Is the US Military’s Favorite Novel a Timeless Classic or Overrated Drivel? Yes. 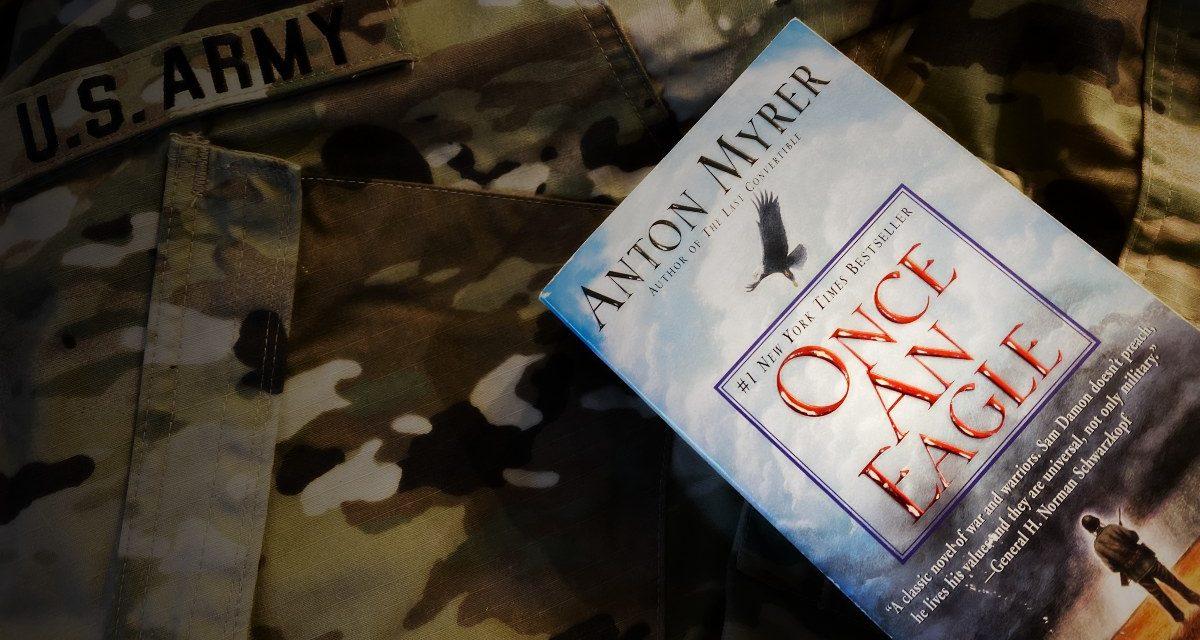 After sitting on the shelf for nearly two decades, it was beckoning me with its siren song again. The last time I’d read Once an Eagle I was a lieutenant and had eagerly devoured Anton Myrer’s ambitious tale of war and peace. But not long ago I felt drawn to pay another visit to Sam Damon, Courtney Massengale, and company to see if their trials and tribulations stood the test of time.

Once an Eagle occupies a special, elite status among military books. It frequently finds itself atop Army professional reading lists, and young officers are urged to absorb it and may even receive a copy as a gift at some point (myself included, once upon a time). Yet it has forceful detractors. Hence many readers of Myrer’s 1968 novel seem to fall into one of two polarized camps: those who believe it is one of the greatest military-themed tales of all time and those who believe it is pure drivel, a soap opera to be avoided at all costs.

Now it might be easier to convince you to keep reading if I take a hard-line stance: either elevate Myrer and his protagonist Damon to godlike status or describe the book as only fit for the burn pit. But neither of those arguments wholly rings true. Intellectual honesty requires the book’s ardent defenders to accept there is notable room for improvement and its harshest critics to acknowledge there is at least something worthwhile in its hundreds of pages.

In truth, this is a book with both meaningful strengths and glaring weaknesses, and it is nearly impossible to consider one side of the equation without the other. The book’s positive attributes are indeed impressive and the novel can be inspirational in some ways. However its flaws are also truly enormous and inescapable. So perhaps one logical way to analyze Once an Eagle is by looking at the good and the bad in turn.

First, Once an Eagle is noteworthy for its sheer scope. Put simply, this is an epic saga of a soldier’s life, from youth to death, including the key decisions he makes and the resulting impacts on those he knows and cares about. Over the course of more than nine hundred pages, the novel spans Sam Damon’s experiences in World War I, World War II, and a burgeoning conflict in Southeast Asia. As it traverses these conflicts, its narrative carries readers to both the front lines and the home front. It include Damon’s experiences in China and the Philippines, unglamorous peacetime assignments in the middle of nowhere, and various personal developments that unfold over a half century. It is difficult to overstate the striking breadth of Myrer’s story.

Inspiring a Lifetime of Service

The novel can help provide perspective and meaning to the notion of service—in Damon’s case, a lifetime of service. Arguably the book’s most memorable passage is a flashback scene in which Damon tells his son Donny: “That’s the whole challenge of life—to act with honor and hope and generosity, no matter what you’ve drawn. You can’t help when or what you were born, you may not be able to help how you die; but you can—and you should—try to pass the days between as a good man.” It is hard to argue with this sentiment, and it reveals the core of Sam Damon: a decent person trying to do the right thing in some extremely perilous situations. Even when Damon realizes at various points that he is engaged in a military campaign that is folly, he remains motivated to do his part because he feels a sense of duty and believes he can likely carry out the mission better than anyone else. Further, Damon’s personal actions are a testament to leading at the tip of the spear and sharing in the hardships with your subordinates. To the extent that Myrer’s novel might inspire young Americans to set a positive example and heed an honorable calling, that should be considered a good thing.

The Book’s Second Half

The novel’s first half is fairly stiff and unimpressive. But it hits its stride in the second half, as events in World War II hit a climax and Damon evolves from noble hero to a sad figure to be pitied. He loses his best friend, Ben. He loses his son. His marriage all but collapses. He loses his virtue when he makes a deal with the devil (Courtney Massengale) from his hospital cot. And ultimately, he loses his life. In this final act of the book, the cumulative effects of his actions fully manifest themselves, helping to make the book more complex and memorable, and altering this from a straightforward hero’s tale into a something that feels more like a tragedy.

Now we move to the other side of the ledger. For starters, let’s be frank: the dialogue in many parts of Once an Eagle feels stilted, groan worthy, and not even remotely realistic. Significant portions of the book read a bit like a soap opera, and some scenes feel as if they are merely setups for the reader to be lectured on the importance of certain principles of war. These latter scenes occasionally seem as if they were teed up to enable Damon or another sympathetic character a platform to do or say something that could practically appear in an Army manual. Such passages weigh the book down. And they occur repeatedly, particularly in the novel’s first half.

This is a more serious problem with the book, and it relates to the contest at its core: the perpetual tension between Damon and his archnemesis, Courtney Massengale. Massengale sometimes comes across as so vile and conniving that it is hard to picture him as a real person, much less one with the four-star general rank he attains. On the flip side, Damon can occasionally come across as a one-dimensional protagonist, a noble warrior competing against an over-the-top bad guy.

But more concerningly, Damon as protagonist also frequently displays a barely veiled contempt toward anyone not serving on the front lines. Those on staff. Those in higher headquarters. And most of all, anyone seemingly tainted by politics. Even within Damon’s military chain of command, the higher-ups are usually portrayed as screwed up, and Damon, at the tactical level, inherently knows the right way forward, though he is repeatedly ignored. In some respects the book could be considered the glorification of all things tactical. Rather than acknowledging Clausewitz’s dictum that war is politics by other means, Myrer’s novel treats politics as something inherently nefarious from the opening chapters. In stark contrast to Damon, Massengale spends much of his career on staff and is supremely knowledgeable about strategy and policy, but as the tale’s bad guy he only leverages his broader understanding to help concoct the next devious scheme. Why does any of this matter? Well, it could lead the reader to conclude that, if you serve on a staff (which practically all military officers do at some point) or show more than a passing interest in broader strategic or political affairs, you may put yourself at risk of being an odious “Massengale.” The novel might also implicitly endorse Samuel Huntington’s objective control model in which there are separate political and military spheres so military leaders should just focus on strictly military affairs. Problematic issues related to this notion have been addressed by Eliot Cohen and Risa Brooks, among others.

Once an Eagle can indeed be worth admiring—well, portions of it, anyway—as long as we also keep in mind the massive, glaring flaws. The novel may very well help inspire readers to pursue a lifetime of service, which is certainly commendable. But it could also promote a narrow grasp of the military profession and a detrimental, simplistic view of civ-mil relations. So I think Once an Eagle is worth reading, but only if readers acknowledge and wrestle with these countervailing dynamics.

I wonder if Myrer’s story could find a new life today if adapted into, say, a high-quality streaming series (the last major televised adaptation having occurred over forty-five years ago). Its scope and girth might lend itself to such an adaptation. And after all, Once an Eagle is seemingly at the pinnacle of works we collectively assign value to from a professional development standpoint. But readers will never derive maximum value from a book without engaging with it critically, and a book without flaws doesn’t exist. Knowing what to read is only half of the professional development equation. The other half is knowing how to read—with eyes wide open and a full appreciation of the good along with the bad.

It seems fitting to close with Sam Damon’s final words, which reflect a recurring theme in the novel: “If it comes to a choice between being a good soldier and a good human being—try to be a good human being.” Despite Once an Eagle’s inescapable flaws, such aspects of Damon’s counsel can still be worthwhile for readers to consider today.

Brendan Gallagher is a US Army colonel currently assigned to the Army staff at the Pentagon. He has served in Iraq and Afghanistan and previously commanded 1st Battalion, 3rd Security Force Assistance Brigade. He earned a PhD from Princeton as a fellow with the ASP3 Program and is the author of The Day After: Why America Wins the War but Loses the Peace (Cornell Press, 2019).