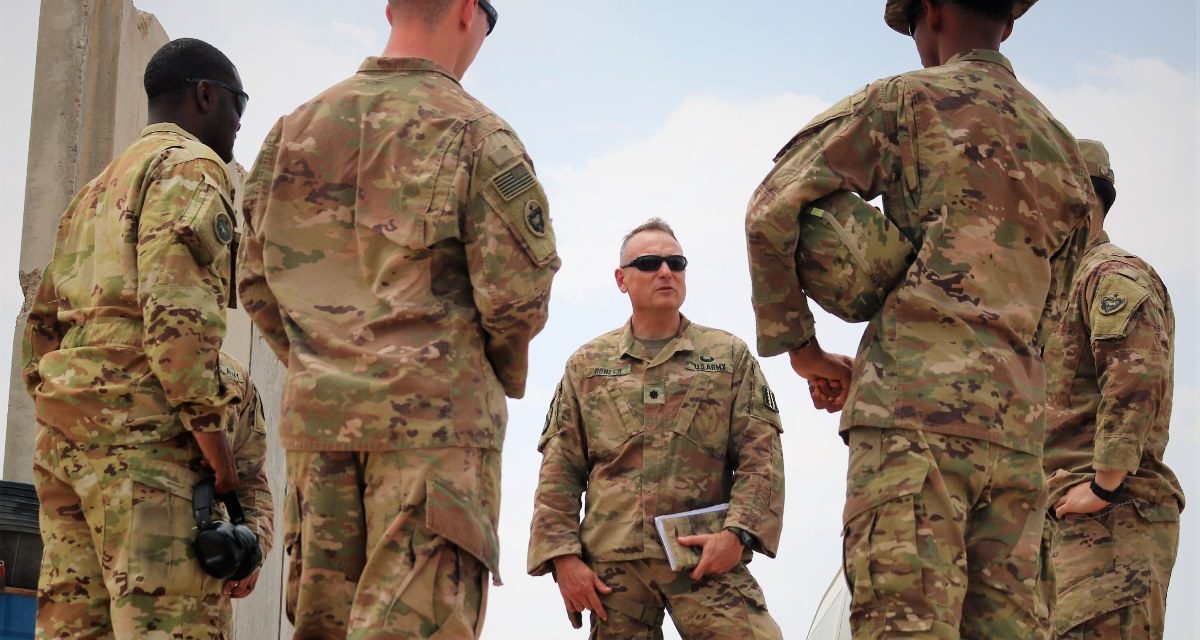 In an isolated camp in Iraq in 2008, I stood nervously in front of my team leader’s barracks door, trying to summon up the courage to knock. I was an infantry private on a weapons squad in the 3rd Ranger Battalion. And I had just screwed up.

I rapped on the door and my team leader, a specialist, told me to come in. Standing at parade rest, I explained that during the previous night’s raid on a suspected enemy compound I failed to fully seat my M4 magazine in my weapon after I cleared it to board the helicopter that would take us home. The magazine fell out onto the desert floor, and by the time I noticed this the helicopter was already airborne. It was too late to fix my mistake.

My team leader thought for a moment. I tensed in anticipation, expecting a blistering reprimand. Instead, he simply replied, “Don’t let it happen again.”

“I won’t, Specialist,” I replied, shocked and relieved.

He continued, “You know this would be a very different conversation if I had to find out from someone else, don’t you?”

I couldn’t articulate it at the time, but my team leader had just modeled engaged leadership. Having worked with me for several months by that time, he knew I was not reckless with my gear and felt guilty about overlooking even the smallest details. He also knew I would learn from my mistake. With those aspects of my particular personality in mind, he adapted his response accordingly.

My team leader was not one to coddle his subordinates. He drove me to perform my duties as a Ranger and never settle for anything less than exceeding the standard. The difference between him and many of his peers was that he actually paid attention to me as a complete person, not just as a Ranger private. He listened. He rewarded strong performance. To this day, he is the only person who has taken the time to write a counseling statement just to tell me what I was doing well. He encouraged my healthy hobbies, even those that had no bearing on work. When he corrected me, it was not to crush my soul but to improve my character and competence.

The single factor that set him apart was that leader engagement was a point of pride for him. It wasn’t optional, nor was it a sign of weakness. It was an expression of strength. He took the promise of the Ranger Creed never to fail his comrades seriously. Yes, I was his subordinate, but I was also his comrade.

Leader Engagement: The Key to Belonging

My current unit, the 2nd Infantry Brigade Combat Team, 82nd Airborne Division, recently conducted an internal survey to understand the drivers of and obstacles to organizational trust among paratroopers within the brigade. We found that the most critical element in cultivating a sense of belonging and ownership among our paratroopers, especially at the platoon level and below, is leader engagement. The unit brand—maroon berets, jump boots, and even the legacy we inherit from the heroes of World War II—only goes so far. What really matters to servicemembers is feeling that their leaders value them as human beings.

Our organizational culture study continues to bear this out. For example, we asked our paratroopers, “What can we do to make you feel safer?” While some of them recommended physical improvements such as better lighting in and around barracks, most responded that all they wanted was for their supervisors to be more approachable. Approachable leadership produces a layer of psychological security for subordinates that no amount of physical security, while important, can emulate. Our junior enlisted paratroopers recognize this instinctively.

As we dug deeper, we found that most of our paratroopers feel they can tell their immediate supervisors when something is wrong and leaders respond swiftly to get them the help they need. However, this level of engagement often only takes place after a negative incident has occurred. Day-to-day leader engagement in the absence of catastrophe is lacking.

It takes little imagination to see how improving leader engagement before a negative incident would radically improve our ability to address corrosive behaviors and tragic outcomes such as sexual harassment and assault, substance abuse, discrimination, and suicide. Engaged leaders are attuned to subtle behavioral changes and are more likely to notice warning signs early. Engaged leaders are also approachable, giving their subordinates the freedom to seek help early rather than wait for something tragic to happen.

So, what does engaged leadership look like in practice? As I have argued elsewhere, engagement in any form consists of a recurring three-step process: (1) Pay close and deliberate attention; (2) Gain sufficient understanding to act effectively; and (3) Act assertively and responsibly. When intentionally applied, this engagement cycle never fails to yield useful information, cultivate meaningful relationships, and create opportunities for influence. This is nowhere more applicable than in leadership.

Leader engagement is a continuous cycle of deliberately paying attention to the individuals under one’s care until a sufficient understanding of their particular characteristics is achieved to lead them effectively. In other words, rather than simply acting on knee-jerk assumptions, engaged leaders get to know their subordinates as individuals through watching and listening. This builds an understanding of each of those subordinates and reveals facets of their personalities not readily apparent on the surface. Paying attention is the most critical step in this cycle because it is the engine that drives the rest of the process.

This is especially relevant when it comes to enforcing standards and discipline. It is not enough to publish standards and expect compliance without considering the strengths, weaknesses, and circumstances of individuals. Of course, we must establish and enforce standards. It is also critical that first-line supervisors know their subordinates well enough as individuals to identify roadblocks to meeting those standards and tailor their corrective measures accordingly. Maybe trigger squeeze isn’t the reason your soldier is failing her weapons qualification. Maybe she struggles to focus on her sight picture because her body armor doesn’t fit.

In addition to building understanding for effective action, paying attention to individuals yields psychological benefits for all involved. To pay attention to others is to signal genuine concern for them. It is to recognize their humanity and validate them as worth listening to. It signals one’s intention to engage honestly and implicitly demands the same from others.

This engagement cycle is what differentiates caring from coddling. To coddle is to insult a subordinate by signaling, You don’t have what it takes, so I’m not even going to try. It is disengagement and indicates fear and laziness. To care, on the other hand, is to take up the burden of leadership. It is to know one’s subordinates and understand their strengths and weaknesses. It is to leverage that knowledge to act effectively in their best interests and that of the organization, driving all involved toward excellence. To care is to project strength and vitality.

A Point of Pride

The US military must normalize leader engagement as a point of pride, and we do that through our everyday words and actions. We must be willing to insist that you are not a real leader unless you engage your subordinates personally and meaningfully. You are incapable of achieving the necessary degree of lethality and readiness unless you are intimately aware of what makes those who follow you tick. You cannot command until you learn how to pay attention to those you are charged with leading. You are not a true patriot unless you give a damn about those your country has entrusted to your care.

Seeing leader engagement this way, as a noble challenge rather than an annoying obligation, instills pride in both leaders and subordinates. When leaders know their people well enough to tailor their leadership styles appropriately, and when subordinates feel their leaders are approachable and trustworthy, each grows in their sense of value and belonging. Just as combat strengthens the bond between comrades who emerge having proven worthy of each other’s trust, engaged leaders actualize the esprit de corps necessary to a cohesive organization. That sense of belonging doesn’t just come from a unit crest. It grows out of trust between leaders and the people entrusted to their care. And building trust starts with paying attention.

Capt. Andrew Bibb is a civil affairs officer in the 82nd Airborne Division who has deployed to Iraq, Syria, Afghanistan, the Arabian Peninsula, and Latvia. His work has been published in Small Wars Journal, the Civil Affairs Association’s Eunomia Journal, and the US Congressional Record.