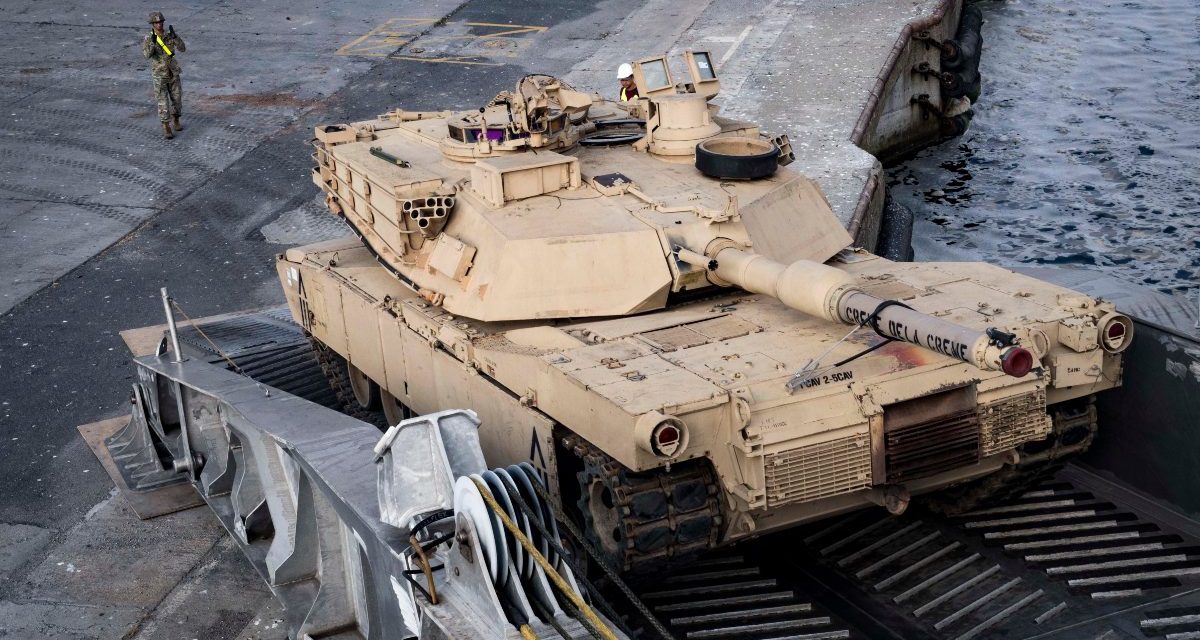 The People’s Liberation Army Navy is rapidly growing in size, capability, and demonstrated aggression—with no apparent signs of slowing down. China’s continuous construction of Type 052D destroyers, Type 055 cruisers, a third aircraft carrier, and several more frigates—combined with increasingly aggressive maneuvers meant to intimidate its neighbors—increases the challenge for the US Navy to effectively respond in a geopolitical crisis with China in the Indo-Pacific. Meanwhile in the United States, a ballooning national debt, exacerbated by an uncontrolled pandemic, threatens to flatten, if not decrease, the US military budget in the years to come. With China as the 2018 National Defense Strategy’s pacing threat and the Indo-Pacific region as the corresponding theater of operations, analysts—and even the chairman of the Joint Chiefs of Staff—have acknowledged that the Army must be prepared to adapt to a supporting role to the Navy’s strategic primacy in the years to come.

While the Army must rightly fight for its appropriate share of the defense budget to meet its mandate under the 2018 National Defense Strategy, the comments from the senior-most US military officer—an Army officer—must be taken seriously by planners. At a minimum, the Army would be wise to plan to meet its NDS-derived mission requirements with a reduced budget. With proper planning and analysis, the Army can determine where it can assume and mitigate risk toward its enduring strategy should it be forced to reduce its budget. Some observers conclude that in upcoming fiscal year budget battles, the Army and Air Force must be prepared to sacrifice up to $10 billion per year to support the Navy’s Battle Force 2045 plan calling for five hundred manned and unmanned vessels to combat rapidly growing Chinese naval capabilities. In a worst-case scenario in which DoD looks to the Army to provide a majority of that $10 billion annually, it would be prudent for the service to have a plan that preserves capability and the force structure that is most closely matched with the Army’s mission requirements. This analysis is based on such a scenario and assumes a requirement to find 75 percent of the funds necessary to implement Navy shipbuilding plans, or around $7.5 billion, in the Army budget.

A regional approach to meeting critical US interests will help the Army to determine its force strength requirements and clarify both the force structure that is vital to preserve and that which it should consider cutting if budgetary pressures require it. Such an approach must acknowledge two truths. First, to meet its service component obligations even amid the looming budgetary headwinds, the Army must first and foremost prioritize its force structure and ability to conduct large-scale combat operations with armored forces in Europe. Secondly, the Army should prepare to provide highly capable supporting enablers in the Indo-Pacific. Following these regional force structure prioritizations, the Army will find that the best way to meet its mission requirements while weathering the storm of fiscal constraints will be to consider divesting itself of three or more of its light infantry brigade combat teams (IBCTs). Taking this step while maintaining a clear emphasis on the two regional priorities would preserve the Army’s critical wartime responsibilities in the most important regions of geostrategic consequence while providing over $7 billion in cuts to support the US Navy’s expanding shipbuilding operations.

As the United States prioritizes its long-term strategic interests in the Indo-Pacific, the European continent will remain a vital secondary theater for US interests in great power competition. US interests in Europe lie primarily in securing the territorial and political integrity of NATO allies and other key regional partners. If competition with Russia, as the most capable potential adversary, escalated to conflict, the Russian military would likely challenge US strategic interests in a primarily ground-based campaign—with important but ultimately supporting campaigns in the air and sea. The US Army must preserve its ability to conduct traditional combined-arms maneuver in large-scale combat operations in the European theater to secure and defend key US interests in the region. While the US Marine Corps contains unique amphibious capabilities well suited for the Indo-Pacific, it does not have the logistical capability or force structure to operate with strategic overmatch against Russian ground forces in Europe. Therefore, the Army should regionally focus on Europe to meet strategic US objectives that cannot be adequately defended by any other service component to the same capacity.

While there are multiple potential approaches to determining appropriate force structure prioritization, the traditional ground maneuver requirements of a European collective defense scenario promote stratification among the Army’s three main combat formations. Heavy armored brigade combat teams (ABCTs)—composed of M1 Abrams, M2 Bradleys, M109A7 Paladin artillery platforms, and logistical support—are the most lethal of the three, and will thus serve as the centerpiece for seizing terrain and defending key positions in a European conflict scenario. Medium Stryker brigade combat teams (SBCTs) will likely play an important supporting role by leveraging their mobile antitank-capable squads to quickly attack and defend urban objectives and other pieces of restricted terrain. Light infantry brigade combat teams, which do not have the organic capability to move infantry forces without significant external support, will likely play a more limited role by defending severely restricted terrain and conducting airborne and air assault operations in support of decisive combined-arms maneuver by ABCT units. With Europe as its most important geographical area of focus, the Army must prioritize protecting its eleven active duty and five National Guard ABCTs in upcoming budget analyses.

Indo-Pacific Second: Prioritizing Key Enablers to Support the US Navy

The Army should place the Indo-Pacific as its secondary region of focus to support and complement US Navy and Marine Corps operations throughout that area of responsibility. Rather than providing forces for traditional combined-arms maneuver, the US Army must be prepared to provide critical enablers to support the primary service components throughout the region. Namely, the Army must be able to deliver long-range precision fires, logistics, cyber capabilities, special operations forces, and security force assistance in competition or conflict with the Chinese military. These Army enablers would support the US Navy and Marine Corps campaigns of sea control and sea denial against the Chinese navy. Open conflict with China, with the notable exception of an unlikely large-scale war on the Korean peninsula, will not likely require traditional ground-based maneuver forces from the Army at scale. Instead, amphibious forces from the US Marines will employ expeditionary advanced base operations to support the Navy’s operations of sea denial or prevent Chinese naval forces from seizing control of vital waterways throughout the Indo-Pacific. By supporting the US Navy and Marine Corps with enabling capabilities, the US Army will achieve mission success in its supporting role during conflict or competition in the region.

Using a regional approach to determine force structure requirements, the US Army appears overinvested in light infantry forces. IBCTs provide only limited utility in either theater of war—they are not mobile enough to move and maneuver on their own power within Europe, nor do they carry the natural amphibious capability of the US Marines to provide significant use in the Indo-Pacific. If required to reduce annual costs, then, the Army could save over $7 billion annually while preserving critical warfighting capabilities in both Europe and the Indo-Pacific by being prepared to cut three IBCTs and their supporting units. To do this, the Army could, for example, reduce each light infantry division in the 18th Airborne Corps from three to two IBCTs each. At $2.41 billion total annual costs apiece, this would save DoD a total of $7.23 billion per year. For additional cost saving measures, the Army should also consider permanently basing an ABCT in Korea and another in Europe, rather than relying on more expensive nine-month rotations that provide questionable combat capability. This could save DoD an additional $270 million per year while providing Korean and European allies a more visible sign of American collective defense commitment.

While some analysts may argue that cutting three IBCTs is too drastic a measure, this would still leave the active-duty force with ten IBCTs in total, with another eleven ABCTs and seven SBCTs in the active component. When National Guard units are added, IBCTs would still form a significant majority of the total combat force—thirty IBCTs, sixteen ABCTs, and nine SBCTs in total. Additionally, the US Army has touted the ability to rapidly convert any one of its six security force advisory brigades into a BCT with newly trained soldiers in a time of crisis—transforming into an IBCT would be the quickest and least expensive option. Although perhaps not impossible, it seems unlikely that the Army would find itself in a military conflict in the near future where it would be short of IBCTs.

While reducing Army force structure may be a politically and institutionally challenging undertaking, changing expectations about the future global operational environment—specifically the prioritization of naval power—make planning for it a necessity since the Army could face consequent budget reductions in upcoming fiscal years. Alternative options, such as significant reductions to recent modernization efforts, risks threatening US overmatch against adversary forces in long-range fires, air defense, and other capabilities. Additionally, with the Army’s recent and numerous “night court” iterations effectively eliminating $33 billion of redundant and low-priority programs, the likelihood of discovering additional easy cost savings seems minimal. And while the operational and maintenance budget may be the most politically permissive program to significantly reduce, since it precludes the loss of valuable jobs within congressional districts, this reduction would lead to a hollow Army—insufficiently trained, ill equipped, and unprepared to fulfill its wartime mission in the event of a geopolitical crisis. While a regional approach to force structure prioritization is surely imperfect, it provides a useful framework for the Army to understand what forces it must protect, and what it should strongly consider reducing during possible upcoming budget reductions. Following this approach, the Army will recognize that it must preserve its armored forces capable of large-scale combat operations in Europe and critical enablers for contingency operations in the Indo-Pacific.

Capt. Harrison “Brandon” Morgan is grateful for the opportunity to command the soldiers of Attack Company, 1st Battalion, 18th Infantry Regiment, 1st Infantry Division. His operational experience includes a nine-month rotation to the Republic of Korea as a company commander, a nine-month rotation as the 1st Infantry Division’s liaison to the Republic of Lithuania, and a nine-month deployment to Iraq as a platoon leader with the 82nd Airborne Division. He served as a 2019–2020 Modern War Institute fellow, and tweets at @H_BrandonMorgan.