LOTS to Be Desired: Why the US Army Needs to Invest in Logistics Over-the-Shore 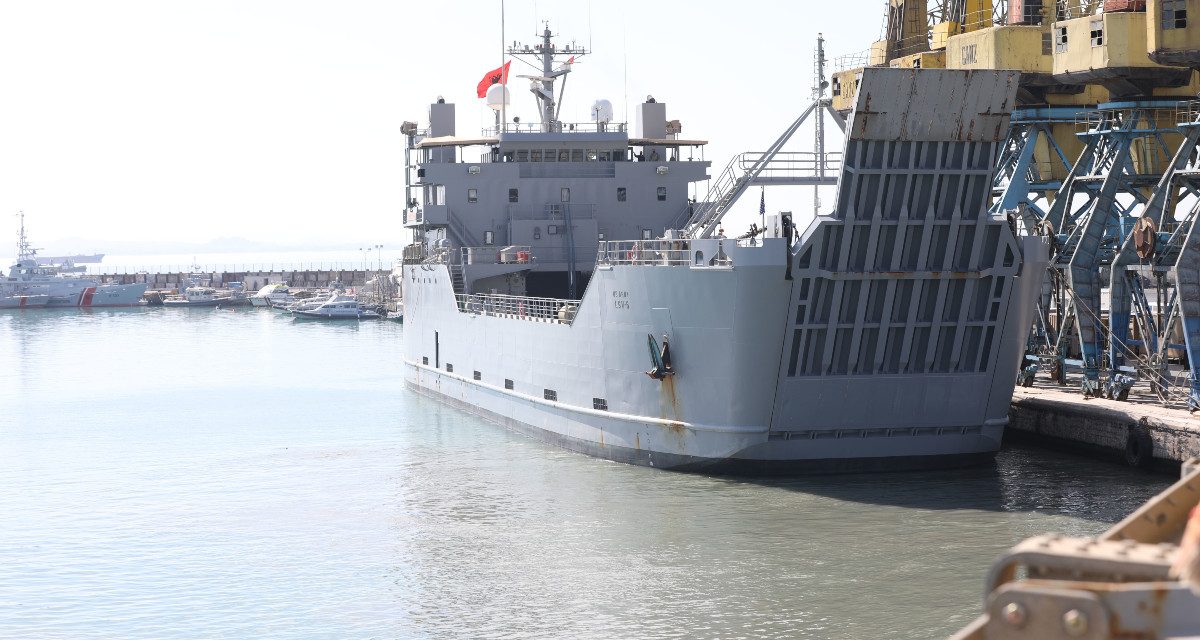 On March 24, a sudden explosion hit the Ukrainian port of Berdyansk. As tanks at the end of a pier burned, satellite imagery confirmed that what the Ukrainian military claimed was a strike conducted by its forces had sunk a Russian logistics ship and damaged two others. Among the many lessons the US military should be learning from the way the war in Ukraine is unfolding, this episode highlights a particular one. To increase flexibility, enhance survivability, and reduce risk of impact to allied, partner, and host nations in future operations, the Army must invest in more logistics over-the-shore capability.

Logistics over-the-shore, or LOTS, is essentially about benefiting from a wider array of options when existing facilities are limited or unavailable—being able to load and unload ships outside of fixed ports. The US military’s own history further validates the need for more of this capability, particularly because it has one of the most sustainment-heavy tooth-to-tail ratios in the world. The Korean War, for example, exposed the two extremes of force structure composition when the American forces, as the cornerstone of United Nations Command, fought waves of Chinese forces. Supported by massive amounts of supplies brought by train and truck from major ports, American forces were effectively road-bound for logistics; meanwhile, the Chinese emphasized cross-country mobility to reduce impacts of the United Nations Command air interdiction. One key factor for success of UN forces’ offensives to reclaim the 38th parallel in the spring of 1951 was a steady stream of logistics arriving through major ports on the peninsula. Given the evolution of combat forces to a force structure optimized for Multi-Domain Operations and the accompanying high demand for just-in-time logistics, an approach used in 1950s Korea seems much less sustainable today to support large-scale combat operations.

The well-known experience of the Pusan Perimeter in 1950 demonstrated the necessity to retain a port to project and sustain forces quickly in a battlespace. Quickly re-creating disbanded logistics commands to support operations moving forward, ports downloaded resources using whatever local manpower was available onto trucks and trains for movement north. The key to success in Pusan was the time and space created to establish the logistics that enabled future operations. Airpower and seapower kept North Korean forces far enough away that they could not target ships in harbor to slow the mobilization of United Nations Command forces. That left the only risk to the force as the complete overrunning of the peninsula by North Korean forces. Through luck and determination, the perimeter held North Korean forces at bay, which enabled logistics to flow essentially risk free.

In Vietnam, during the Cambodian Campaign of 1970, port constraints nearly derailed operations after restrictions prevented ammunition download in Newport, Saigon. Vietnamese hosts balked at the net explosive weight of the ammunition being delivered. Due to this constraint, US Army Vietnam (USARV) logisticians dedicated additional truck resources and more time to movement supporting two corps operating in the Cambodian border region. Theater and operational logisticians tasked with opening and setting the theater incorporated ammunition regulations into planning. However, USARV may have generated more logistics options if it had the option to establish improvised and temporary port facilities, which would have reduced the impact of host nation civil authorities on tactical operations. Organic nonfixed port facilities reduce the number of friction points, providing fewer reasons for a host nation to say no to a course of action. It also generates options for the sustainer to say yes to the supported maneuver force.

Later, during two wars separated by more than a decade, US forces in Iraq used commercial ports to download huge quantities of supplies. In the first Gulf War, US and coalition forces used Saudi Arabia to build up combat power in the region over the course of five months. Ahead of Operation Iraqi Freedom, forces used Kuwait to build up combat power in the region, again for about five months. This demonstrates again the American preference for building up sustainment in relative safety before launching a grand offensive to achieve victory. Benefiting from hindsight in both cases, the preparation time far exceeded the time required to accomplish the operational mission; such a permissive timeline was critical to mass requisite logistics. Both scenarios used commercial ports in neighboring states to protect key sustainment nodes from threat of enemy action. While modern weaponry such as ballistic missiles existed that could have threatened the ports, the diplomatic boundaries reduced actual risk to the force.

American forces have largely enjoyed relatively robust, multimodal, and unthreatened logistic lines of communication at the operational level in its recent operations, while expeditionary logistics—particularly from the sea—have atrophied. This is all the more worrying because the risk to a contested port of debarkation can still seriously hamper operational tempo. The March strike that sank the Russian ship Saratov in Berdyansk was no doubt a publicity win for Ukrainian forces, but the effect was more significant than just a lost ship and a video of a frantic dash afloat. For Russia, not only are limited logistics assets facing attrition—supporting a force demonstrably lacking logistics capability for force projection—but now the port is effectively blocked. The invading Russian forces likely planned to utilize the port to sustain operations in the area for an extended period of time, which could ensure Russian forces could completely control access to the Sea of Azov. With fewer ships, such an effort will be significantly more expensive and more problematic, adding quantity to roads and rails that are already seemingly taxed. With a sunken ship clogging a key berthing point in an embattled port, resupply over the water is likely unavailable along that portion of the coast for the foreseeable future. Once the area is secure enough to operate, it will likely take weeks or longer to clear the ship, assuming the capability to do so exists in the area.

While the precise weapon system used to sink the Russian ship has not been confirmed, the incident illustrates a reality that the US military must face—that of long-range attacks on logistics nodes. One method is to increase protection assets supporting these nodes. This clearly is an important approach that should continue to be developed. Unfortunately, protection is likely to be episodic in large-scale combat operations, while limited extended range air and missile defense assets are already challenged to fulfill the persistent global demand signal. To manage this risk, the Army needs to commit to an approach that maximizes survivability and flexibility and not cling to the assumption that guaranteed sufficient contracted port support will exist. This means the Army needs to expand beyond its two (one active and one reserve) expeditionary transportation brigades, where watercraft and floating pier assets primarily reside. Increasing watercraft and pier capabilities creates more flexible options for commanders in all combatant commands for force projection beyond established ports, enabling temporary or more long-term logistics over-the-shore, thereby extending operational reach. Additionally, increasing logistics over-the-shore capabilities and combining themed with contracted port activities increases survivability by spreading risk. The additional requisite watercraft would also expand riverine logistics opportunities. Not only does such an approach increase enemy targeting requirements, but it also reduces distribution congestion from each location. Further, not imposing as significant a demand on host nation port capacity avoids disrupting local economic activity and supports humanitarian assistance delivery. Finally, it also reduces the operational, strategic, and political risk of a sunken ship blocking major port activities; were a ship to be targeted during logistics over-the-shore operations, the wreckage would not block key civilian infrastructure in the same way as a ship lost in a major trade port.

In reality, this flexible and survivable logistics approach is just a natural continuation of modernization efforts directed by the 2018 National Defense Strategy and the 2022 version recently delivered to Congress. If the Army wants to be able to enable forward maneuver it needs to invest in the capabilities that make it less predictable to an adversary and therefore more survivable. As the 2018 National Defense Strategy specified, the joint force must transition “from large, centralized, unhardened infrastructure to smaller, dispersed, resilient, adaptive basing” and increasing watercraft provides an option. It also states that the force must emphasize “non-commercially dependent distributed logistics” to support operations on the new battlefield. While contracting will still play a large role in logistics operations, it can no longer be the only option for our modern force. A future battlefield—especially one in the Indo-Pacific region—will likely require a flexible mix of contracted fixed port facilities combined with military nonfixed port facilities to download commercial ships of the National Defense Reserve Fleet’s Ready Reserve Force rapidly to an expanded number of trucks and trailers supporting the force. This is a critical step toward meeting the 2022 NDS’s call to build enduring advantages for the future joint force. While there is still the risk of observation during movement and operations, especially in an antiaccess / area-denial environment, the logistics over-the-shore capability provides a level of ambiguity not provided by fixed ports.

The planning assumptions involved in relying on major fixed ports for logistics operations in large-scale combat operations may be obsolete, at least as a primary option. Weapons technology, proliferation of satellite intelligence, and social media make targeting of major ports significantly easier now than in the past. Now is also an optimal time to begin work toward a robust logistics over-the-shore capability, given the US Army’s shift to Multi-Domain Operations and the US Marine Corps’s Force Design 2030, which calls for joint-enabled logistics to support what the Marine Corps calls “stand-in forces.” By pursuing new platforms like the Maneuver Support Vessel (Light), the Army is trending in the right direction. But while new platforms are beneficial, Army force structure must also be adapted. Senior leader emphasis will need to continue in order to fully realize the Army’s sustainment capacities as a multidomain, multimodal sustained, Joint Force multiplier.

Major Garrett Chandler, an Army logistician, is completing his studies at the School of Advanced Military Studies. He previously served as the course director for the Army’s Supply Chain Management and Master Logistician courses at Fort Lee, Virginia. He holds a master’s degree in supply chain management from Virginia Commonwealth University and a graduate certificate in business analytics from the University of Nebraska–Lincoln. His next assignment is 4th Infantry Division, Fort Carson, Colorado.

Major Matthew Carstensen, an Army strategist, is also completing his studies at the School of Advanced Military Studies. His previous assignment in Germany centered on NATO interoperability and logistics integration in Europe. His next assignment is US Army Pacific, Fort Shafter, Hawaii.