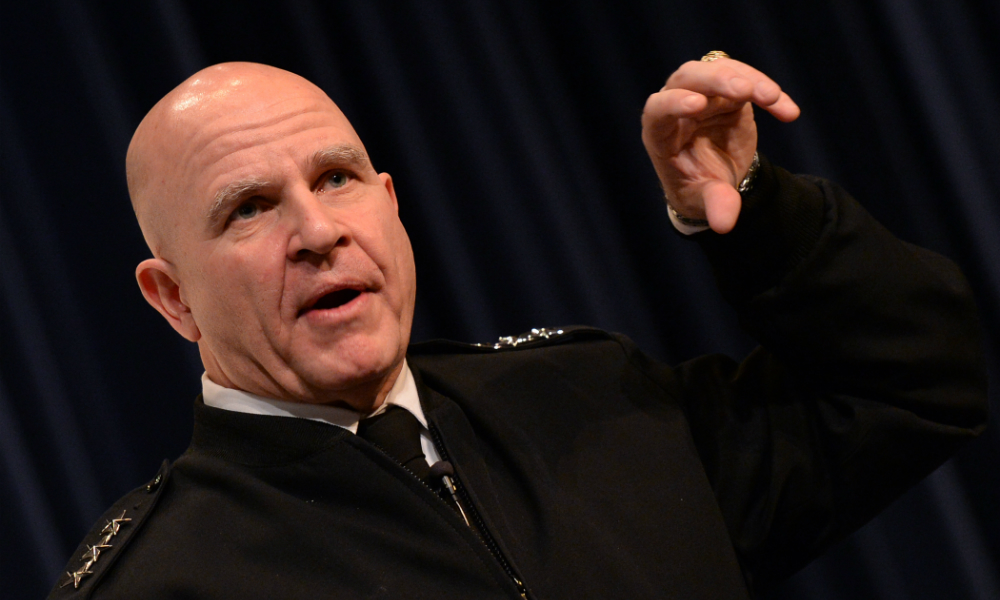 When President Donald Trump named Lt. Gen. H.R. McMaster as his new national security advisor, many celebrated the choice, particularly in the context of the tumultuous and remarkably short tenure of his predecessor, retired Lt. Gen. Michael Flynn. Since the announcement, very specific forms of praise he has earned over a distinguished military career have taken center stage in media coverage: he is “a soldier’s soldier,” “a warrior-thinker,” and in a nod to perceived instability among the administration, “a certified, card-carrying grown-up.” From his impressive performance as a troop commander in the First Gulf War’s Battle of 73 Easting to his leadership during the 2005 Battle of Tal Afar and beyond, his military career has been marked by achievement and well-deserved accolades.

McMaster is best known for his book, Dereliction of Duty, in which he sharply criticizes the political leadership of the Lyndon Johnson administration for its prioritization of domestic political considerations over sound strategic thinking—and more noteworthy, senior military officials for their apparent acquiescence in their own marginalization. His book creates a unique backdrop for his coming tenure working every day just steps from the Oval Office.

As national security advisor, of course, he’ll be out of the military chain of command, and while he’ll continue to wear the uniform, he’ll be something separate from the military. But his advice will potentially influence the force—everything from its size and composition to the missions it trains for and conducts—more greatly than that of senior officers in the Pentagon who remain within their military services, particularly if he succeeds in gaining entry to the small circle of advisors the president is said to be most comfortable depending upon.

This likelihood, along with his most recent role as director of the Army Capabilities Integration Center—an organization charged with “ensur[ing] the Joint Force wins in future armed conflict”—combine to make his views on the future of warfare of considerable interest. In 2015, McMaster wrote an article for Military Review in which he examined the then-recently published US Army Operating Concept and its suitability to meet the demands of America’s future wars. The article offers an exceptional window into the way he will frame the critical national security issues on which he will advise the president.

As a student of history—he earned his PhD in American History from the University of North Carolina—McMaster appreciates what he calls “the continuities in the nature of war.” These continuities, he wrote, include that (1) war is political, (2) war is human, (3) war is uncertain, and (4) war is a contest of wills.

But while war remains characterized by these constants, warfare is fluid. Strategists and planners too often fall into the trap of preparing for the last war. This is not a particularly profound recognition. But failure to plan accordingly, McMaster argues, has led to four “fallacies” of future war. “Those fallacies,” he writes, “are based in unrealistic expectations of technology and an associated belief that future wars will be fundamentally different from current and past wars.” So what are these fallacies?

The first, which McMaster dubs the vampire fallacy because it “seems impossible to kill,” was manifested most recently in the “revolution in military affairs” of the 1990s, but can be traced back to the strategic bombing theory that emerged almost a century ago. In its most current formulation, “concepts with catchy titles such as ‘shock and awe’ and ‘rapid, decisive operations’ [have] promised fast, cheap, and efficient victories in future war,” McMaster explains. “Information and communication technologies would deliver ‘dominant battlespace knowledge.’”

Where does this thinking go wrong? It ignores the enduring necessity to be able to deploy an expeditionary ground force to directly respond to adversaries. The vampire fallacy “confuses targeting enemy organizations with strategy,” according to McMaster. “Although targeting from standoff range can disrupt enemy organizations, strikes often embolden rather than dissuade enemies unless credible ground forces are available to compel an outcome.”

This should not suggest McMaster is guilty of service parochialism. He makes clear that Army forces must integrate organically within larger joint teams. But high-tech solutions that promise easy victory in our wars should not be allowed to obscure the central role that ground forces will continue to play in the wars our military is asked to fight in the future.

Like the vampire fallacy, the Zero Dark 30 fallacy “elevates an important military capability . . . to the level of strategy”—in this case, military raids. While attractive to decision-makers for a variety of reasons, raids can both be immensely successful tactically and, unfortunately, look to be a viable substitute to the conventional joint capabilities that are integral to effective strategy.

“Because they are operations of short duration, limited purpose, and planned withdrawal,” McMaster writes, “raids are often unable to affect the human and political drivers of armed conflict or make sufficient progress toward achieving sustainable outcomes consistent with vital interests.”

This fallacy, which earns its name from the tendency of Marlin Perkins, host of the 1960s nature show Mutual of Omaha’s Wild Kingdom, to rely on his assistant when an episode required close proximity to dangerous wildlife. Too often, McMaster argues, US forces operate as Perkins does, depending on proxy forces to do the dirty fighting on land.

Proxies are and will continue to be key to US military action in future wars, of course. “There is no doubt that security force assistance, foreign internal defense, and combat advisory missions will increase in importance to national security,” McMaster acknowledges. “It is difficult to imagine future operations that will not require Army forces to operate with multiple partners.” But relying on partners to play the central role in military operations is problematic for one very particular reason—“insufficient capabilities or lack of will based on incongruent interests”—a challenge that our recent history in Iraq, Afghanistan, Syria, and elsewhere shows is not easily overcome.

The fourth and final on McMaster’s list of fallacies is a function of the apparent possibility of simply opting out of messy wars. He warns against “the application of exclusively standoff capabilities to complex land-based problems in war.” He frames the problem posed by such an approach with a maxim whose seemingly obvious truth is perhaps partly to blame for the too-frequent failure to adhere to it: “Wars often choose you rather than the other way around.”

Capable military force is a fundamental requirement for effective deterrence, and capable ground forces remain integral, particularly “as joint force freedom of movement and action in the maritime, air, space, and cyber domains become more contested,” and as hybrid threats in the gray zone are on the ascendant. “Army forces are particularly valuable in deterring those who might be tempted to wage limited war to accomplish limited objectives,” McMaster writes. “That is because the forward positioning of capable ground forces elevates the cost of aggression to a level that the aggressor is unwilling to pay and prevents the aggressor from doing what Russia has in Ukraine—posing to the international community a fait accompli and then portraying its reactions as escalatory.”

Throughout McMaster’s article, and despite the fact that he was specifically examining the Army’s operating concept, he makes clear his view that the Army must operate as part of an effective, joint force. But he makes equally clear that these fallacies, and their consequent de-prioritization of ground forces, are inherently reckless. Of course, with his expertise on the marginalization of senior Army officers during the LBJ administration, he knows as well as anybody the possibility that his understanding of the future battlefield could find little traction within the White House. But if he does succeed in establishing his role as a trusted voice in the Oval Office, the four fallacies of future war he identified will shape the way the US Army—and the military as a whole—train for, equip for, and fight America’s future wars.

John Amble is editorial director of the Modern War Institute. He is an officer in the US Army Reserve and a veteran of Iraq and Afghanistan.