Mara Karlin Advises on How to Build Militaries in Fragile States 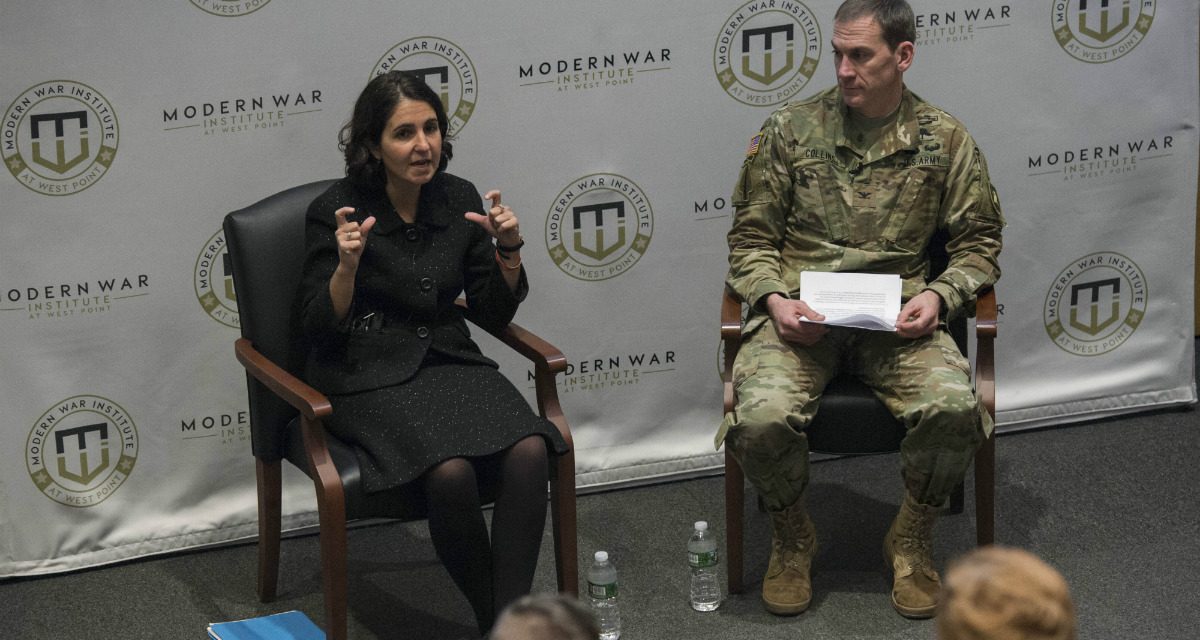 Dr. Mara Karlin has served under five administrations and secretaries of defense. Having spent so much time in the Pentagon, and having written a new book, Building Militaries in Fragile States: Challenges for the United States, she shared her insights with cadets on January 15. She discussed how her experience in the Department of Defense shaped her research agenda as a scholar of strategic studies. About 100 cadets and faculty attended the Modern War Institute Speaker Series event, which was moderated by MWI Director Col. Liam Collins.

Dr. Karlin is a nonresident senior fellow at the Brookings Institution and associate professor of strategic studies at the Johns Hopkins School of Advanced International Studies. At the Pentagon, she previously has advised on policies spanning strategic planning, defense budgeting, future wars and the evolving security environment, and regional affairs involving the Middle East, Europe, and Asia.

According to Dr. Karlin, a key challenge of the post-9/11 era is how to effectively build partner militaries, given the misplaced incentives and global complexities of the current order, but also American sensitivities to casualties, an unpredictable fiscal climate, and the greater array of transnational threats.

However, she argued that our record on training and equipping these militaries going back to the Cold War is far from stellar, pointing to failures in South Vietnam, Lebanon, Pakistan, and other fragile countries. US policies should reflect research into sensitive areas of how foreign militaries are run, which includes how they promote capable leaders, how they define the mission, and their organizational structure. “Who runs things matters,” she said. It’s also important to regularly reassess these militaries and the process of training them.

An example of a success story of how the US military rebuilt and trained a military in a fragile state is post–World War II Greece, whose ravaged landscape at the time, Dr. Karlin said, resembled present-day Syria, and yet the United States was able to train its military to defeat a communist insurgency and professionalize its officer corps.

“These days, the commonly accepted narrative in Washington for security assistance in fragile states can be summed up in one word: ‘more.’ More training, more equipment, more money, more quickly.”

A key component to these missions is mitigating against third-party actors that may want these fragile states’ militaries to remain fragile.

Her message was not merely one of doom and gloom, noting that the United States still can rely on its large number of international allies, unlike our near-peer competitors like Russia or China.

“Initially I disagreed with her advocacy for increased US involvement in the domestic and military affairs of other nations,” said Cadet Elizavetta Fursova, 2021, H3, “but her argument regarding US internationalism made me question why I held those beliefs. Specifically, her assertion that ‘limited US involvement will yield limited impact’ made logical sense to me, as did the statement that ‘state-building endeavors are inherently political endeavors,’ and we must thus become involved in issues or areas that are often considered ‘too sensitive.’”