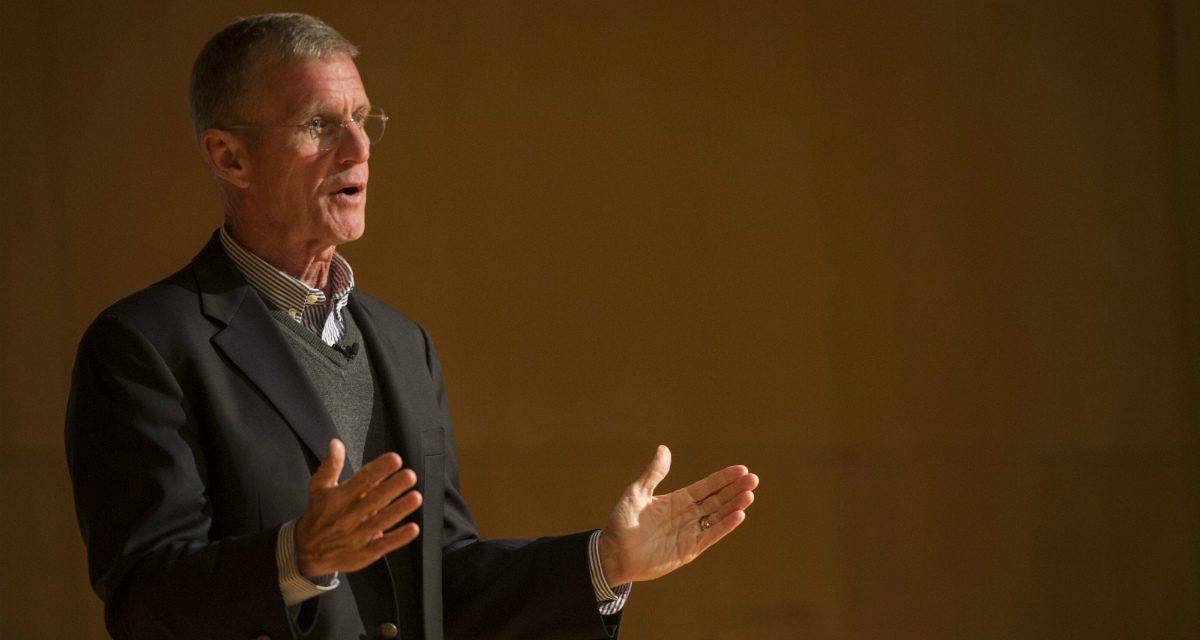 On Tuesday, March 19, retired Gen. Stanley McChrystal addressed a packed Robinson Auditorium of cadets to as part of the Modern War Institute’s annual Wedemeyer Strategic Lecture Series. Gen. McChrystal’s thirty-four-year career as an infantry and special forces officer culminated in his command of the International Security Assistance Force and US Forces-Afghanistan. Before that role he served as the director of the Joint Staff and as the commander of the Joint Special Operations Command (JSOC).

Drawing on lessons from historical figures ranging from Coco Chanel to Albert Einstein, he discussed gaps in how our society thinks about leadership, specifically the tendency to mythologize people who are often very human, complex, and flawed.

“We create and believe myths,” he told cadets. “The power of myth is extraordinarily strong yet sometimes dangerous.”

To illustrate his point, he discussed a framed picture of Robert E. Lee his wife gave him long ago that he hung in the den of his house, which was around the corner from where Lee grew up. He decided to throw the portrait out, despite his admiration for Lee as a leader and great general. His decision was not easy, but it reflected a choice Lee made—to fight on the wrong side of America’s Civil War—as well as what his visage symbolizes to millions of Americans.

Leadership involves “a complex reality of intersecting factors,” McChrystal said, adding that “there is no checklist for a great leader.” It depends on the followers and on context, similar to how credit for great orchestral music is given to the conductor, not the orchestra. Leaders, McChrystal said, should be “humble and empathetic enough to put themselves in the position of their followers. The best leaders do this almost instinctually.”

To make sense of how leaders vary, he described a typology of different kinds: founders, geniuses, zealots, powerbrokers, heroes, and reformers. He spoke about how Coco Chanel, the founder of the eponymous fashion and fragrance brand, was a visionary, even if she was a ruthless boss who later mingled with Nazis. He discussed how Martin Luther King, Jr. stayed up until 4am the night before his famous 1963 speech on the National Mall, largely improvising some of the most famous and important words spoken in the twentieth century.

He spoke about his time in Iraq with JSOC, hunting the leader of the Islamic State in Iraq, Abu Musab al-Zarqawi. He was critical of American leadership and doctrine. “When we went into Iraq and Afghanistan, we built a force that was checklist-oriented, and we paid a price for it,” he said. “It doesn’t matter if you follow doctrine. It matters if you win.”

That goes in spades for future wars, he said, stressing the needs for future officers to be able to be improvise, utilize information technology, and possess a decentralized willingness to act on their feet.  “Future wars will be like jazz, not a set orchestra,” he said, circling back to his previous metaphor.

Cadets appeared to appreciate the general’s candor. “I liked his perspective,” said Jessica Maddox, Class of 2019 Company E2. “He was very candid and vulnerable. The leaders he chose offered unique insights and really opened cadets’ eyes.”

The Wedemeyer Strategic Lecture Series honors the intellectual and strategic legacy of Gen. Albert Wedemeyer (USMA ’19), one of America’s most significant and under-recognized military strategists, by bringing to West Point subject matter experts on the role of the individual leader in complex operations.