A Message to Cadets: Be the Best “That” That You Can Be, On Branch Night and Every Night 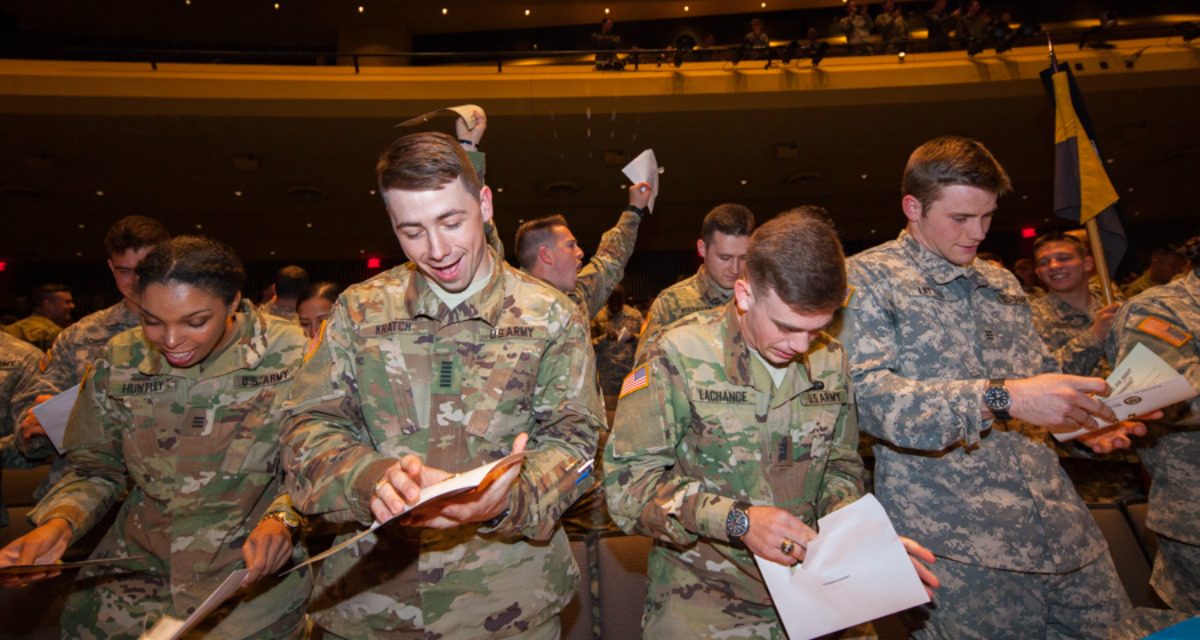 Tonight is “Branch Night” at the US Military Academy at West Point. In my opinion, this event is second only to graduation in terms of the level of excitement and significance in a West Point cadet’s career. As the name implies, Branch Night is the evening in which the graduating class of cadets find out which branch of the Army (intelligence, armor, aviation, etc.) they will serve in after commissioning. Even though my own branching was over twenty years ago and was at an entirely different school, this event is something I’ve looked forward to and attended every year since I began teaching here in 2013. It never disappoints. For this article, I thought I might explain how Branch Night works at the Academy, and to urge everyone who will soon commission through West Point, the Reserve Officer Training Corps (ROTC), or Officer Candidate School (OCS) to be the best “that” that they can be.

On Branch Night, the entire 1,000+ members of the firstie (senior) class file into the cavernous amphitheater in Eisenhower Hall. From the very start, the atmosphere is electric with excitement. After words of inspiration from visiting dignitaries and West Point’s senior leaders, the firsties receive sealed envelopes labeled with their names. Hidden from view inside the envelope is a brass pin indicating the branch in which each cadet will serve at the beginning of his or her career. Anticipation builds as cadets hold the envelope in their hands and wait for the order to open them. At the designated moment, there is a brief hush followed by the sound of envelopes being torn asunder, and then the auditorium explodes in a cacophony of cheers, high-fives, and hugs. Shortly thereafter, the newly branched West Point cadets place their new branch insignia on their uniforms and then adjourn to designated branch-specific areas within Eisenhower Hall to celebrate with their classmates, instructors, chain of command, visiting dignitaries, and representatives from the Army’s basic branches.

Branch Night is one of the many things that West Point does exceptionally well. To share such a happy moment with one’s peers in such a manner has to be an emotional highlight of the pre-commissioning experience for West Point cadets. This is very different from my “branch night” experience twenty-plus years ago in the ROTC program. I remember simply going to class one day and having my instructor read off the list of names and branch assignments. I’m also told it differs significantly from the “NFL draft” style of branching at OCS.

But even at West Point the branching process is not all “high-fives and hugs” for everyone. While satisfaction rates (the percentage of cadets who receive one of their top three choices) tend to be very high, there are invariably those who end up disappointed. That’s only natural. But sometimes there are cadets who, upon seeing their branch, are so overwhelmed with disappointment that they burst into tears or seethe with anger. This doesn’t happen often, but it is a concern to me when it does.

While I understand some level of disappointment in not getting something that one worked hard for and earnestly hoped to achieve, I found that kind of overly emotional reaction to one’s new branch to be unprofessional; unseemly even. I can’t help but wonder how that lieutenant-to-be’s platoon would feel if they knew that their officer’s first reaction to their branch was grief or rage. We all signed up to serve in accordance with the “needs of the Army.” All of the branches of the Army are important, and they all need quality leaders. Moreover, the fact is that most officers-to-be have very little sense of what it’s like to be an officer of any branch, much less a specific branch. I know many officers who received their branch of choice only to find out it wasn’t what they expected. I also know many officers who did not get what they wanted and found out it was a blessing. They discovered, as I have, that some of the best things that ever happen in life happen because someone didn’t get something they thought they really wanted at the exact time they thought they should have it.

At the dawn of a new officer’s career, very little is permanent unless they make it that way. New officers and officers-to-be should own their new branch. They should give it a fair chance. If they subsequently find out it’s not for them, they can request a branch transfer or, if they stay in long enough, a functional area more in line with their desires. But in the meantime, they should strive to “bloom where they are planted” within the Army’s branching field.

Having explained the Branch Night process and offered some personal perspective, I’d like to close by addressing all of the West Point and ROTC cadets and OCS candidates who have received, or soon will receive, their branch assignments.

Cadets and candidates, when you receive your branch, it is a tangible indicator of the fact that you are about to join the Profession of Arms and assume the unlimited liability of a commissioned officer. This requires you to be a member of a profession, a leader of character, a warfighter, and a servant of the nation. These are not traits confined to one branch. They are not confined to one commissioning source. These are universal requirements of our Army profession.

When you “open that envelope,” whether it’s literal or figurative, and see what’s inside, that is your new branch. YOUR new branch. Be a professional and own it. Whatever that branch is, resolve yourself to be the best “that” that you can be. Be the best finance officer, the best MP, the best tanker. Be the best infantry officer, loggie, or CHEMO the Army has ever seen. Whatever it is, that branch is now an essential part of you. You are an essential part of the Army. Every branch in our Army is important. Every branch deserves great officer leadership. You must provide that leadership. Your nation expects it, and your soldiers deserve it.

To you, the cadets of ROTC, OCS, and West Point, I send my congratulations and best wishes as you receive your branch assignments. The rest of your career awaits. We can’t wait to see where it takes you.

Lt. Col. Charles Faint is the deputy director of the Modern War Institute and is proud to have received his commission through the ROTC program at Mercer University. He previously served as the course director for MX400, the superintendent’s capstone course on officership.