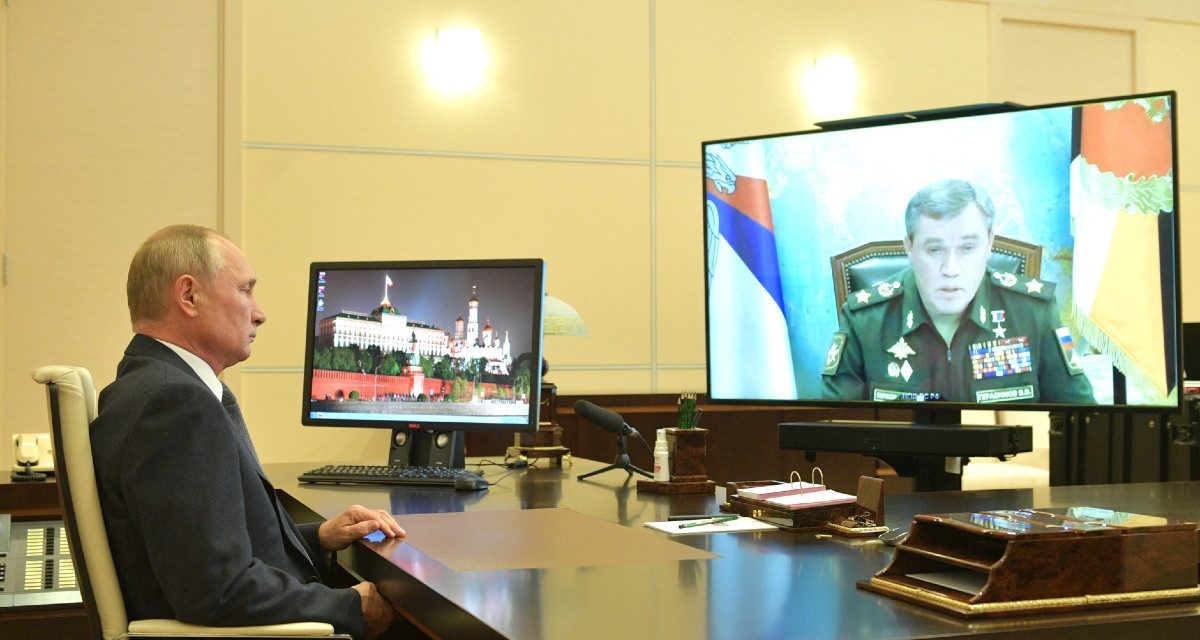 As Russian forces in Ukraine approach two weeks in the country since their invasion, it has become increasingly clear that Russian efforts to achieve a quick military victory in Ukraine and replace the regime in Kyiv with a more pliable one have failed. Vladimir Putin premised the initial plan of operations seemingly on the idea that military victory would come quickly, toppling the government of Volodymyr Zelenskyy. In its place, Russia would establish a pro-Russian leader that would sign some form of a political agreement with Russia regarding Ukraine’s “demilitarization and denazification,” allowing the Russian military to largely withdraw from the country. Over the first weeks of the war, it has become clear that this naïve plan, based on overly optimistic assumptions about how the Ukrainian public would support toppling the government in Kyiv, has failed.

With the initial aspiration of being welcomed as liberators unfulfilled, Russian forces will now likely need to engage in occupation and pacification to achieve their goals. Putin has continually mentioned he was not interested in occupying the country, yet it will be the only means to achieve his goals and ensure that any lasting resistance will not oust an installed leader, as is likely to happen without continual Russian military support. His desire to avoid occupation appears smart given the historical track record of military occupation. But Putin has appeared to have fallen into a common regime change folly where, in deciding to engage in regime change, he did not consider that a military occupation would most likely be required to prop up the newly imposed regime. Like many other would-be regime changers in history, he has underestimated the costs his regime change plan will require.

This error is common throughout history. Sadly, the mistaken belief in the low cost of this option makes aggressors more likely to launch a war in the first place, only realizing after they invade that they created a quagmire. Now, with an occupation seemingly required to achieve any major political success, it is worth taking time to more fully consider why Putin and the Russian military overlooked occupation in prewar planning and—based on how militaries traditionally engage in occupation—what it will likely look like in this case if Ukraine’s current government is eventually removed.

Putin has premised his political goals of the war seemingly on the idea that regime change could produce a more pro-Russian government in Kyiv at a relatively cheap price. Because of this, much like most would-be regime changers throughout history, Putin and the Russian military appear to have not invested heavily in postwar planning for what an occupation would look like. And why would they? If the goal and premise of the invasion was to replace the leadership quickly, impose a new government, and leave, then there did not need to be much investment in occupation planning. Given how little planning the Russian military appears to have engaged in for even the first stage of military operations, it seems even less planning attention was given to the postinvasion phase of operations that Russia would require to translate military success into political success.

This myopia has regularly occurred throughout history, and the inability to plan for the occupation period has led to many poor intervention decisions. Aaron Rapport has shown that those who most desire regime change often overlook what such an operation will actually require in the long run. He finds that leaders who seek regime change focus overly on the desirability of that outcome and not on all the steps it will take to get there. Moreover, those who are most wary of engaging in regime change take the most time in planning for what occupation to install a regime will entail, making them less likely to decide to try in in the first place. In this case, Putin’s desire to topple the regime in Kyiv seemingly contributed to his overlooking the costs required to achieve that goal.

Similarly, my research on all cases of occupation since 1898 shows that only roughly 15 percent of the militaries who eventually did set up military occupation actually planned for it ahead of time. Almost all thought they could install a new leader and withdraw, not necessitating investing in civil affairs or occupation forces that they ended up needing for the occupation. In most cases, the leader conceived a regime change mission as a short operation that the military could carry out quickly, which would not require a lengthy presence. Instead, occupiers in most case are like Gilligan and the Skipper: planning for a three-hour tour turns into a years-long venture. As Russia is learning, however, the failure to plan for what occupation will require will only make the occupation phase even more costly. Russia failed to learn the lesson that the only way to ensure you will not be occupying another country is to not try to topple its government in the first place.

What Would Occupation Entail Today?

Given the likelihood of engaging in occupation, what would a Russian occupation now look like in Ukraine? After ousting a government or taking control of a city, historically occupiers have largely two types of strategies they can use to administer the territory: indirect or direct rule. Indirect rule strategies use existing bureaucrats and leaders to administer the territory. This was the strategy used by Nazi Germany in Vichy France. Direct rule strategies require occupying forces to set up direct military administration where military units govern cities and territory themselves rather than local government officials. This was the strategy used by Nazi Germany in northern France.

Traditionally, occupiers prefer to try to maintain current bureaucrats in power, an indirect rule strategy, to allow resources to be focused on advancing militarily. When the war is over and victory is declared, this strategy requires fewer permanently stationed troops to remain behind. The goal is to find local actors willing to work with occupiers to keep the towns functioning. However, more often than not, occupiers arrive in towns and find that local bureaucrats are not as willing to work with them or not as able to maintain law and order as hoped. This, then, requires direct military rule—however reluctant the occupier is to administer it. For instance, in World War II, the Allies initially planned to use an indirect rule strategy in occupying Sicily and southern Italy during the war. However, after the invasion, Allied forces found that there were insufficient local administrators to work with to maintain order, so they had to instead invest in direct rule to maintain stability as best they could.

It seems from initial reporting that Putin assumed a Vichy-like indirect rule strategy would be possible in Kyiv. However, this type of indirect rule is predicated on enough existing bureaucrats and local administrators supporting the newly imposed government, and in this case, Russia’s goals. However, as seen in videos from places occupied by Russian forces, the exact opposite has happened as locals have only turned further against Russia. Thus, the viability of an indirect rule strategy for Russia is becoming more and more unlikely, further increasing the costs and requirements of Putin’s political goals for this war. Rather than citizens passively accepting the occupiers and being willing to work with them to maintain the administration of the cities, Ukrainians in Kherson and elsewhere are actively resisting Russian forces. Even in towns ostensibly more likely to be pro-Russian—like Novopskov in the eastern Luhansk region—public demonstrations against the occupation are requiring Russia to devote more resources to police the town. Now, it is almost certain Russian military will have to engage in direct rule through military administration.

Problematically for Russia, direct rule will require more resources for administering and holding each town, which is why Putin wanted to avoid it if possible. It will also create two occupation dilemmas. First, given Russian forces’ logistics problems, direct administration will force difficult decisions about whether to use resources to administer these towns and feed their populations to keep resistance as low as possible, or to instead give supplies to the mal-supplied troops headed for the front lines.

The second dilemma relates to the number of forces required for successful direct rule occupations. Direct rule often fosters greater resistance against it than indirect rule, and thus requires higher troop levels to pacify the area. With only 150,000 troops mobilized prior to the war, this would not be enough for a lengthy direct rule military occupation in Ukraine facing sustained popular resistance. A dilemma would then emerge where more units—including, perhaps, the Russian National Guard, an independent force that reports directly to Putin—must be sent to Ukraine. This would reduce the number of forces available at home to deal with any potential domestic unrest. These trade-offs would directly lessen the ability to achieve political goals in the war in Ukraine and make an occupation appear even more costly.

What the Russian military is finding out is similar to what most occupiers throughout history have learned. Very few occupations began with the military wanting to occupy; only once they arrived and realized how dire the situation was did the infeasibility of the mission become clear. There is no clear path to avoid occupation and achieve political success for Russia in this war. Instead, the most likely scenario seems to be that if Russia achieves a military victory, the postwar costs of occupation will continue to rise in a way that Moscow is unprepared for and did not price into its calculations. As is common for most cases of regime change throughout history, in opting for regime change to try and achieve quick political success, Russia has instead plunged itself into a situation requiring a costly occupation to even hope to have a chance at any political success. Instead, it is most likely to find that no political victory exists at the end of occupation.

Benjamin Denison is a nonresident fellow with Defense Priorities. Previously he was the assistant director of the Notre Dame International Security Center and a postdoctoral fellow at Dartmouth College and The Fletcher School of Law and Diplomacy at Tufts University. His research focuses on regime change, military occupation, and international security. He earned his PhD in political science from the University of Notre Dame.