Money and Influence: The Economic Aspects of Great Power Competition 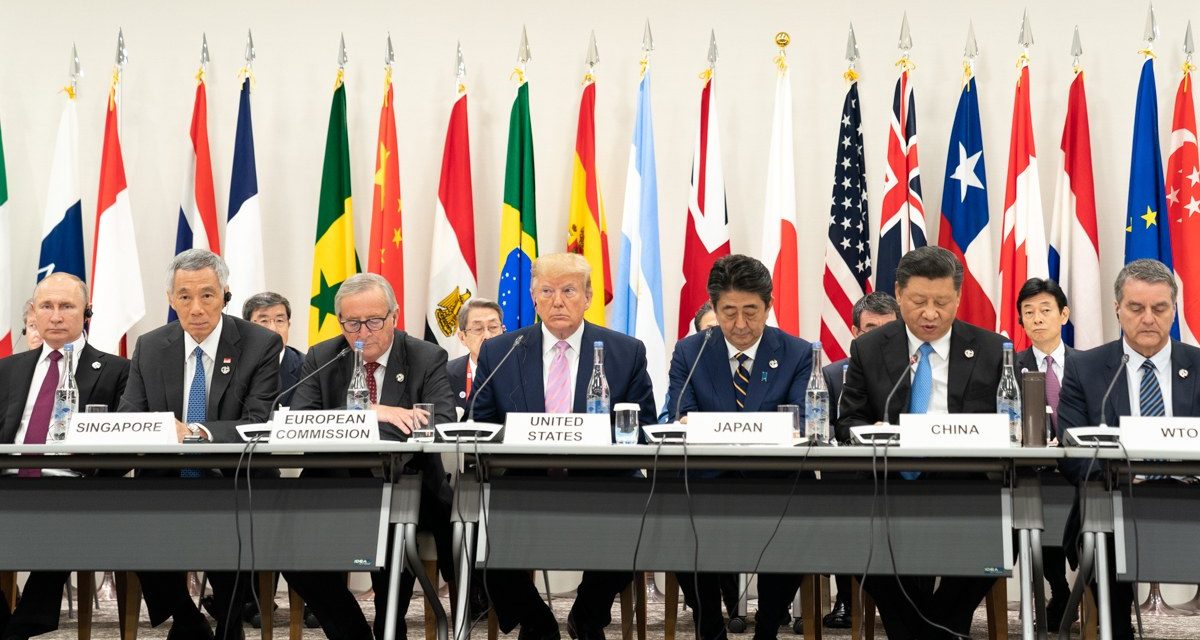 Last month, all ten members of the Association of Southeast Asian Nations (ASEAN), along with China, Japan, South Korea, Australia, and New Zealand, signed the Regional Comprehensive Economic Partnership (RCEP) agreement. This free trade agreement applies to more than two billion people—by that metric making it the largest free trade agreement that has ever been formed. While the substance of the agreement may not be as monumental as its scale, it stands as yet another instance of traditional American regional allies and partners, as well as adversaries, forging ahead to craft alternative arrangements in the absence of US international engagement. In this sense, it is emblematic of the changed international environment in which the United States increasingly finds itself: one no longer defined by unrivaled American military and economic power and influence. The policymaking community increasingly describes this new challenge as one of “great power competition,” with China as the most significant strategic challenge. At the same time, there are concerns about the militarization of American foreign policy and the potential for inadvertent escalation. This has prompted some to call, rightly so, for the reinvigoration of American diplomacy—which would include strengthening the State Department, renewing relationships with allies and partners, and engaging with the global community through international institutions and organizations. However, while a focus on diplomacy is important, the United States should not ignore the economic challenges of the current strategic context.

In addition to unrivaled military power, American leadership in international economic and financial institutions and organizations has been the defining feature of the post–World War II and, especially, the post–Cold War international order. However, the fundamentals of American strategic economic power are eroding in relative terms. There are three important trends that illustrate this.

First, at the most basic level, the economic foundation that has enabled American prosperity and innovation is weakening. The most obvious indicator of this trend is the relative size of the Chinese versus American economies that, depending on how its measured (purchasing power parity or gross domestic product), puts the former or the latter on top. But, the issue extends beyond relative economic size and encompasses challenges such as shrinking proportion of US research and development funding coming from the federal government; large-scale intellectual property theft, especially through cyber means; low levels of trust between the private sector and government and impediments to public-private collaboration, especially in the technology sector; and gaps in US domestic education outcomes compared to the rest of the world.

Second, the means of economic statecraft on which the United States has relied for decades have led to unintended negative effects. Specifically, America may have overused its position of power within international economic and financial institutions. In effect, the United States has weaponized the interdependence on which global economic and finance networks rely. Economic sanctions and other tools of economic coercion have had a mixed record in achieving US objectives. However, of greater concern is the incentives their use is creating for adversaries and competitors currently enmeshed in these networks to move to decouple from the US- and Western-dominated global financial system, such as by developing alternative financial systems to increase their own resilience. An example of this is China’s and Russia’s efforts to create alternatives to the SWIFT financial messaging system. In fact, Russian government officials have explicitly described these efforts as a means of shielding Russia from the consequences of US sanctions. Additionally, this summer Russian President Vladimir Putin signed a law that gave legal status to cryptocurrency, allowing Russian banks to exchange cryptocurrency provided they register with the Bank of Russia (but banned the use of cryptocurrency for payments). Similarly, the sanctions regime imposed on North Korea is likely driving Pyongyang’s massive cyber-enabled financial crimes, such as the 2016 theft of $81 million from the Bank of Bangladesh.

Third, this is taking place alongside a decline in America’s international economic engagement and increased efforts by other states to build alternative institutions and agreements, some of which serve as a counter to US and Western goods provision. For instance, in response to the coronavirus pandemic, the Asian Infrastructure Investment Bank developed a program to provide loans to states. Even traditional American allies and partners have formed their own agreements without the United States. For example, in 2019 the free trade agreement between the European Union and Japan, the EU-Japan Partnership Agreement, came into effect, removing tariffs and trade barriers between those states. And, after the United States withdrew from the Trans-Pacific Partnership (TPP) in 2017, the following year eleven states signed the Comprehensive and Progressive Agreement for Trans-Pacific Partnership—a new version of the TPP—absent the United States. Perhaps more importantly than any of the prior examples, the United States has overlooked the strategic significance of leadership positions in international standards-setting bodies, while China has publicly taken the initiative, such as through China Standards 2035, in establishing global standards in emerging technology. Especially in this area, a state’s ability to help set international standards for critical sectors—such as information and communications technology or artificial intelligence—will have lasting effects on its economic and strategic influence.

While the current efficacy of these alternative financial systems and economic organizations established by US rivals may be limited, the more the United States continues to rely on its economic power for coercive purposes, the more other states will hedge their bets and explore other models. This means that the Departments of Treasury and Commerce, which have played a significant role in US sanctions and tariff policies, will be essential elements of any new US economic strategy but also should be redirected to focus more on international standards, norms development, and trade agreements. Moreover, particularly in light of the economic damage wrought by the coronavirus pandemic, there will be significant political pressure for America to focus on reinvigorating the domestic economy. While this should certainly be a priority, policymakers should recognize that doing so will require international engagement. At the same time, this should come with a recognition that the United States is no longer in a position to unilaterally set the global agenda for free trade, standards, norms, and the provision of economic goods. Therefore, the economic dimensions of this new, multipolar international environment mean America must find a way to work with partners to cultivate its own economic interests and global influence.

Erica D. Borghard is a Senior Fellow with the New American Engagement Initiative in the Scowcroft Center for Strategy and Security at the Atlantic Council. She is also a Senior Director on the US Cyberspace Solarium Commission, and was previously an Assistant Professor at the Army Cyber Institute at West Point.