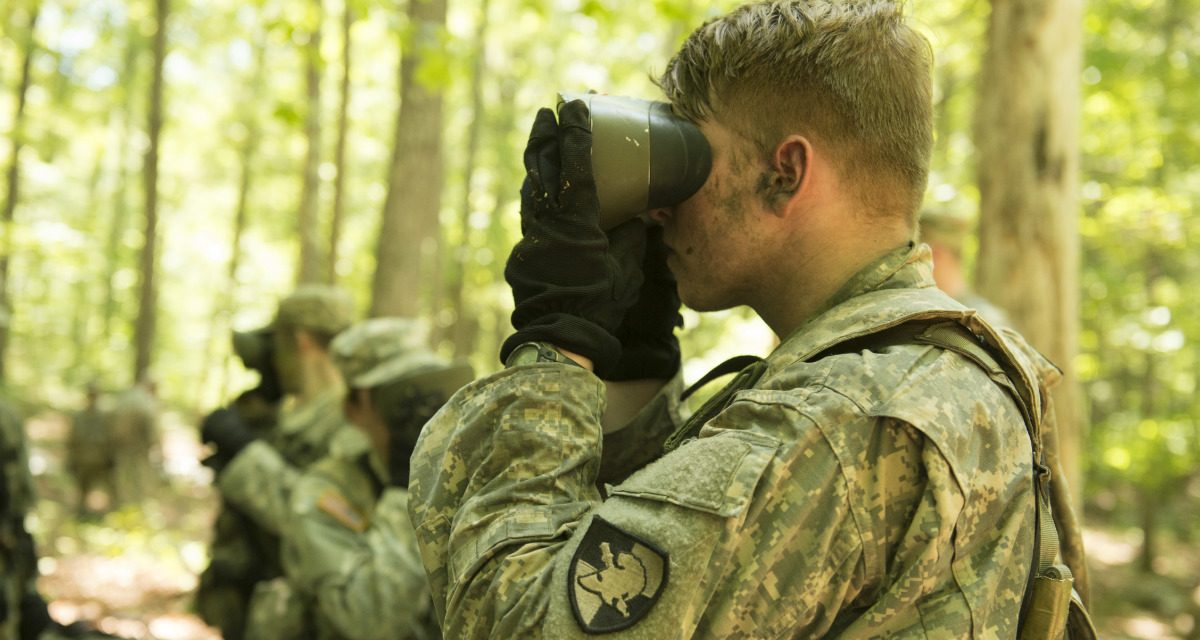 A patrol links up with a small special forces team and conducts a tactical movement to a position near a target village. They halt, and use virtual reality goggles loaded with photos taken clandestinely throughout the village by a local source—the patrol leader and his subordinate leaders are able to virtually walk through the entire village. Before initiating the raid that the patrol has been ordered to execute against a target building holding a group of enemy fighters, a soldier hacks into an security camera network in the village, giving the patrol control of each camera and obtaining the direct imagery feed. As the soldiers move into position, a drone appears ahead of them. The patrol leader calls up a soldier armed with a “cyber capability rifle,” who—immediately before the support element begins firing—takes aim and uses the weapon to “shoot” code over Wi-Fi at the drone, essentially tricking it into thinking the rifle is an administrator and transmitting an order to stop functioning.

With enemy situational awareness eroded from the loss of its drone, the assault element begins its actions on the objective and the raid continues.

This isn’t typical Army training. But it was what around 1,000 West Point cadets have experienced this summer on a Department of Military Instruction training exercise run by the Modern War Institute and the Army Cyber Institute. How can technology be used to get eyes on an objective when a traditional leader’s recon is insufficient, impractical, or impossible? How should tactical-level leaders work with a range of enablers—from special operations forces to CEMA (Cyber Electromagnetic Activities) teams? What tools are necessary to overcome challenges posed by off-the-shelf consumer technology on the battlefield?  What does Multi-Domain Battle look like at the tactical level—in this case, land, air, and cyber? These are the questions that animated the design of this particular training. The broad contours of the raid—a “surprise [attack] against a position or installation for a specific purpose other than seizing and holding the terrain,” in Army doctrinal parlance—are still there. They’re just augmented with features that are increasingly shaping the modern battlefield.

MWI also worked with West Point’s Behavioral Sciences & Leadership Department to collect data and observations from the training exercise for a research project on whether the use of virtual reality could improve performance during tactical operations. The research is aimed at better understanding soldiers’ intrinsic ability and willingness to engage effectively with new technologies, and informing the ways the Army integrates these technologies into future training.