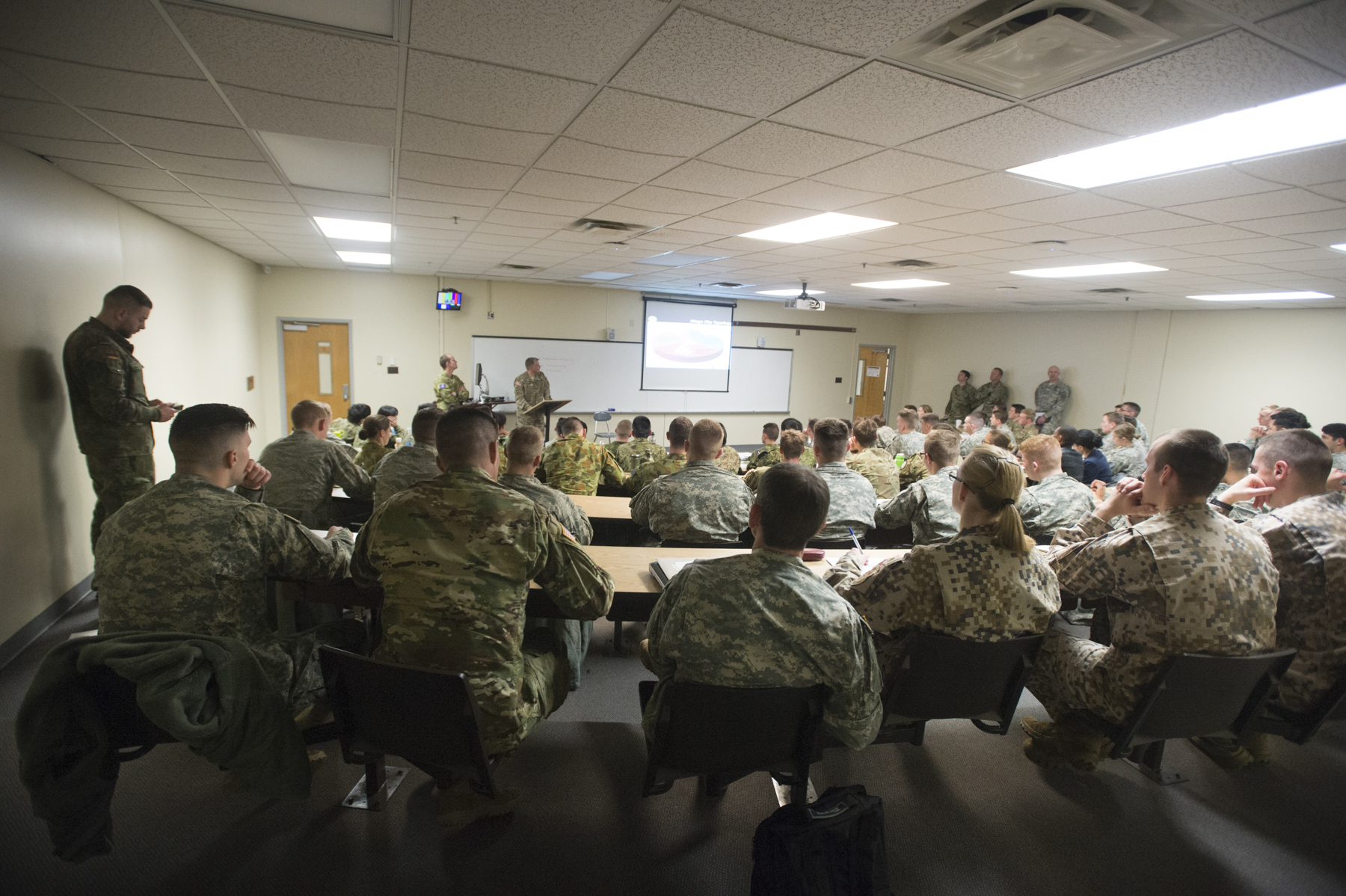 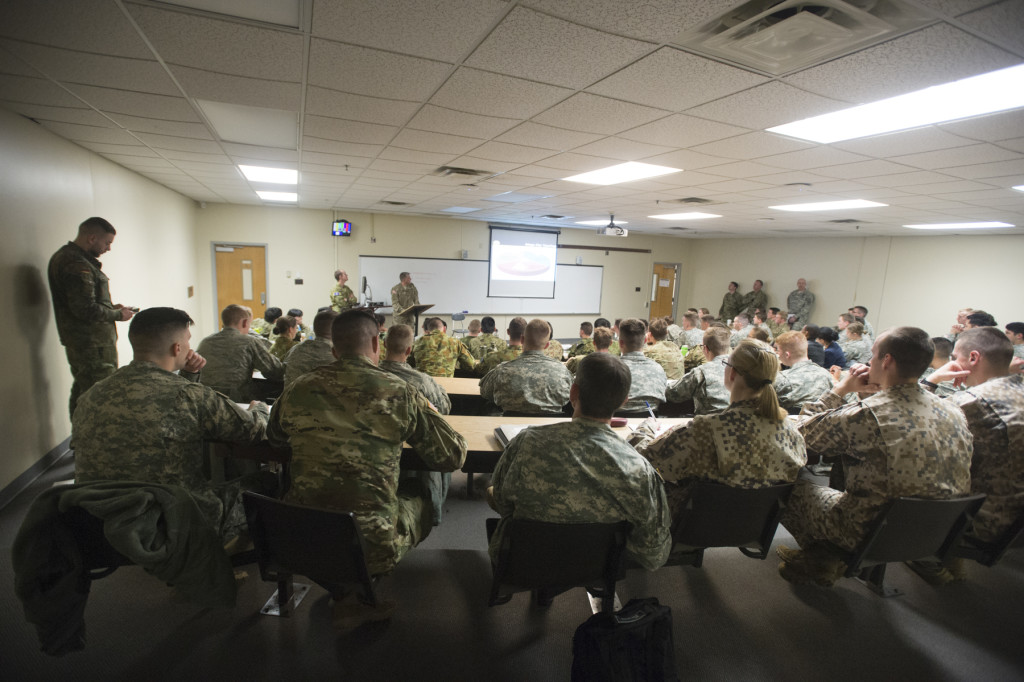 In addition to this week’s Sandhurst Competition at West Point, on Monday, April 4, the Department of Military Instruction (DMI) held its inaugural Sandhurst Conference. The break from four decades of tradition was motivated by the demand to introduce an intellectual component to Sandhurst Week.

Organized by the newly established Modern War Institute (MWI) and made possible by the generous support of the United States Military Academy (USMA) Class of 1999, the Sandhurst Conference brought together several hundred cadets and officers from USMA, Reserve Officers’ Training Corps (ROTC) programs, each of the other U.S. Service Academies, and International teams to discuss the critically important question of how to prepare our next generation of leaders to win in a complex world. The conference reinforces the Superintendent’s aim of ensuring DMI and USMA remains the world’s preeminent military program by challenging our future military leaders beyond tactical and technical expertise. Additionally, this conference leverages the uniquely diverse and international audience of Sandhurst teams to enhance cadets’ critical thinking and complex problem solving skills. 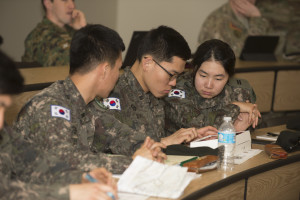 The premise of this year’s conference, “Preparing our Future Leaders for Modern War,” is that technical and tactical competence alone is no longer sufficient for junior officers to meet the challenges of 21st century warfare. The character of war is changing and the growing complexity and uncertainty of the modern battlefield will be defined by technology advancement, accelerating communication, significant demographic and resource shifts, the democratization of violence, and social upheaval. This environment will require leaders with technical and tactical proficiency, as well as a strong intellectual foundation in the interdisciplinary study of conflict.

To develop that intellectual foundation, the conference featured a series of panels, faculty discussions, and speakers aimed at helping our future leaders better understand specific challenges in the future operating environment as well as sessions focused on the importance of military innovation and creative problem solving.

Brigadier General Diana M. Holland, Commandant of the United States Corps of Cadets, kicked off the conference with opening remarks. She emphasized the need for cadets to intellectual prepare for their roles as future leaders in a force that has embraced “Win in a Complex World” as its operating concept. While only six syllables, that mandate demands more from our junior leaders than perhaps at any other time in our history.

Colonel Liam Collins provided a plenary speech on the future operating environment, drawing on anecdotes from his deployments in Haiti, Iraq, and Afghanistan. He also introduced the winners of MWI’s second annual Essay Writing Contest, in which USMA cadets and faculty were asked to write an opinion piece on which innovation in their lifetimes would most affect the modern battlefield. 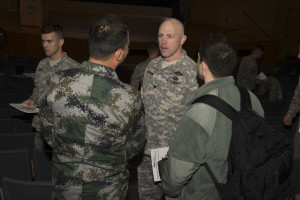 The morning sessions of the Sandhurst Conference consisted of a series of discussions on the difficulty of fighting in a densely populated urban environment, the challenge military academies have fostering innovative and creative thinkers, and the importance of crafting information operations. Afternoon panels focused more on modern warfare at the strategic level, and included a discussion on the security challenge posed by Iran with Dr. Gary Sick from Columbia University, as well as a panel on cyber operations with faculty from West Point’s Army Cyber Institute. The afternoon also featured a number of breakout discussions for faculty to share pedagogical best practices. Faculty discussed the integration of digital technology beyond PowerPoint, how to teach military science outside of the classroom (e.g. implement staff rides effectively), and how to encourage critical as well as creative thinking thru the use of interdisciplinary and multi-methods coursework.

The session on military operations in densely populated urban environments generated a good amount of discussion among the Cadets. The session challenged them with the assertion that current military doctrine was inadequate for the scale of the increasing number of large cities around the world that would most likely be points of strategic importance and tactical operations. Major Mike Jackson from the MWI and Captain James Roberts from the Royal Military College, Duntroon (Australia) partnered to guide the discussion through the typology of cities around the world, the characteristics of those cities, and the implications for military operations. The Cadets contributed enthusiastically and benefited from the views of a U.S. Army infantry officer and an Australian logistics officer with recent combat experience in urban environments.

“I thought it was really enlightening and eye-opening for our students to hear viewpoints not only from American cadets but from the cadets of our allies, considering the discussions we heard on the recent attacks in Brussels or on Russian military action,” said Captain Stuart Warders, an assistant professor of military science at Penn State University. “The topics were diverse, and the discussions were so varied that it gave our cadets a unique and new perspective that they do not get here in the States.”

For the final panel of the conference, cadets and faculty gathered in Robinson Auditorium to hear an USMA cadet-led debate moderated by Major Adam Scher, an instructor in the Department of Social Sciences who also advises the West Point debate club. The cadets disputed a resolution on the use of conventional US and ally troops to combat ISIS, and the audience voted before and after the debate to determine the winner.

The Sandhurst Competition started in 1975 as an internal Cadet competition, yet has steadily grown to bring teams from across the country and across the world to test their physical prowess and military proficiency in a diverse multinational and joint service competition. This year the event includes teams from the four other U.S. Service Academies (Navy, Air Force, Coast Guard, and Merchant Marine), eight ROTC teams, and fourteen teams from thirteen nations (the actual Sandhurst Academy in England gets two teams).

As a complement to the competition, the Sandhurst Conference highlights the mission of MWI, which is to provide intellectual tools on modern conflicts to educate present and future leaders on military problems and the necessary problem-solving skills to win in a complex world. Moreover, it served as a demonstration of how that mission can directly contribute to the professional development of cadets from across the country and across the world.

More photos of the 2016 MWI Sandhurst Conference can be found on flickr.