Up is Down: An MWI Panel on Russia’s Use of Information Warfare in Ukraine 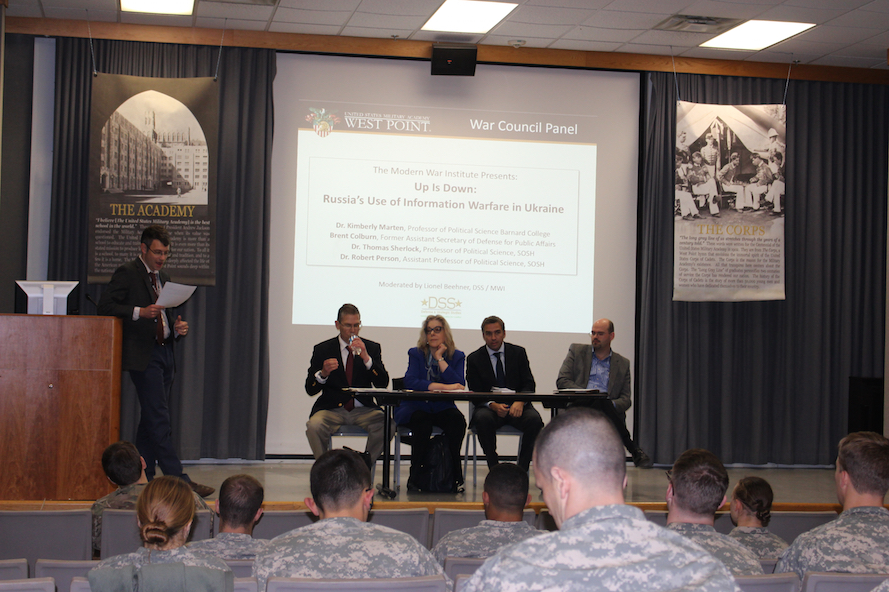 The Modern War Institute held a panel on Friday, November 13, on the use of propaganda and information warfare by Russia in Ukraine. Kimberly Marten of Barnard College, Brent Colburn, former assistant secretary of defense for public affairs, and Robert Person and Thomas Sherlock of West Point’s Social Sciences department all participated in the panel, attended by about forty faculty, staff, and cadets. Marten described the role of Russia-backed militias on the ground in eastern Ukraine and also discussed Kremlin policy toward the region. She said the purpose of its information war was not to persuade or inform average Russians, but rather to confuse. Colburn discussed Pentagon policy in terms of how to respond to such subversive types of information warfare. He said there was no need to respond tit-for-tat against every piece of misinformation put out by, say, Russia Today, the Kremlin-sponsored news channel. Sherlock recently surveyed Russians and found that popular attitudes were less nationalistic and anti-Western than we might expect and suggested that the Kremlin’s information warfare may not be working. Finally, Person discussed the role of information war, as it relates to hybrid warfare, the important role played by ethnic Russians living in the Baltics, as well as NATO’s response to Russian aggression and finds that the West is more united on Russian aggression than it was previously.