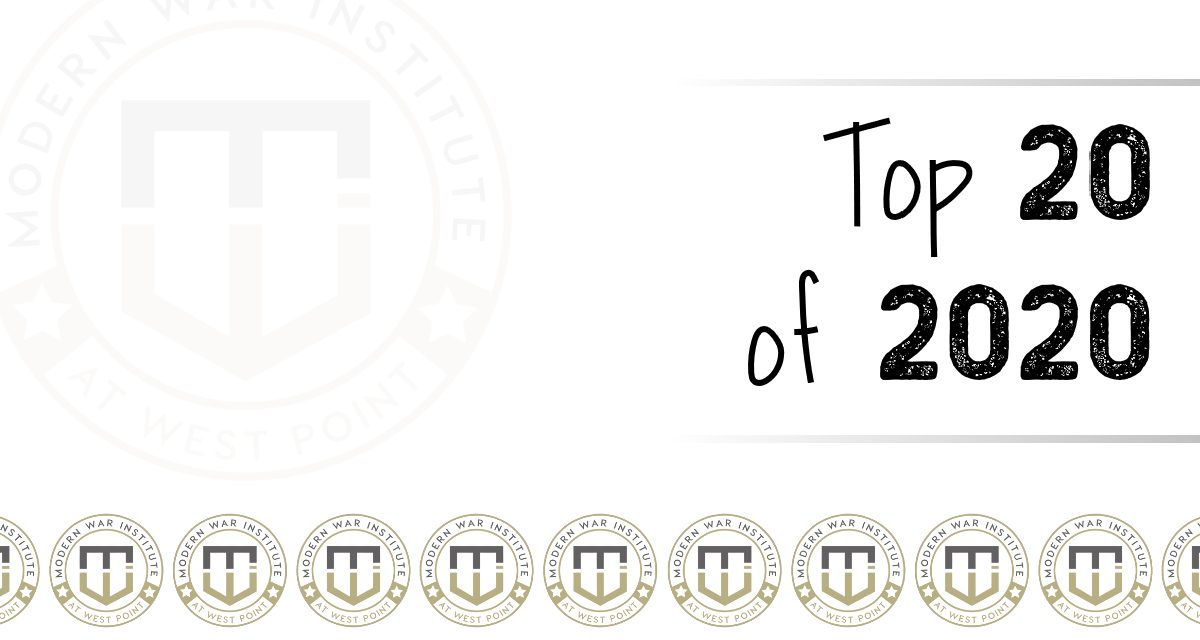 A few years ago, at the end of MWI’s first full year of regularly publishing commentary and analysis articles, we released a list of “the top sixteen of 2016“—the most read articles of the year. We’ve continued to do so each year, and so to carry on this annual tradition, below is the list of the top twenty articles MWI published in 2020.

There’s a notable degree of consistency with earlier years’ lists. Articles focusing on professional development made the list, as they have previously. For the fifth year in a row, commentary about physical fitness has reached a wide audience and appears on this list. And urban warfare features once again as it remains a key area of focus for MWI.

But this year’s list also features articles that were exceptionally timely, reflecting the year and the context in which they were written. In 2020, the Army launched a new way of selecting battalion commanders, and two articles about that program appear on the list. Broader issues not exclusive to the military also shaped the topics that authors wrote about and readers sought out. Against the backdrop of a global pandemic, one article examines problems in the US military that were revealed by COVID-19 and the response to it. And as society grappled with issues related to race, the military was not excepted from these public conversations, nor should it have been; two articles on the list focus on race and the Army.

If you haven’t read any of these articles, now is a great chance to catch up—and if you have, many of them are well worth reading again. It’s a privilege for the team at MWI to be able to work with each and every individual who puts pen to paper, submits their ideas to our audience, and helps MWI engage in important discussions related to modern war. We look forward to working with all of our contributors, including new ones, to continue these discussions in 2021.

1. Taking “De Oppresso Liber” to the Streets: Why the US Army’s Special Forces Qualification Course Needs to Become More Urban, by Sandor Fabian

2. Duty and Compensation in the Reserve Component: One Weekend a Month, Two Weeks a Year, and a Bunch of Unpaid Work, Alan Peña

3. Briefing a Senior Leader? Put that Bumf Away and Unburden Your Soul, Michael Symanski

4. What Should West Point Do About Its Robert E. Lee Problem?, by Jimmy Byrn and Gabe Royal

6. I Took Part in the Army’s New Battalion Commander Assessment Program: Here’s What I Learned, by Vincent Enriquez

7. The Army Combat Fitness Test is Exactly What the Army Needs—as Long as These Challenges are Addressed, by Jeremiah Rozman and Eugene Irby

9. On Killing Tanks, by Vincent Delaney

10. So You’re Going to Be a Staff Officer: Five Pieces of Advice for Success and Personal Satisfaction, by Brandon Morgan

11. Who Gets a Brown Beret? Rethinking Assignments to the Security Force Assistance Brigades, by Jon Tishman

12. The Army Needs a Better Solution for its Pilot Shortage, by Brennan Randel

14. The City is Not Neutral: Why Urban Warfare is So Hard, by John Spencer

15. First to Adapt: Why the Joint Force Should Be Closely Watching the Sweeping Overhaul of the Marine Corps, by Brian Raike

17. “You Really Think I’m Irrelevant? LOL.” A Letter to Clausewitz Haters from Beyond the Grave, by Steve Leonard

18. No Way to Get to the War: Mobilization Problems and the Army Reserve, by Jules Hurst

19. Swarms of Mass Destruction: The Case for Declaring Armed and Fully Autonomous Drone Swarms as WMD, by Zachary Kallenborn

20. COVID-19 Is Revealing Problems the US Military Has Ignored for Far Too Long, by James Long