Never Bring a Stryker to a Tank Fight 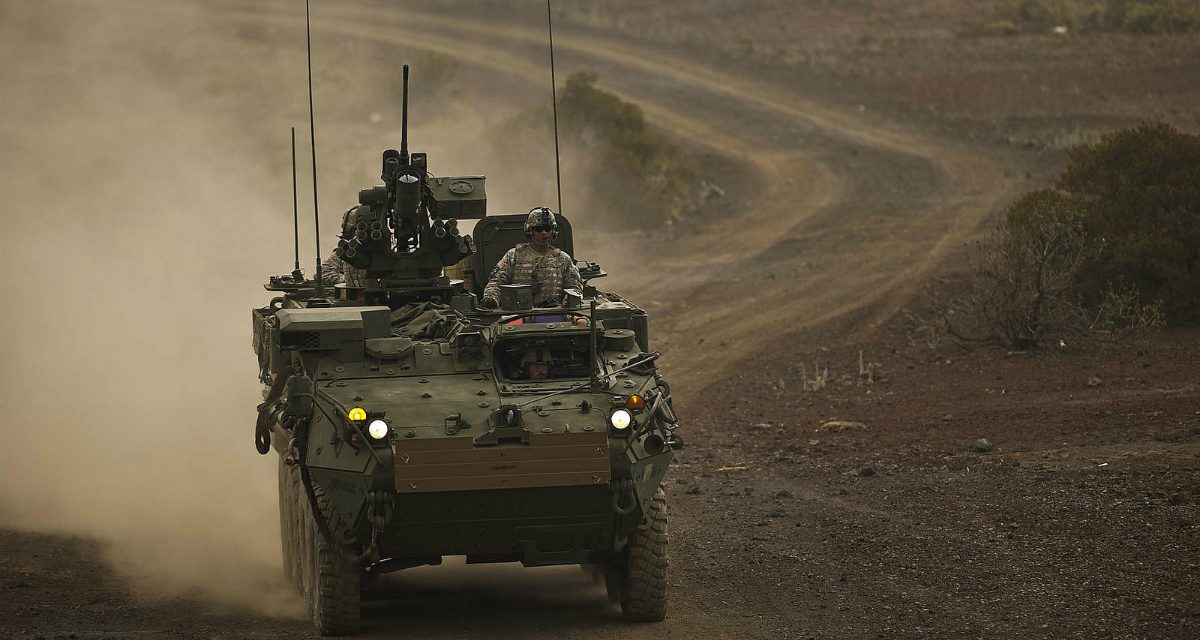 Any armchair Patton will tell you that it’s not a good idea to use a Stryker formation against a tank formation.  But in a recent article for the Modern War Institute, Capt. Andrew Gregory argues that adding a 30-millimeter cannon to the Stryker would make it a more lethal weapon system—an upgrade he says is made necessary by changes in the contemporary operating environment.   While he notes that the up-gunned Stryker still shouldn’t be used to directly engage armored formations, his argument is short of convincing.  The reality is the Stryker was not designed to trade shots at distance with an enemy armored force, and by adding a 30-millimeter cannon it will only create a false sense of security and encourage commanders to do just that.

What is a Stryker?

The Stryker is an eight-wheeled armored vehicle that, along with the black beret, was an initiative brought forth by former Army Chief of Staff Gen. Eric Shinseki.  Initially called the interim armored vehicle it was intended to be a bridge between the combat vehicles of the time and a future combat system that never came to fruition.  The Army made a clear distinction from the M2 Bradley, which is designated an Infantry Fighting Vehicle (IFV) by designating the Stryker’s most common variant as an Infantry Carrier Vehicle (ICV).

The difference between an IFV and an ICV seems subtle at first, but their use in doctrine could not be further apart.  The Bradley was designed to fight through to an objective, only dismounting its small number of infantry once it arrived.  Infantry, however, is not the priority with the Bradley.  This made it a good vehicle to fight alongside M1 Abrams Tanks.  The Stryker on the other hand has a different job entirely.

As Capt. Gregory notes, by doctrine the Stryker was intended to be used as an armored troop transport—a formation centered around the Infantry squad.  A Stryker formation would dismount its infantry one terrain feature away from the objective.  The dismounted infantry would then assault the objective with the vehicles they left behind providing supporting fires from either their MK-19 grenade launchers or .50-caliber machine guns.  These objectives are intended to be ones that light infantry would be traditionally tasked with.  Nowhere in the doctrine does it discuss Strykers matching up with enemy armored forces.  The greatest tragedy for a Stryker formation is a destroyed Stryker with its squad still in the back, which is exactly what would happen when put up against a tank.

Stryker formations became popular during the war in Iraq as commanders began to understand their usefulness in counterinsurgency operations.  Being wheeled, the Stryker could move more quietly than the Bradley and dismount more troops (nine, compared to the six carried by a standard Bradley), overwhelming the objective and surprising those inside.  The demand for Stryker formations began to outstrip supply, causing the Army to transition several armored brigades into Stryker brigades.

Capt. Gregory identifies many arguments against adding a 30-millimeter cannon to a Stryker and attempts to shoot each one of them down. Many of the arguments he uses in support of the more lethal variant—that Strykers are outgunned by their near-peer counterparts, that doctrine wouldn’t have to change very much, and that anti-tank systems have proliferated among both state and non-state actors—unwittingly prove the opposite of what he is trying to convey.

First, Strykers are outgunned by the enemy.  As stated in doctrine, the Stryker is not designed to maneuver against other combat vehicles.  Many have tried during rotations at the National Training Center and were quickly destroyed by the opposing force.  The fact that a Stryker is outgunned by a Russian BTR or a Chinese Type 90/92 matters little if the Stryker is employed correctly and not maneuvered on the battlefield like an Abrams or Bradley.

Second, doctrine wouldn’t need to be changed much.  Capt. Gregory is right.  In fact, if the 30-millimeter cannon were to be added to the Stryker, doctrine shouldn’t be changed at all.  The vehicle should still be used to move light infantry forces close to an objective.  The problem is with the second part of his argument.  Gregory states, “Denying the SBCT [Stryker brigade combat team] formation increased lethality due to an unwillingness to trust our tactical leaders to employ the platform correctly, betrays the trust we place in those leaders to fight and win wars.”

On a fundamental level this is correct: we should trust our tactical leaders to properly employ their weapon systems.  The problem is we already use the Stryker improperly.  During rotation after rotation at the National Training Center, SBCTs are put up against large enemy armored formations.  These formations consistently do poorly in offensive operations against enemy tank formations unless they are augmented with tanks of their own or attack helicopters.

During defensive operations, however, these same Stryker formations do fairly well.  Units that use their engineers to properly dig in their vehicles, and their Javelin teams, are able to hold off armored formations for a short period of time.  But once they get out of these survivability positions and go back on the offensive the tide shifts quickly back to the armor.

The issue is not that Strykers are not sufficiently powerful to slug it out with tanks, but that Stryker unit commanders are encouraged to treat their formations like tank formations at the training centers.  Stryker commanders are told to use their cavalry to fight for information just like an armored brigade would, only to find that without the heavily armored Bradley, in no time at all they no longer have a cavalry squadron.  Instead of being encouraged to use their infantry to their advantage, they are told to move in formation, resulting in Strykers taking on T-80s with .50-caliber machine guns. Not even in a MILES environment will that math work.

Another indicator that trusting leaders to use the Stryker as it was intended even if it has a 30-millimeter cannon is foolhardy is the reason we are talking about adding the gun in the first place.  After Russia moved on Ukraine, NATO allies and other eastern European countries looked to America for help.  The US military found itself in a sticky situation.  It no longer had the large armored formations stationed throughout Europe that it did to deter a Soviet invasion during the Cold War.

That threat was supposed to be long gone, so the Army had slowly shifted armored forces back to the United States.  After the Ukraine crisis began, the United States found it only had an airborne brigade and a Stryker brigade left on the continent to deter the invasion of another eastern European country by a Russian military heavy with armor.   Instead of bringing forward an armored brigade to replace the Stryker brigade to beef up deterrence capabilities, the US military has done exactly what Capt. Gregory asks us to trust leaders not to do: put Strykers on the front line, potentially up against Russia’s top-of-the-line tank formations.

Putting Strykers up against armored formations, even with a 30-millimeter cannon, brings to light the real problem with the Stryker.  It has thin skin.  This is where Capt. Gregory’s argument that anti-tank capabilities have proliferated among both state and non-state actors since the Stryker’s introduction comes into play, but not in the way he intends.  Currently, Stryker armor, hard steel augmented with ceramic panels, is only capable of protecting against direct fire from a 14.5-millimeter machine gun and fragments from indirect fire systems.  This is easily defeated by most of the armored vehicles in the Russian inventory and a far cry from the Bradley Fighting Vehicle, which has a reactive armor package that protects against multiple anti-armor munitions.   You could put an Abrams main gun on a Stryker and it still wouldn’t change the fact that both the vehicle and the infantry squad sitting in the back are vulnerable to anything bigger than a machine gun.

A Better Solution in Europe

Adding a larger weapon system to the Stryker will not improve the vehicle so much as accentuate its vulnerabilities by tempting leaders to break from doctrine and use Stryker formations against heavy armor.  Armored formations will make quick work of the lightly armored Infantry Carrier Vehicles.   A more effective solution would be to pull the Stryker formation from the front line, return it to the United States and replace it with an armored brigade combat team that can be used as a more appropriate deterrent against Russian armor, thus returning the Stryker to its follow and support role.

If you want to fight a tank, bring a tank.

Maj. James King is currently serving as the executive officer for a military intelligence battalion in San Antonio, Texas. While serving over twenty years in the National Guard, Army Reserve, and Active Army, including almost ten years in Stryker brigades, Maj. King has held multiple leadership positions in the military police, infantry, and intelligence fields, as well as deploying three times in support of Operation Iraqi Freedom. He holds a BA in Sociology from the University of Washington, where he earned his commission through the ROTC program and a Master’s Degree in Strategic Intelligence from American Military University. The opinions here are the author’s own and do not reflect the policy of the US Army, Department of Defense, or any government agency.