Never Leave a Fallen Robot? An Unanswered Question About the Future of Manned-Unmanned Teaming 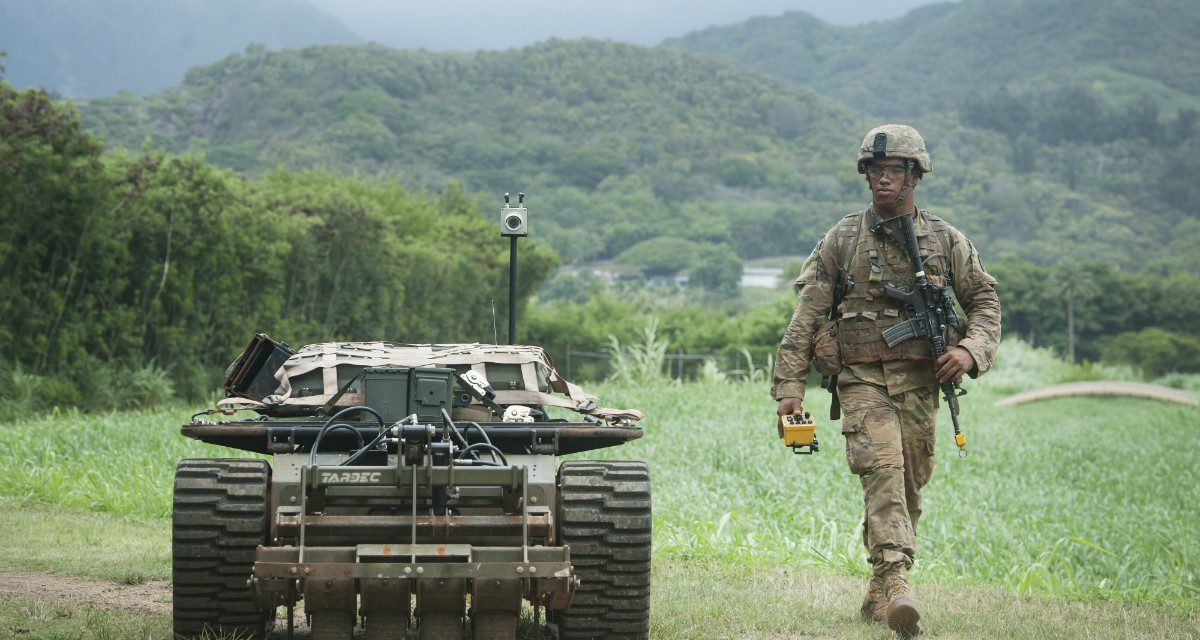 Near dusk, a patrol of Strykers meandered the open, dusty countryside of southern Afghanistan in an area new to American forces. The platoon deployed their Raven TUAS to conduct aerial reconnaissance of an area of dead space along an unmapped dirt road. The Raven was lost shortly after launch when the network link disconnected and the “fly home” feature failed to initiate. As designed, the system continued flying along its last known azimuth. The platoon’s new mission became one of location and recovery, at the expense of their assigned tasks. Once the Raven’s batteries died, the system crashed in an uncharted Soviet minefield. The platoon would confirm this after losing two vehicles in the ensuing 30 hours of recovery.

The paragraph above is a true story. The platform is of little consequence, helpful mostly because the situation is one to which numerous leaders and Raven operators across the force can relate based on experiences in training and combat. This anecdote highlights an important planning factor that has received little attention, one that is critically important as the Army ventures more into the field of manned-unmanned teaming. The issue is not that two multi-million dollar vehicles were sacrificed to recover a single, low-cost platform, nor the larger trend of complete mission shifts for recovery operations at the expense of directed tasks. That is a symptom. The issue is that the Army needs a system or planning framework for determining whether an unmanned platform should be recovered or abandoned in the event it becomes non-mission capable.

Earlier this month, the Maneuver Center of Excellence at Fort Benning, GA demonstrated manned-unmanned teaming (MUM-T) of ground-based combat platforms, including wheeled and tracked vehicle formations. In the air, MUM-T has been validated and employed with AH-64 Apache pilots controlling Shadow unmanned aircraft systems, but the event at Fort Benning was the first significant demonstration of ground capabilities. The demonstration involved armed, semi-autonomous vehicles “tethered” to an off-site crew to enable remote target observation and engagement. Defense News points out that on one occasion during the test, the weapon system on an unmanned HMMWV malfunctioned and required a crew to correct the issue at the point of malfunction. This intervention received little attention in the numerous press outlets covering the event, rightly so considering all other aspects were performed without issues.

The weapon malfunction begs the question: What if? In future operational settings, when an unmanned vehicle becomes inoperative, there must be a decision point to determine suitable options for dealing with the failure.  A weapon malfunction alone is not a catastrophic capability loss, assuming the unmanned vehicle could still self-recover to a secure location. But much like current tactical operations orders clearly articulate engagement and disengagement criteria, future orders will need to outline decision criteria for immediate recovery, delayed recovery, or abandonment of an unmanned system based on the enemy situation and how recovery will adversely affect a unit’s ability to accomplish its assigned tasks.

This is not a call to turn away from unmanned technology and abandon development of the MUM-T capability. On the contrary, the emerging concept clearly shows potential for significantly enhancing mission capabilities while reducing the risk to the soldier. But what happens when the system loses the ability to move on its own? This is where the Raven story falls short. The Raven’s cost is in the thousands of dollars, the system is designed to be expendable, and the platform has no capabilities that place US forces at risk should an adversary recover one that is lost. (That the Army readily changes missions to recover these systems could be for any number of reasons—hassles of property accountability, aversions to loss investigations, or perhaps even a perception that most routine patrols are low payoff operations, and focusing attention elsewhere does not sacrifice much). However problematic, that is a separate discussion.  In contrast, the larger ground systems tested at Fort Benning are multi-million-dollar retrofitted armored vehicles, with significant firepower and secure communications. Should an adversary recover one of these, they become the owner of several capabilities that could inflict significant harm. In this case, the unmanned partner quickly changes from huge asset to incredible liability. The advantages of remote operations, including those enabled by MUM-T, diminish in the event a unit is required to move to a known high-risk location, likely already under enemy observation and within the enemy’s engagement range. For these reasons, the decision criteria for recovery or abandonment will require thoughtful risk assessment, detailed threat analysis, and direct command involvement.

There is no question that integrating manned crews with unmanned systems presents an opportunity to extend the reach of a crew or operator while greatly reducing the risk from enemy threats. The primary reason this is such an incredible opportunity is because the unmanned system is just that—unmanned. While these much larger combat platforms in development are expensive, they are replaceable. They represent the chance to reduce loss of life. In order to maximize this advantage, and not lose momentum following a system malfunction, the Army must establish the framework and set criteria for determining whether increased risk to mission, risk to the force, or risk to the unmanned system take priority.