No, American Journalists Did Not Lose the Vietnam War — or Disparage the Soldiers Who Fought It 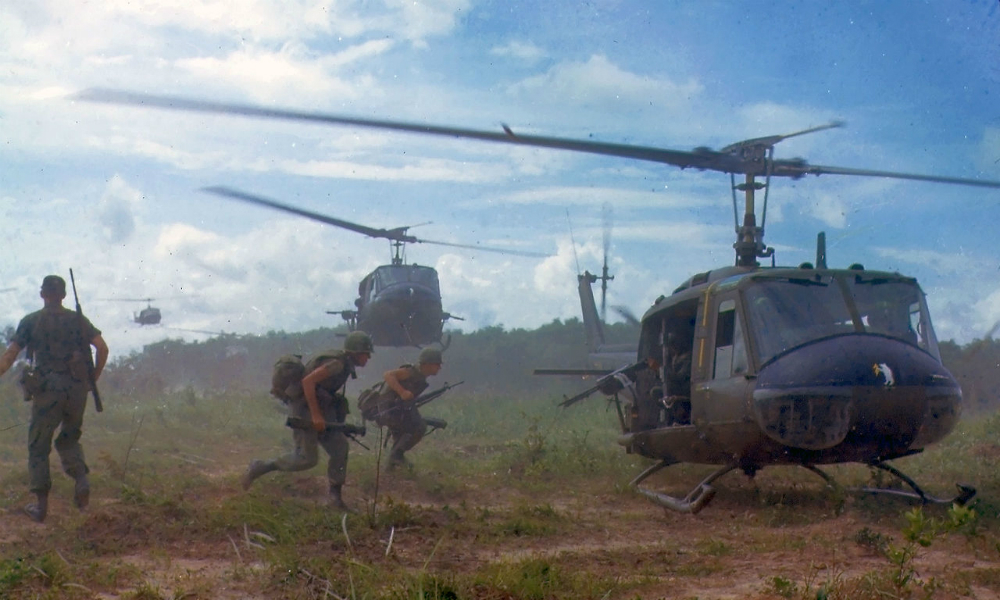 A couple of weeks after the writer Michael Herr died last June, Robert Elegant, a charter member of the bash-the-Vietnam-reporters club, denounced Herr’s widely acclaimed book Dispatches for aiding and abetting America’s enemies in Vietnam. Herr’s book, Elegant wrote in the London Times, “triggered the demonisation of the Saigon regime in the U.S. media, which senior North Vietnamese generals later averred had been their biggest strategic asset.”

There’s a flaw in that argument, though. Dispatches was not published until 1977, two years after the war ended, so it could hardly have influenced North Vietnam’s strategy or the outcome of the war.

That one is unusually easy to disprove. But it is actually fairly typical of many criticisms that Elegant (a former correspondent himself) and others have promoted over the years that directly contradict or ignore the factual record.

The often-repeated charge is that journalists covering Vietnam were biased against U.S. policy, unfairly vilified American soldiers, undermined public support and, prevented the United States from winning a war that would otherwise have been won. But those who have made that argument have, as a general rule, offered no meaningful evidence to support it.

To give just one of many examples: in a review of the Library of America’s two-volume anthology Reporting Vietnam, a critic named Algis Valiunas proclaimed that the reporters whose work appeared in the collection predominantly represented “a single vantage point — the vantage point of those for whom an American defeat would spell moral victory, even a victory for morality itself.” Despite having more than 1,500 pages of material to draw from, though, Valiunas did not provide even a single quote calling for an American defeat.

There’s a reason that critics like Valiunas don’t offer evidence for the idea that mainstream journalists were cheerleaders for a Communist victory. The evidence doesn’t exist.

The Army’s official history of its public affairs operations records frequent disagreements between journalists and military authorities, but almost none having to do with the rights or wrongs or basic national purposes of U.S. policy. A systematic survey of selected newspaper and TV reports from Vietnam, reported in Daniel C. Hallin’s book The Uncensored War, gives the same impression.

There was critical reporting at times on the conduct of the war and the human suffering it caused. But far from promoting a favorable view of the enemy, American journalists conveyed practically no view of the enemy at all. With very rare exceptions, the Vietnamese Communists appeared in their reports only as the opposing force on the battlefield, otherwise unexamined and unexplained. America’s South Vietnamese allies received only slightly more coverage — certainly none that gave Americans at home any meaningful understanding of that society and its institutions.

Charges that the media in Vietnam systematically portrayed American soldiers in a negative light are also untrue. Instead of aggressively looking for stories that would show U.S. troops as war criminals or agents of an immoral policy, American reporters were if anything notably reluctant to report on atrocities or unnecessary civilian casualties.

The My Lai massacre story, for example, was not broken by a journalist in Vietnam and not reported at all until many months after the killings, when the Army brought court-martial charges against 1st Lt. William Calley. The facts were actually available much earlier. Only weeks after the massacre, Radio Hanoi, whose broadcasts were regularly monitored by U.S. news organizations, accurately named the place and the approximate casualty toll. But the broadcast misidentified the American division involved, making it easy for the U.S. command to say that those troops were not operating where the massacre was reported to have occurred.

According to the Army’s official history, correspondents in Saigon accepted the command’s denial without checking and ignored the Radio Hanoi account (so much for promoting the Communist viewpoint!), leaving the story unreported until Seymour Hersh, reporting not for any major outlet but for a little-known agency called Dispatch News Service, started looking into the Calley court-martial more than a year later.

Civilian casualties were rarely newsworthy. When the U.S. 9th Infantry Division released troubling statistics on a six-month campaign in three densely populated Mekong delta provinces, for example, no journalist pursued the facts at the time or for more than two years afterward.

The press release on Operation Speedy Express claimed that nearly 11,000 enemy soldiers had been killed in the operation, which ran from fall 1968 to spring 1969, but only about 700 weapons were recovered. That was about one-fourth of the usual ratio of captured weapons to enemy dead, suggesting that many of those killed may have been civilians, not armed enemy troops. But that possibility was investigated only much later, when a Newsweek correspondent traveled extensively in the hardest-hit province and filed an extensive report in early 1972 showing strong evidence that thousands of civilians had been killed.

Even then, the media responded gingerly. Newsweek’s editors held the story for almost six more months and then printed only a truncated version. Even after the magazine’s piece appeared, other U.S. media did not pursue the story.

Clearly, the record does not support the view that journalists were consistently hostile to American soldiers. Yet many veterans remember the coverage that way. Why that is so became a bit clearer to me a number of years ago, when a Marine Corps veteran came up to me after listening to a panel of journalists discuss Vietnam reporting. He wanted to show me a magazine he had brought with him, open to a photograph he saw as an example of negative reporting.

I didn’t make a note of the magazine name or issue date so am not certain, but I believe the photo was from the siege of Con Thien. It showed a young marine in a bunker, quite close up, crouching next to a sandbag during an artillery or rocket attack. He was facing the camera and his eyes and taut face perfectly showed the tension and fear of that situation. I was mystified that anyone could find that photo hostile. I thought it was a great war picture, full of empathy and compassion, exactly capturing the experience of waiting for that next round to come in.

As the vet went on speaking, though, I realized that what bothered him wasn’t what was in the picture, but what was not in it. It wasn’t heroic. It wasn’t triumphant. And I thought, this guy didn’t want to see a picture of marines sweating out incoming rockets in a bunker in Vietnam. He wanted to see them raising the flag over Iwo Jima. He didn’t want to remember Con Thien or Khe Sanh; he wanted to remember Mount Suribachi.

There wouldn’t have been much point in telling him that his problem was with what happened in his war, not with those who covered it. It wasn’t our fault that there was no Mount Suribachi moment in Vietnam. No journalist could take a picture of a heroic victory that didn’t happen.

Possibly he understood that, as a matter of cold fact. But emotionally, I suspect, he looked at the picture and felt disparaged by the photographer who took it, the magazine that printed it, and by extension all the journalists whose reporting showed him that young marine (and himself) as a victim, an image of fear or maybe even brave endurance, but not the victorious hero he had gone to Vietnam to be. And if in his mind that image was hostile, one could argue with his logic — but not his emotions.

There is a kind of parallel, I believe, between that personal grievance and the larger debate about the policy impact of Vietnam War reporting. The idea that journalists were consistently sympathetic to the Communist side and slanted against Americans is verifiably false. But in the same way they did not picture U.S. troops as victorious, they did not show U.S. policy as victorious either. Instead, news coverage over time increasingly framed the war as a stalemate. That conflicted with the growing need of U.S. policymakers and military commanders to convince the public — and possibly themselves — that their efforts were succeeding.

That, I believe, was a far greater cause of controversy, mistrust, and ill will between reporters and officials than any ideological disagreement. Like everything else about Vietnam this too is debatable, but there’s a reasonable case that in this respect, reporters described the war more accurately than the government did.

Even if they were right on that issue, though, it does not mean the media can take much pride in how they reported that war. Focusing for years almost entirely on U.S. troops in the field and U.S. policy debates at home, American journalists gave their readers and viewers a woefully inadequate view of the war’s real issues and true nature.

On that point, it is instructive to take another look at the calendar-challenged Robert Elegant and his target Michael Herr.

The charitable explanation for Elegant’s confusion is that he mixed up Herr’s book with its precursor, four long articles he wrote in Esquire magazine. Unlike the book, those were published before the war ended. But they do not support Elegant’s claim either. They do not demonize the South Vietnamese regime; they do not say anything about that regime at all. Or about any Vietnamese reality.

Herr’s four pieces combined are equivalent to a 150-page book. But in all those pages there is not a single quote — not one word! — from a Vietnamese. Nor is there any indication that Herr ever talked about the war with any Vietnamese at all while he was in Vietnam. His lens showed only Americans — soldiers, marines and fellow war correspondents. Vietnamese voices, Vietnamese history, the Vietnamese experience of the war are all unmentioned. Without those, whatever their merit as war literature, his works tell us nothing about that war.

To call that a model of Vietnam journalism overall would be an exaggeration (and many journalists would not consider Herr’s writing, with its many fictionalized details, a model of their craft, either). But the parallel is there. Like Herr’s readers, American consumers of Vietnam news during years of heavy coverage learned mainly about Americans in battle, and very little about either Vietnamese side or the Vietnamese roots of the conflict. To reexamine that reporting is to realize that the meaningful story on the media and U.S. officials in Vietnam is not about their differences, but the lack of historical knowledge and understanding that was common to both groups — and was the true cause of the national failure in that war.

Arnold R. Isaacs is a writer based in Maryland. He was a war correspondent in Vietnam and is the author of Without Honor: Defeat in Vietnam and Cambodia and Vietnam Shadows: The War, Its Ghosts, and Its Legacy. He has contributed to a number of other books and also wrote From Troubled Lands: Listening to Pakistani Americans and Afghan Americans in Post-9/11 America, available online at http://www.fromtroubledlands.net.