No Way to Get to the War: Mobilization Problems and the Army Reserve 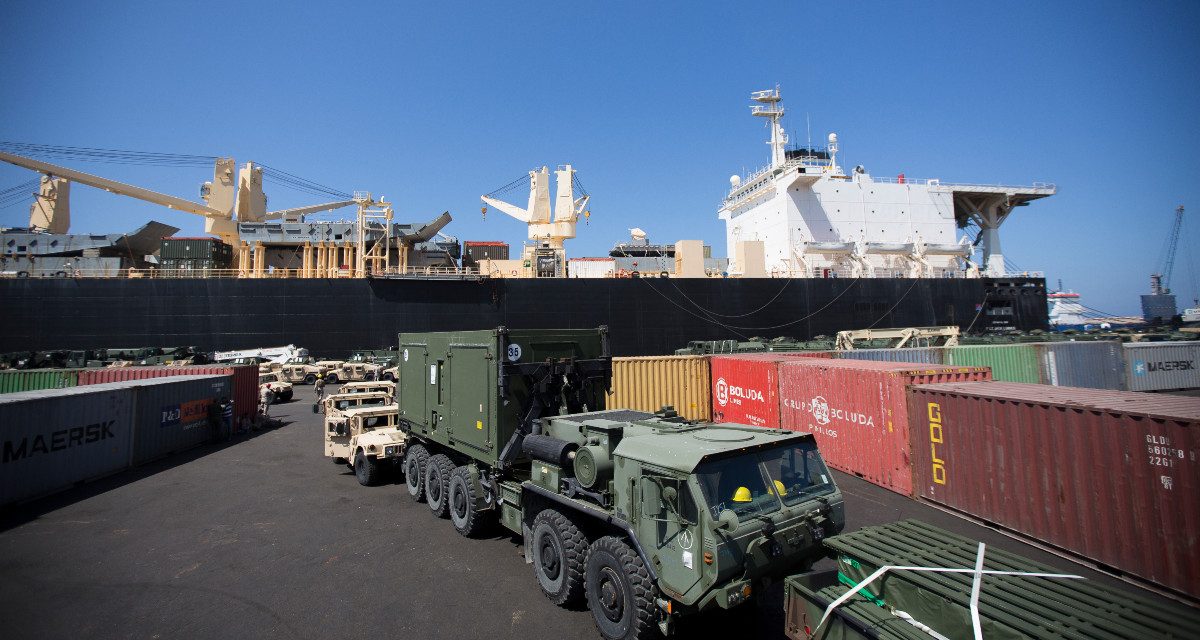 This mobilization—and the speed with which it was conducted—has significance well beyond its direct contributions to the pandemic response. It offers an opportunity to examine the Army Reserve’s role in the future global operational environment. Prior to 9/11, it served principally as a strategic reserve—a source of trained personnel that could be called upon in the event of a conflict. The wars in Iraq and Afghanistan saw the Army Reserve transition into an operational reserve, with units on scheduled rotations to both countries over the better part of two decades. The era of current great power competition will also require an operational reserve, but with an additional capability: dynamic response to crises. The Army Reserve’s COVID-19 deployments suggest that it has postured itself for this environment, but it is still unclear if it can act as an operational reserve for large-scale combat operations with the United States’ current mobilization and sealift infrastructure.

Army Reserve mobilizations have not always gone as well as the one supporting the COVID-19 response. The component mobilized nearly nineteen thousand medical personnel for the first Gulf War, but not without issues. Army Reserve medical soldiers arrived at mobilization stations unprepared to deploy. They lacked critical personnel for deployment, and data representing unit readiness did not accurately represent unit deficiencies. Over sixteen hundred medical officers had not completed a mandatory twelve-week basic officer training course that taught soldiering skills. Doctors reported for duty with medical issues like Parkinson’s disease or the inability to remain standing for more than thirty minutes at a time. Others had left the civilian practice of medicine and had lost all professional certifications. One Army Reserve surgical team arrived at its mobilization station without either of the two thoracic surgeons the unit was supposed to include; one of the two slots was filled by a gynecologist who told the mobilization team that “the only chest he had opened was in medical school and belonged to a goat.”

These anecdotes illustrate situations where units appeared ready for deployment on paper but required personnel and equipment transfers to operate as intended. Such cross-leveling activities inherently slow down the mobilizations. In the first Gulf War, these delays had little strategic effect because the United States slowly built combat power in theater over six months between August 1990 and February 1991. This timeline provided adequate time for the Army to correct deficiencies before conflict and, after the fall of the Soviet Union, no peer existed to interfere with US power projection into the Middle East and disrupt the lengthy, deliberate build-up.

In Iraq and Afghanistan, the operational environment also granted the Army sufficient time to cross-level personnel and equipment between organizations to construct composite units. Under the Army Force Generation Model (ARFORGEN), active and reserve units operated on timetables that made them available to deploy to Iraq or Afghanistan every three and five years, respectively. The planned nature of rotations allowed extensive cross-leveling to occur without impacting force availability. As one Army Reserve colonel told me, his military police battalion that deployed to Baghdad in 2006 was his unit in name only; only twelve of the soldiers deploying came from his original battalion. This kind of last-minute reorganization harms unit cohesion and effectiveness to such a degree that they can take months to rebuild.

So why did the Army Reserve’s recent mobilization in support of the COVID-19 response go well?

In 2017, Army Reserve leaders recognized that the return to great power competition and threats posed by rogue regimes required a new organizational approach, labeled Ready Force X. During the later periods of the Cold War and during Operations Desert Shield and Desert Storm, the relative stability of the operational environment and large active-duty force made the Army Reserve a strategic reserve—only to serve in major wars, with significant notice, at scale. That changed in the years after 9/11, when the active Army’s small size caused the Army Reserve to become more of an operational reserve—one routinely tasked to deploy to meet limited demand on known, stable timelines under the ARFORGEN cycle. Now, the increasingly multipolar nature of the international order, relatively small size of the Regular Army, and concentration of combat enablers inside the Army Reserve has caused the Army to continually rely on it to conduct operations. Ready Force X is the Army Reserve’s organizational solution to satisfy the demands associated with that reliance on it in an era of dynamic, great power competition.

Under Ready Force X, the Army Reserve carefully analyzes theater-specific war plans and identifies the capabilities and units that the joint force will require it to deploy in the first ninety days of a conflict. Once combatant commands specify these capabilities, the Army Reserve selects units to meet these needs and gives them priority for manning, equipment, training, and funding to ensure that they can quickly aggregate, mobilize, and deploy. Other Ready Force X units include force generators and instructors; if a major war occurs, these units and soldiers will mobilize to increase US capacity to grow its Army. Over thirty-eight thousand Army Reserve soldiers and seven hundred units of action stay at this higher state of readiness to respond to contingencies (though this number fluctuates). Staff officers regularly screen each of these formations for personnel and equipment deficiencies and, when identified, create plans to fix them shortly before or after mobilization occurs.

Though the Army Reserve only mobilized a little over 1.5 percent of its 190,000-person force for the COVID-19 response, the pandemic provided an initial test of its organizational construct. The processes and systems employed mirrored those that the Army would execute in a major conflict. Lessons learned from the response will drive development of a yet to be named successor construct to Ready Force X. At the same time, the strategic risk that Ready Force X (and its successor) mitigates also highlights an imbalance in capabilities between the active Army and Army Reserve that has grown since the 1970s.

By deliberate design, almost 80 percent of the Army’s combat support and combat service support units reside in the National Guard and Army Reserve. The Department of Defense’s adoption of the Total Force Policy in 1973, demobilization after Vietnam, and the creation of a more expensive, all-volunteer force increased its reliance on reserve forces. In 1993, the “Offsite Agreement” created a new division of labor between the Army National Guard and Army Reserve. The Army National Guard would largely mirror the Regular Army, and the Army Reserve would “specialize in combat support and service support at corps levels and above.”

As a result, the Army Reserve supplies more than 50 percent of the Army’s transportation, medical, and quartermaster capabilities and over 30 percent of its engineer, chemical, military police, and intelligence manpower. In certain critical capabilities, like petroleum distribution, water purification, civil affairs, psychological operations, and railroad operations, the Army Reserve has a near monopoly. The Army Reserve supplies nearly all enablers at the corps and theater army level, echelons that would be heavily involved in large-scale conflict. Moreover, because the Army provides the bulk of sustainment and enabling forces to other services during campaigns, the joint force cannot conduct sustained operations without mobilizing the Army Reserve.

The Army and joint force’s reliance on the Army Reserve for sustainment and enabling capabilities is not a problem provided the nation has the infrastructure to mobilize and transport reserve forces to mission areas at the speed and scale required by contingencies. Ready Force X has placed the Army Reserve in a posture for rapid deployment, but it cannot entirely compensate for diminished US capacity for mass mobilization and over-the-shore logistics. In 2008, the Army maintained eight different mobilization force generation installations to prepare soldiers for deployment. In 2020, it has two. Many Army Reserve formations can mobilize from their home stations, but they still require transportation to the theater of operations. Once capable of rapidly moving armored divisions to Europe, America’s military sealift capacity now consists of aging vessels, many over forty years old. In a 2019 exercise, just 40.7 percent of Military Sealift Command and Maritime Administration vessels were fully ready to support a sealift operation in a five-day timeframe.

The decreasing number of forward-stationed US forces already inhibits rapid responses in Europe and Asia. US reliance on reserve forces in conjunction with diminished mobilization and sealift capacity incentivizes adversaries to pursue quick escalation of conflicts before the United States can intervene. The Army Reserve has postured for rapid deployment, but posture cannot compensate for diminished US capacity for mass mobilization and over-the-shore logistics if the need for a large mobilization arises.

Most of the assumptions concerning the operational environment in both the National Defense Strategy and the Army’s future operating concept (Multi-Domain Operations) suggest that the likelihood of mobilizing mass numbers of reserve soldiers remains small. Instead, both documents discuss an atmosphere of competition, or in the case of Multi-Domain Operations, the possibility of “brushfire” conflicts to resolve limited political disputes before a return to nonviolent competition. These are the kind of confrontations the Department of Defense would prefer. A short, expeditionary war emphasizes US strengths in fielding a small number of advanced platforms and proficient formations abroad. It does so without relying on the United States’ vulnerable defense industrial base, causing financial overreach, or transporting and sustaining a large force across an ocean in contested conditions.

The United States must avoid preparing for the kinds of conflict that it would like to fight, while ignoring the types of conflict that could prove most damaging. The Army Reserve has taken up an operational role and a posture that allows it to compensate for imbalances in the Army’s force structure. Its role in the COVID-19 response offered an initial proof of concept. Still, it is unclear if it can mobilize and deploy quickly enough for large-scale combat operations with existing mobilization infrastructure and sealift capacities. If the Army and joint force want the Army Reserve to play a crucial role in operations, they need to make investments in infrastructure and sealift beyond that required for a limited conflict or pandemic response. If you want an operational Army Reserve, you need operational mobilization and sealift infrastructure as well.

Jules “Jay” Hurst is an Army Strategist (FA59) in the US Army Reserve.