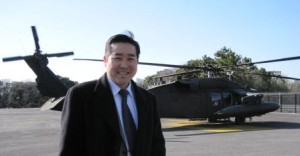 Dr Katagiri received a B.A. from the University of South Carolina, a Master of International Affairs from Columbia University, and a Ph.D. in political science from the University of Pennsylvania. He joined Saint Louis University after five years of federal service teaching at Air War College, a joint military graduate school for senior officers and officials of the U.S. government and international officers at Maxwell Air Force Base. In 2015, he received the Meritorious Civilian Service Award from the Department of the Air Force.

Dr Katagiri’s research focuses on irregular warfare, military strategy, and East Asian security. His book, Adapting to Win: How Insurgents Fight and Defeat Foreign States in War was published from the University of Pennsylvania Press in 2015. In the book, Dr. Katagiri investigates the circumstances and tactics that allow some insurgencies to succeed in wars against foreign governments while others fail. He is working on his second book on Japanese military power and East Asia and has been a visiting fellow in Taiwan, South Korea, the Philippines, and Japan. His research has been supported by the US Air Force Institute for National Security Studies, Air War College, RAND Corporation, Smith Richardson Foundation, and Matsushita International Foundation. His articles have been published or forthcoming in Asian Survey, Small Wars and Insurgencies, Harvard Asia Quarterly, among other journals.