North Korea’s Two New Strategic Missiles: What Do We Know and What Do They Mean for US Deterrence? 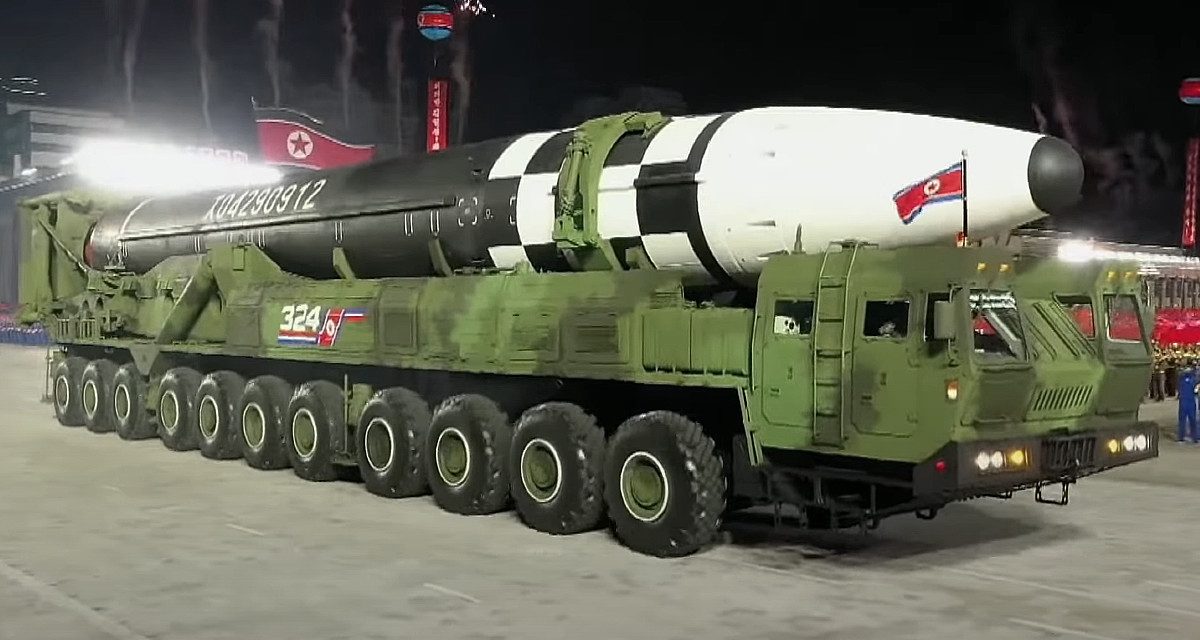 North Korea has conducted its annual military parade to commemorate the anniversary of the founding of the state’s communist ruling party. The parade featured a tear-filled speech by Kim Jong-un outlining the challenges facing Pyongyang, including Covid-19 and sanctions, and thanking the members of the armed forces for their service. The parade has historically generated a degree of excitement internationally as North Korea tends to showcase new equipment to demonstrate its military power to its neighbors and to the United States. This year’s parade did not disappoint, with new strategic systems in the spotlight intended to convey Pyongyang’s capability to present new challenges to the United States’ and its allies’ security and nuclear deterrence.

This year’s parade featured what appear to be essentially clones of the Russian Armata main battle tank, the US M1128 mobile gun system, the Japanese Komatsu light armored vehicle, and the Russian Tor air defense missile system. The North Koreans also showcased an anti-tank guided missile vehicle not seen since its first appearance in 2018, and a new anti-ship cruise missile. Pyongyang’s Hwasong-15 intercontinental ballistic missile (ICBM), the longest range tested missile in its arsenal, was also displayed, along with the giant KN-25, which “blurs the distinction” between multiple-launch rocks systems and short-range ballistic missiles—although it appeared to have a chassis problem.

Most notable on display was a new solid-fuel submarine-launched ballistic missile (SLBM), believed to be the Pukguksong-4, with a range that at least would allow it to strike South Korea and all of Japan with nuclear warheads. Initial assessment from the International Institute for Strategic Studies and 38 North suggests that the Pukguksong-4 is shorter in length than its predecessor Pukguksong-3. But it is larger in diameter, possibly 2.5 meters, which is on par with Russia’s Bulava, China’s JL-2, and the US Trident II SLBMs. There are visual indications of improvements to the rocket engines and solid fuel system. The Pukguksong-4 appears to be constructed with wound filament rocket casings for the fuselage that North Korea has had the capability to produce since 2017. Wound filament allows for the construction of a lighter rocket, and therefore, increased range and payload.

It is believed that the Pukguksong-4 was developed for service on North Korea’s modified Romeo-class ballistic missile submarine with two or three of these weapons mounted in the extended submarine sail. But at the parade the Pukguksong-4 was not supported by sailors but by ground forces and was transported on a transporter erector launcher, or TEL vehicle. This raises the prospect that it could be a land-based derivative of the Pukguksong-3 SLBM, just as the Pukguksong-2 was a land-based derivative of the Pukguksong-1 SLBM. The nose cone suggests that the Pukguksong-4 could carry three warheads, likely on one multiple re-entry vehicle as the United States, UK, France, and the Soviet Union did in the early days of their nuclear deterrent development. Given advancements, it is very likely that the Pukguksong-4 has a range greater than its predecessor’s two thousand–kilometer range, but not great enough to strike targets in Guam. There is the concerning prospect that the Pukguksong-4 is the basis of a new compact, land-based, road-mobile ICBM with at least three warheads that could deploy to a launch site with a much smaller signature than North Korea’s existing ICBMs and launch much more quickly than a liquid-fueled ICBM, perhaps just a matter of minutes.

Finally, and most importantly, as expected Pyongyang unveiled a new liquid-fueled ICBM, likely designated either Hwasong-16 or KN-27. Experts agree that the new ICBM is about twenty-five to twenty-six meters long, making it the largest road-mobile ICBM in the world (although the Russian liquid-fueled Sarmat ICBM now under development appears bigger). The diameter of the new missile is likely between 2.5 and 2.9 meters and its first stage is liquid powered, potentially by a cluster of four RD-250-type engines for a total sea-level thrust twice that of the Hwasong-15 ICBM. The second stage remains a bit of a mystery. Note that a road-mobile ICBM and TEL vehicle of this size has a huge signature in a country that does not have a great deal of roadway and the fact that it is liquid fueled makes it vulnerable to discovery and attack before launch. As well, it is worth noting that the size and configuration of the TEL vehicle indicate that North Korea now has developed a domestic capacity to manufacture both the vehicles and the ICBMs to go with them, meaning their deterrent effect will continue to grow.

By way of comparison the new missile’s launch weight of 100,000–150,000 kilograms is significantly greater than that of the Chinese DF-41 solid-fuel, road-mobile ICBM (80,000 kilograms) and the Soviet/Russian solid-fuel, rail-mobile SS-24 ICBM (104,500 kilograms). As Vann H. Van Diepen and Michael Elleman noted at 38 North, it could deliver 2,000–3,500-kilogram payload of three or four warheads in one multiple re-entry vehicle to any point in the continental United States. It could also deploy a massive warhead to a US target like the Soviet-era SS-18 Mod 1 ICBM, which was geared to first-strike and counterforce attack. North Korea’s new ICBM may also designed to deliver multiple independently targeted re-entry vehicles and missile defense decoys, although this is likely at some time in the near strategic future.

Its size, power, and payload make the missile perfect for city-busting countervalue attacks on the United States, and by extension most of North America, and potentially in the future for counterforce strikes depending on its level of accuracy. The missile could also be intended to overwhelm US missile defenses that fire a salvo of four interceptor missiles at each warhead. The United States would need twelve to sixteen interceptors per missile for a potential successful kill—at a cost of around a billion dollars. Even a small force of North Korea’s new missiles with their heavy payload of several warheads would thereby provide the basis of a credible deterrent where some warheads would likely get through to North American cities presenting a real challenge to existing US missile defenses, if not rendering them irrelevant in the near future.

All of this suggests very strongly that North Korea is developing a nuclear deterrent along the path of other traditional nuclear powers, which will include a variety of strategic systems—a deterrent that, for anybody who still harbors hope that denuclearization is possible, they have no intentions of giving up. A likely test of either of the Pukguksong-4 SLBM or the new ICBM could come in the next month or two, possibly prior to the US presidential election for potential impact on its outcome. Both strategic systems represent a serious challenge to US security interests at home and abroad and will most likely require a new and robust approach to nuclear deterrence, force structure, doctrine, and the size of US Missile Defense.