Not Your Mother’s Coast Guard: How the Service Can Come into Its Own Against 21st Century Threats 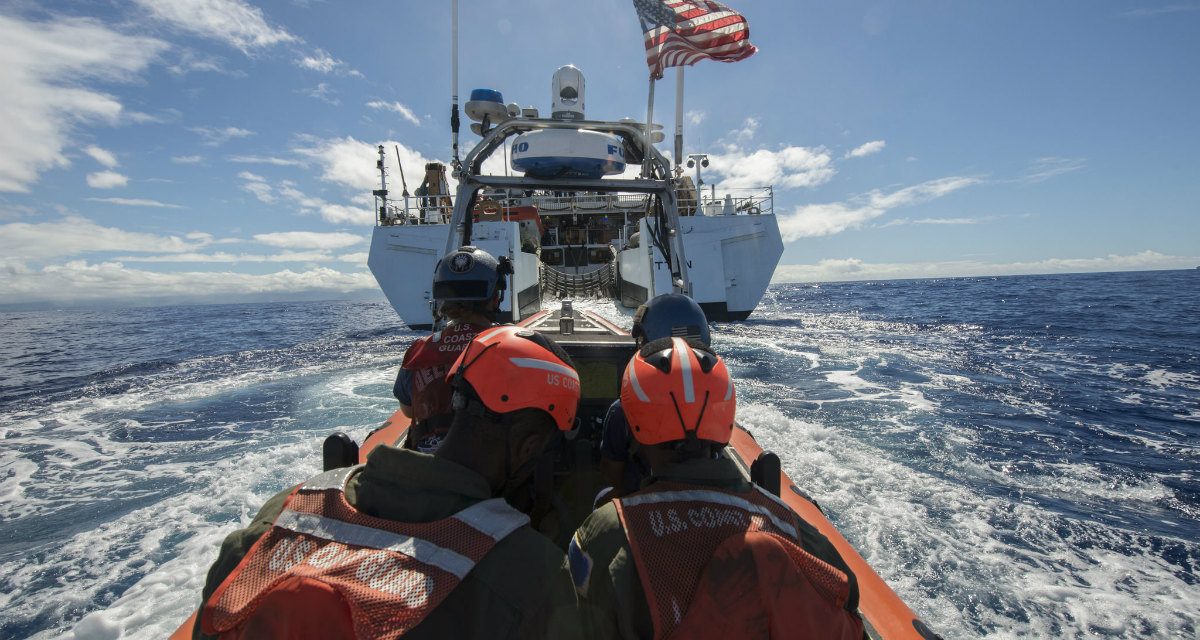 The Coast Guard is a discrete and flexible national security tool, often filling unique maritime niches in support of Department of Defense or combatant commanders’ needs. Such roles, though, are typically considered to be almost incidental components of the service’s broad and diverse mission portfolio, which is primarily domestic and includes both regulatory and law enforcement responsibilities. With the release of the 2017 National Security Strategy, however, the Coast Guard has been presented with an opportunity to maximize its value to a government that appears to be taking a different view on which activities and capabilities should be emphasized in the national security realm.

The NSS document starts with an emphasis on homeland security, a domestic focus that is novel when compared to previous editions. This gives the Coast Guard—which falls under the Department of Homeland Security, possesses federal law enforcement authority, and performs a wide variety of domestic mission sets—a chance to capitalize on its unique nature, capabilities, and potential. Specifically, by making a priority of enhanced border security and layered defenses, this NSS points to the importance of the Coast Guard’s role in conducting enforcement actions—drug and migrant interdiction—at sea (a tactic that has the effect of extending the nation’s borders). Moreover, the NSS’s prompt to “work with foreign partners to deter, detect, and disrupt suspicious individuals well before they enter the United States” provides the Coast Guard with an opportunity to strengthen and expand its set of bilateral agreements throughout the Western Hemisphere in order to gain more flexibility and enhanced partnerships for interdiction activities conducted in cooperation with key allies. As the NSS indicates that such activities in support of its homeland and border security goals will receive “advanced technology [and] the employment of additional personnel,” smart adjustments by the Coast Guard could well bolster the case for force expansion and increased interagency support in order to continue and expand its efforts.

Under this same homeland umbrella, the NSS likewise stresses the importance of transportation security and domestic resilience—both areas in which the Coast Guard can embrace leadership roles. The service is already a regulator and protector of the marine transportation system, and is well positioned to take up the NSS’s challenge to raise security standards through industry and international partnerships. In specific reference to international stakeholders, the International Ship and Port Facility Security (ISPS) Code has been an extremely valuable tool for raising global maritime security standards, and the Coast Guard’s support of the code through its International Port Security Liaison Officer (IPSLO) program has been highly successful. The service would do well to assess and propose any needed changes to the ISPS or IPSLO program now, when the NSS is so clearly stating the importance of those things.

In terms of domestic resilience, the Coast Guard has expansive disaster response and incident command capabilities and responsibilities for maritime incidents, and would be a natural leader in working with industry and state and local partners to enhance capabilities in the NSS’s identified areas of risk management, planning, preparedness, and information sharing. Use and expansion of existing Coast Guard-led forums like Area Maritime Security Committees (which bring together port authorities, Captains of the Port, and other intra- and intergovernmental stakeholders for information sharing and exercises), and unique interagency models such as Joint Harbor Operations Centers (or Sector Command Centers–Joint) seem to be ideal for leading implementation of such initiatives.

The 2017 NSS also explicitly states the intention to “promote American prosperity,” with a focus on both boosting domestic energy production and improving infrastructure in general. For the latter, the document addresses the need for both structural improvements and enhanced security, two areas that will be important to (and reliant upon) the Coast Guard. The service not only has a prominent role in protecting maritime critical infrastructure, but also a stated desire to update its own (often degraded) waterfront facilities. Now may be the time for the Coast Guard to find creative ways to update its own bases and facilities in the context of an overall push for improved physical structures on and alongside the nation’s waterways and ports.

In terms of energy production, too, the Coast Guard will be relied upon for both its regulatory and security roles. In recent years, the service has emphasized the fact that a safe increase in domestic movement of petroleum products on the country’s rivers and in its ports will be dependent upon a more capable Coast Guard. While it is true that the NSS focuses on private sector development of energy export capacity, expanded operations and volume at coastal terminals will nonetheless rely heavily on the Coast Guard’s regulatory role of such activities. This could mean a more robust workforce, better technology and tracking capabilities, or enhanced authorities for the service.

Further, the NSS calls for efforts to “protect global energy infrastructure from cyber and physical threats.” The Coast Guard, of course, is the nation’s protector of infrastructure in the maritime domain. With both a potentially increased workload due to the intended expansion in domestic energy production and the addition of a related cyber mandate, the Coast Guard will have to respond to this element of the NSS by proposing new personnel programs, oversight abilities, and/or partnerships. In addition, a robust program for inspecting and ensuring compliance with cyber components of infrastructure has long been needed, and the NSS provides an impetus to move forward on such an initiative now. To ensure lasting success, the Coast Guard should partner with industry stakeholders to formulate a cyber regulatory framework characterized by clarity of requirements, ease of updating along with technological change, and an open information-sharing environment.

Not surprisingly, the NSS also addresses cybersecurity in other contexts. A specific cyber emphasis is included in the homeland-focused section of the document, giving the Coast Guard a distinct opportunity to improve its own network defenses while also, as mentioned, partnering with industry to protect the cyber components of ports and waterways operations. In addition, a later section of the document further deals with the need to renew cyber capabilities in order to ensure military strength. That’s likewise relevant content for a military branch that’s in the nascent stages of building and maturing a cyber workforce and the expertise that it requires. Given the Coast Guard’s unique roles and authorities, in other words, its cyber mandate and capabilities can and should align under the NSS’s defined priorities for both homeland security and military strength.

Perhaps the most unique—and most promising—element of this NSS for the Coast Guard, though, lies in the strategy’s treatment of illicit actors and irregular threats. The document speaks to the need to “retain a full-spectrum force,” stating the intent to “develop new operational concepts and capabilities to win . . . including against those operating below the level of conventional military conflict.” The Coast Guard has a long and not well-advertised history of dealing with irregular threats, but often remains on the outside of broader military structures, processes, and discussions regarding such tasks. The fact that this NSS explicitly acknowledges the links between terrorist networks and criminal, drug, and “other irregular threats” should not go unnoticed: it gives the Coast Guard the opportunity to emphasize its unique capabilities, partnerships, and successes in this realm. References to threats and operations “below the level of conventional military conflict” or “below the threshold of military conflict” appear four times in this strategy. If that’s a niche that the government now wants to emphasize, the Coast Guard needs to be in the vanguard of associated efforts.

Luckily, the service is well-poised to do so: the ties between drug traffickers, criminals, and terrorists were substantially addressed in the Coast Guard’s 2014 Western Hemisphere Strategy (which referred to transnational organized crime networks repeatedly), and their inclusion in an NSS provides testament to both the strategic foresight of the Coast Guard and to the potential for a new and more compelling way to perceive of and articulate the true impacts of some of its core missions. A Coast Guard that disrupts powerful transnational criminal networks, which are linked to and overlap with terrorist actors (to include providing methods and routes for smuggling and exploitation of border enforcement weaknesses), is a more valuable national security tool than one that merely makes sporadic drug seizures at sea.

Operations at the crime-terror nexus in the Western Hemisphere specifically are thus ideal for the Coast Guard. The NSS cites several initiatives in which the service can take leadership roles: dismantling transnational organized crime networks, improving planning and intelligence, and interagency cooperation. The Coast Guard already has a forward-deployed posture for disrupting transnational organized crime networks, with cutters patrolling around Central and South America and the Caribbean. Capitalizing and expanding upon that posture now makes a great deal of sense. Specifically, the idea of a squadron of Coast Guard patrol boats dedicated to operations in Central America has been favored by Coast Guard leadership in recent years. Perhaps the initiatives that this NSS envisions as being necessary to disrupt criminal networks (and, by extension, illicit actors including terrorists) will provide the needed justification to make it a reality.

There has perhaps never been a better opportunity for the Coast Guard to assert itself in terms of its national security roles, whether in protecting the nation’s borders or operating in the cyber realm, in protecting maritime infrastructure or safeguarding the domestic energy sector, in leading the effort to make ports resilient or disrupting criminal and terrorist networks throughout the Western Hemisphere. With this in mind, the service should intelligently respond to the 2017 NSS by reforming and articulating the impact of current efforts and refocusing or innovating in areas that it did not previously emphasize. In this way, the Coast Guard can usher in an era of more robust and effective operations in the national security sphere, making the most of its unique nature in order to protect the country on a host of important fronts.

Kevin Duffy is a commander in the United States Coast Guard and the commanding officer of Maritime Safety and Security Team Miami. He previously led the Coast Guard’s Middle East Training Team and served in the office of the Secretary of Homeland Security. Kevin writes and publishes widely on topics including national security, maritime issues, culture, religion, and sports.

The views expressed herein are those of the author and not necessarily those of the Coast Guard, Department of Homeland Security, or any other government agency.