Nothing is Forever: When the US Military Eventually Leaves the Middle East, It’s Going to Need a Plan 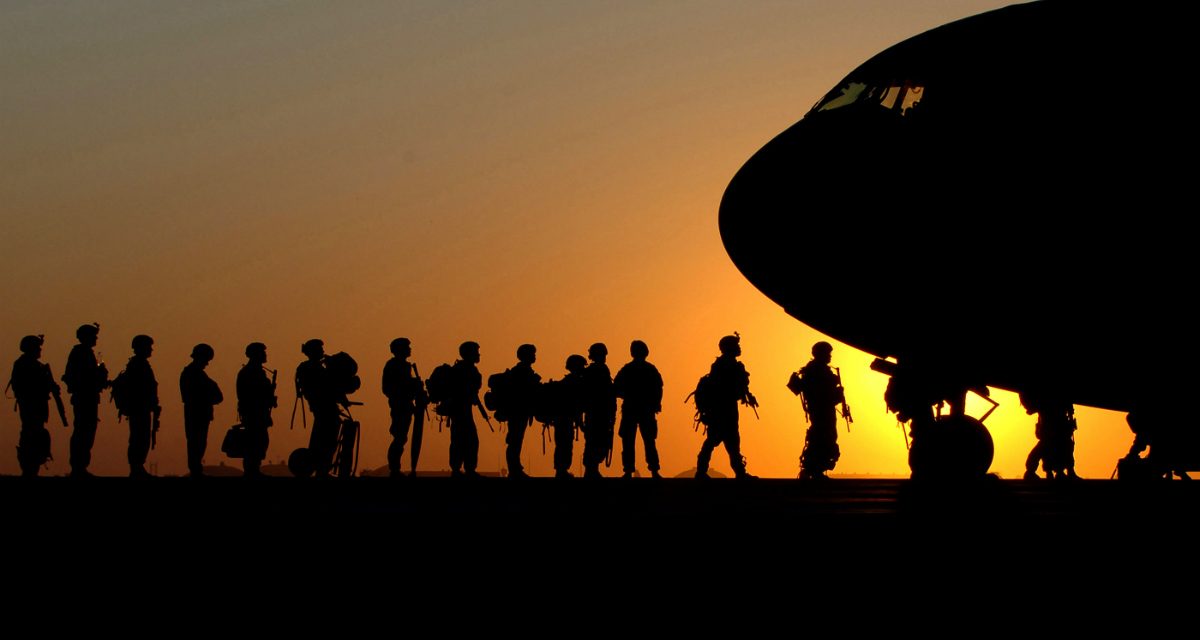 Fifty-one years ago, British Foreign Secretary George Brown informed his American counterpart that the United Kingdom was leaving the Persian Gulf in the next few years, expediting an existing withdrawal plan. Britain was decamping because it had to: it no longer could afford the costs of its imperial commitments throughout Asia.

The United States today is different from 1960s Great Britain in two important ways. On the one hand, it has not (yet) overextended itself to the point where it is forced into an ignominious retreat from the Middle East stage. That’s the good news. Unfortunately, it also doesn’t have a coherent plan for how to address the future of its regional posture before such overreach becomes fact—or in the event internal conditions in the Middle East render US presence untenable.

The latter prospect warrants more discussion than it has received. In the immediate wake of the 2011 Arab Spring, there was concern over the internal stability of the states America relies on to host its forces in the Middle East. In particular, there were palpable fears about Bahrain, the tiny island emirate that hosts the US Fifth Fleet, but which also is home to a tenuous balance between a Sunni monarchy and a majority Shiite population. As the regional situation slowly stabilized—sadly with little real positive change for the people of the Middle East—the American perspective returned to one of complacency.

Yet the social and economic ingredients for additional upheaval remain. No government has truly addressed the underlying grievances that drove the Arab Spring. Most regional states have chosen a path combining superficial reforms and increased state repression. There continues to be widespread reliance on the “rentier model,” an economic system through which regimes essentially “bribe” their populations with the fruits of oil exports in exchange for fealty to authoritarian governing structures. But as Marwan Muasher explained last year in a cogent Foreign Affairs article, the rentier system is not sustainable indefinitely in the Middle East. Sooner or later, the bill will come due, particularly if oil prices remain low. There’s every reason to believe that 2011 wasn’t an anomaly, but rather a precursor to more substantive—and conceivably violent—change in the years ahead.

This prospect, as much as anything, should be driving a reassessment of the US regional posture. Today, the United States maintains an extensive basing structure in the Middle East, one significantly swollen from the relatively limited footprint it maintained for most of the Cold War. The American military now operates out of major facilities in Bahrain, Jordan, Kuwait, Qatar, Turkey, and the United Arab Emirates, while still actively fielding combat forces in Iraq and Syria. With the exception of those in Bahrain and Turkey, none of these bases existed prior to the 1991 Gulf War. Significant cuts to that architecture could be made while still retaining a viable presence.

To put down a marker for discussion, I propose America consider moving back to the Cold War-era model of one or two major facilities, with the likeliest candidates for retention being al-Udeid Air Base in Qatar and West al-Mubarak Air Base in Kuwait, which is currently under construction and due to open in 2023. Though not as robust as a seaport, each base could facilitate the reintroduction of additional American forces, should the need arise. And while neither Kuwait nor Qatar is immune from the societal pressures that will continue to force internal change in the Middle East, they are arguably better long-term bets than other states on which the United States currently relies, like Bahrain.

Closing a large portion of America’s regional basing infrastructure shouldn’t be done lightly and needs to play out over time; a precipitous departure is likely to be destabilizing to the region and detrimental to US interests. But at a minimum, developing a plan for a steady, deliberate drawdown—over the course of a decade, perhaps—seems reasonable.

To be clear, there would be strategic and operational consequences to American withdrawal. Facilities like Naval Support Activity Bahrain are unique and not easily replaced; losing them will have consequences for how the US Navy operates, not only in the Persian Gulf itself, but also the broader Indian Ocean. To some extent, that is the point. By culling bases—or at least discussing it—there would be a knock-on effect of forcing clarification of long-term US strategy in the Middle East, ideally replacing the wholly reactive approach that has dominated US actions in recent decades.

There are, of course, potential dangers to America departing the Middle East in general and the Persian Gulf in particular. As Anand Toprani ably explained earlier this year, the “shale revolution” is not a panacea for American energy security: the Persian Gulf will remain an essential source of global supply and an important arbiter of energy pricing. Likewise, the intentions and capabilities of major powers like China, India, and Russia, also need to be considered as America assesses how much risk it is willing to assume by reducing its regional presence.

These factors shouldn’t be dismissed. My argument is that there are probable scenarios in which the perils of staying—either in terms of the Middle East’s uncertain domestic situation or because of the real potential for America to overextend itself militarily and financially— outweigh the other dangers. Being prepared to confront such scenarios in a deliberate and responsible manner is sensible. Moreover, a ten-year period of withdrawal would provide an ample window to assess and adapt to risks, allowing America to determine how far it wants to draw down.

While still retaining one or two major bases in the long term seems prudent, a complete withdrawal from the region shouldn’t be dismissed out of hand. As the discussion of extracting America from its “Middle East purgatory” has evolved over the past year—thanks in large part to a seminal essay by Mara Karlin and Tamara Cofman Wittes—there has been a reticence to propose truly radical changes to US force posture. That should change. It might be that US interests are best served by drawing down all of its forces in the next ten to fifteen years. Even if this isn’t the case, having a “zero option” on the table would force greater circumspection about alternative options for retaining US forces in the Middle East. America should have specific reasons for keeping bases in the long run, not do so simply because it has in the past.

That said, any drawdown in US presence in the Middle East—even a complete one—should not be misconstrued, as it inevitably will, as an “isolationist” move. There are a number of ways the United States could remain engaged in the regional security architecture even without permanent basing, whether through military-to-military contacts, ongoing provision of technological support to states it has sold weaponry to, and cooperation with countries like Israel on ballistic missile defense.

Additionally, a significant decrease in the US force posture in the region actually would increase the necessity of maintaining strong allied relationships elsewhere. For example, NATO’s logistical and basing infrastructure could be critical in facilitating a reintroduction of large numbers of US forces back into the Middle East if the need arose. Moreover, removing its forces from Southwest Asia doesn’t imply that America must abandon its commitments in East Asia, as the British did. In fact, as others have argued, a scaling back of US Middle East presence might be necessary to bolster American commitments in the Western Pacific (or in Eastern Europe).

Nor are basing decisions immutable. Because American forces leave the region doesn’t mean that they can never return. Saudi Arabia admitting hundreds of thousands of American forces onto its territory once seemed unfathomable, but that’s precisely what happened following Saddam Hussein’s invasion of Kuwait in 1990. Iraq re-admitting US forces also once seemed a non-starter, but the threat from ISIS changed that. Fear can be a powerful motivator when it comes to granting access.

The US regional basing structure also has been more fluid than most are willing to recognize. Al-Udeid—today a lynchpin of the US basing structure—was itself a hasty replacement for Prince Sultan Air Base, as American forces began to depart Saudi Arabia in April 2003. Muwaffaq Salti Air Base in Azraq, Jordan was built up rapidly to accommodate US forces engaged in anti-ISIS operations, much like Kharshi-Khanabad in Uzbekistan was quickly adapted to US needs in support of the invasion of Afghanistan.

This isn’t to suggest that access to bases is always going to be easy. The physical demands of expanding facilities in austere environments and the diplomatic complexities of negotiating status of forces agreements are daunting. But neither should these challenges be used as excuses for questioning whether the existing US basing structure in the Middle East best serves American interests and, just as importantly, whether those facilities themselves might hurt US security as the internal security situation in regional states continues to evolve.

Rather than supporting their ostensible objectives of securing the Gulf and ensuring energy flows, American bases could become liabilities (or worse, targets) amid greater social turmoil in the Middle East. In that event, they could constrain American freedom of action or force it to double down on support for increasingly repressive regimes in the face of domestic uprisings. If, in fact, a sequel to the 2011 Arab Spring is in the offing—perhaps one even more tumultuous and far-reaching—it might be better for most, if not all, American bases in the region to be elsewhere when it comes round.

But that, again, will require some conception of what US basing in the region should look like long term and how to scale it back. The British in the 1960s didn’t have a choice, but they at least understood what they were trying to achieve. America today still has options, but it desperately needs a plan.

Mike Sweeney is a disillusioned former think tanker. He once wrote an essay, “Could America Leave the Middle East by 2031?” He’s still not sure about the answer. The views expressed are those of the author and do not reflect the official position of the United States Military Academy, Department of the Army, or Department of Defense.