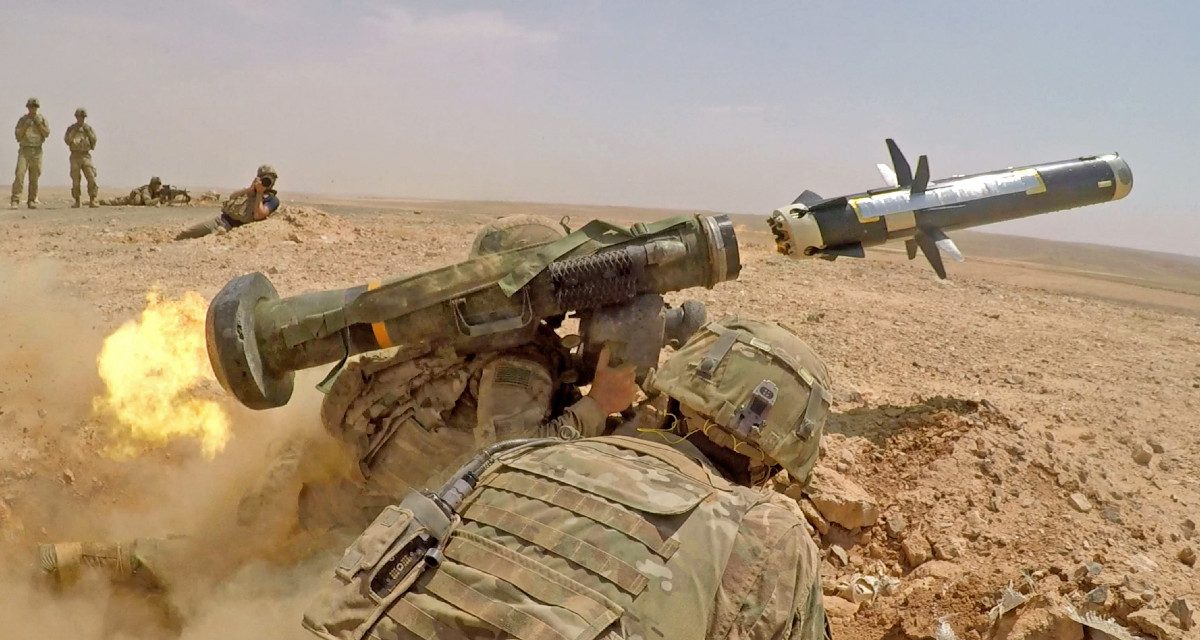 I would rather be the hammer than the anvil.

Ever since modern tanks’ first appearance on the twentieth-century battlefield, infantry forces and their armored counterparts have been engaged in a sustained arms race with one another. Improvements in antitank weapons led to armor better able to withstand them and vice versa, with pendulum swings marking the temporary advantage of one or the other. In recent years, the balance rested firmly on the side of well-trained infantry with both advanced guided missiles and unguided rockets. The greatest of these capabilities are fire-and-forget, guided, top-attack missiles—the premier model being the American-made Javelin. This weapon allows a single soldier to target and destroy even the most heavily armored main battle tank with an almost guaranteed kill rate, at great range and with minimal risk.

But infantry’s advantage isn’t permanent. As tanks with new capabilities are fielded, infantry forces will have to respond, and cannot wait for a new generation of capabilities to provide battlefield solutions. Instead, infantry units should begin conceptualizing, refining, and training new tactics, techniques, and procedures.

For tanks, in the early stages of this arms race, developing thicker armor was the simple way to protect against new weapons. But that was no longer enough to defeat weapons like high-explosive antitank (HEAT) rounds, first deployed by infantry in World War II (to varying degrees of effect), or explosively formed penetrators (EFPs). The first counter to these weapons was spaced armor, which dissipated an incoming round’s penetrating power in open air before it reached the main tank armor. The next development was explosive reactive armor. Since the 1970s, this has been used to defeat HEAT and EFP rounds by exploding small charges outward from the armor, interrupting the penetrating blast. In response, infantry forces began fielding weapons like the modern Javelin and TOW missiles, which have countered explosive reactive armor with tandem warheads that use one penetrating charge to trigger the defensive detonation prior to the second charge detonating, destroying the target.

Global military forces—including those of America’s near-peer rivals—today have deployed systems designed to protect their armored vehicles from the most likely threats from infantry. These systems fall into a category called active protection systems (APS). These systems “electronically sense incoming direct-fire ATGMs [antitank guided missiles] and . . . HEAT munitions, and they defeat the incoming munitions before they impact the vehicle.” APSs change the calculus of war, from an infantry perspective, by greatly reducing the effectiveness of chemical-energy antitank weapon systems without requiring an increase in armor thickness.

The Israeli Army has perhaps the most widely known APS, called Trophy. First fielded in 2010, it was developed in response to losses suffered in 2006 against Hamas. The system was so successful that the US Army procured it for use within armored brigade combat teams. The Trophy system consists of a radar-detection and control suite and a pair of rotating tubes filled with MEFPs (multiple explosively formed penetrators).

Trophy’s radar sensors detect and categorize incoming projectiles. Based on positive threat identification, the system engages the incoming missile with a pinpoint spread of MEFPs. The system can handle simultaneous threats from multiple directions, and selectively engages only those missiles that are on a course that will threaten the vehicle. The precision of the response allows use on vehicles operating in proximity with infantry, negating a traditional drawback of systems like explosive reactive armor and older APSs. Trophy also provides tank commanders with the origin of incoming projectiles. The system displayed a 100-percent success rate in tests and on the battlefield. It has defeated weapons ranging from the RPG-7 and RPG-29 (similar to the US-fielded M3 MAAWS—a Carl Gustaf recoilless rifle) and the Kornet (similar to the TOW missile). Trophy has successfully defeated dozens of missiles in real combat. This system can defeat recoilless rifles, weapons similar to the US-fielded TOW missile, and top-attack missiles like the Javelin—although the TOW 2B Aero variant with Gen 1, Gen 2, and Gen 3a missiles can deploy countermeasures to prevent Trophy from engaging by jamming the radar.

Russia has developed several APSs. The Russian military has installed two systems on a large number of its modern vehicles, including the upgraded T-80M and the T-90 tanks, as well as the BMP-3M infantry fighting vehicle. One of these systems is a “hard-kill” system, designed to use direct force to destroy incoming projectiles. The other is a “soft-kill” system, intended to prevent the accurate targeting of the vehicle.

The Russian hard-kill system, developed in the 1990s, is called Arena (Арена). It consists of a sensor suite that uses radar to detect incoming projectiles and uses an arsenal of twenty-six small explosives. It is designed to defeat the full range of antitank rockets and missiles—from recoilless rifles to fly-over, shoot-down munitions. Its protection extends over a 310-degree arc, protecting everywhere except for a section on the back on the turret. Infantry can operate outside without becoming casualties of the system. This system can defeat the Carl Gustaf and TOW, except for the TOW 2B Aero with Gen 1, Gen 2 and Gen 3a missiles. The Javelin can defeat Arena while in top-attack mode, due to the missile descending from too steep an angle for the system to engage properly.

The 1980s-era Shtora (Штора) system consists of a laser detection system, a laser decoy system, and aerosol smoke-grenade launchers. The system can detect a laser-based targeting system. Shtora deploys countermeasures, dispersing a cloud of forward-looking infrared–blocking smoke. Shtora also activates laser decoys to disrupt laser targeting by providing false signatures. Finally, it gives the tank commander the ability to automatically slew the turret to face the direction of the threat targeting system. This system reduces TOW effectiveness and increases the risk to antitank platforms utilizing them, and necessitates the use of Gen 1, Gen 2, and Gen 3a missiles. Shtora has no effect on Javelins or recoilless rifles. When targeting a vehicle with Shtora, gunners using the ITAS (improved target acquisition system) should never directly laser the tank with the range finder, instead targeting a patch of ground three vehicle lengths away. This will allow the gunner to avoid being detected by Shtora.

The Chinese People’s Liberation Army has also developed an APS, though less is known about it. Called the GL5, it consists of four munition launchers controlled by a central detection suite and computer. It is possible that it does not protect from top-attack strikes, though it would be unwise to assume such a glaring weakness in a modern, untested system. This system would be able to disrupt or destroy recoilless rifle projectiles, but might have difficulty targeting TOW and Javelin missiles.

Infantry units will need new TTPs—tactics, techniques, and procedures—to defeat APS-equipped tanks. Development of these TTPs should begin now, and leaders at the small-unit level—commanders of light infantry companies, for example—should take the initiative to do so. Lacking large-caliber kinetic weapons (such as the sabot round delivered from an M1A2 Abrams), it could prove necessary to reduce the effectiveness of the APS before a kill can be guaranteed. The critical weaknesses of an APS are an upper limit on its ability to handle volume of fire, its vulnerability to degradation by external forces, and the arc of its detection system and countermeasures—each of which should be considered as new TTPs are explored.

The following tactical suggestions derive from the broad framework provided by Army doctrine, including the seven steps of engagement area development and the fundamentals of anti-armor unit deployment.

The first possible tactic is to fire a single missile as soon as the target enters the engagement area. The APS is a complicated system and the friction of war can cause malfunctions due to battlefield effects or simple poor maintenance. A vehicle that has an APS might be defeated through the simple malfunctioning of its unit, and targeting it quickly would aim to induce such a malfunction. A keyhole shot from a fire-and-forget system can minimize the risk the commander would assume while potentially destroying the enemy vehicle. In certain environments it may be possible to engage a vulnerable area not covered by the APS, potentially negating its protection.

If this “trial shot” is not successful, a second tactic is to simultaneously overwhelm the system with multiple missiles. Coordinating multiple antitank teams attacking the same target nearly simultaneously and from different angles is not an easy task. To defeat the Arena system, for example, a commander would have to coordinate multiple missiles arriving from different directions simultaneously. A multidirectional attack could also force the vehicle to expose the rear of the system to one of the antitank teams, enabling their missile to bypass the protection. The Arena has this rear vulnerability, but the Trophy and GL5 do not.

A third tactic is to use indirect fire to damage the system or trigger it to fire. Accurate sustained fire from company 60-millimeter mortars or M320 grenade launchers, or calling for fire from higher echelons, could damage the system while preventing enemy direct-fire weapons from engaging. A well-constructed defense could also use preparatory fires to deteriorate APS capabilities before a tank enters the engagement area to such an extent that the “trial shot” can have a high chance of success.

A fourth tactic is to simply use munitions that are not countered by the APS to engage and damage it. A high-caliber machine gun could fired in an effort to destroy the munition casings or damage the sensors. A rocket could also be fired so that it explodes next to the vehicle instead of being directed at it. An APS might not deem this shot a threat, and a skilled shot—aimed at a nearby wall, for example—could potentially produce enough shrapnel to damage sensors or munition casings and be followed up by a shot that then has a higher probability of success. Direct-fire degradation is a more risky option, but could be planned as a fallback tactic if indirect preparatory fires are not sufficient and the unit is unable to engage with enough simultaneous anti-tank munitions to overwhelm the system.

These are, of course, just suggestions. But they represent a starting point for a critical process of TTP development in infantry units. It is vital for any army to prepare in peace for the changing realities they might encounter in the next war. The US Army has not had to engage peer adversaries with modern APSs. Understanding the potential capabilities of our adversaries and developing techniques to defeat them now will allow us to be more agile when we first come up against them in battle.

Capt. Vincent Delany is an infantry officer who commissioned from West Point in 2013. He served as a mechanized infantry platoon leader in 1-72 AR in Korea, an infantry training company executive officer in 1-50 IN BN at Fort Benning, GA. He currently serves as a multinational planner and OCT (observer controller trainer) for the 196th Training Support Brigade out of Fort Shafter, HI.

Author’s note: I would like to thank Staff Sgt. James Wilson for helping to fill in gaps in my knowledge with information that I could not find through my own research. He was an instructor for the Heavy Weapons Leader Course from 2015 to 2018, where he served as primary instructor for ITAS and Javelin and then as senior inspector and team chief for the course. In his time as an instructor he assisted in the development of the JLTV ITAS carrier, an M-ATV ITAS carrier, and a potential CROW/RWS replacement, and conducted numerous live TOW and Javelin missile ranges with over 150 total missiles fired.