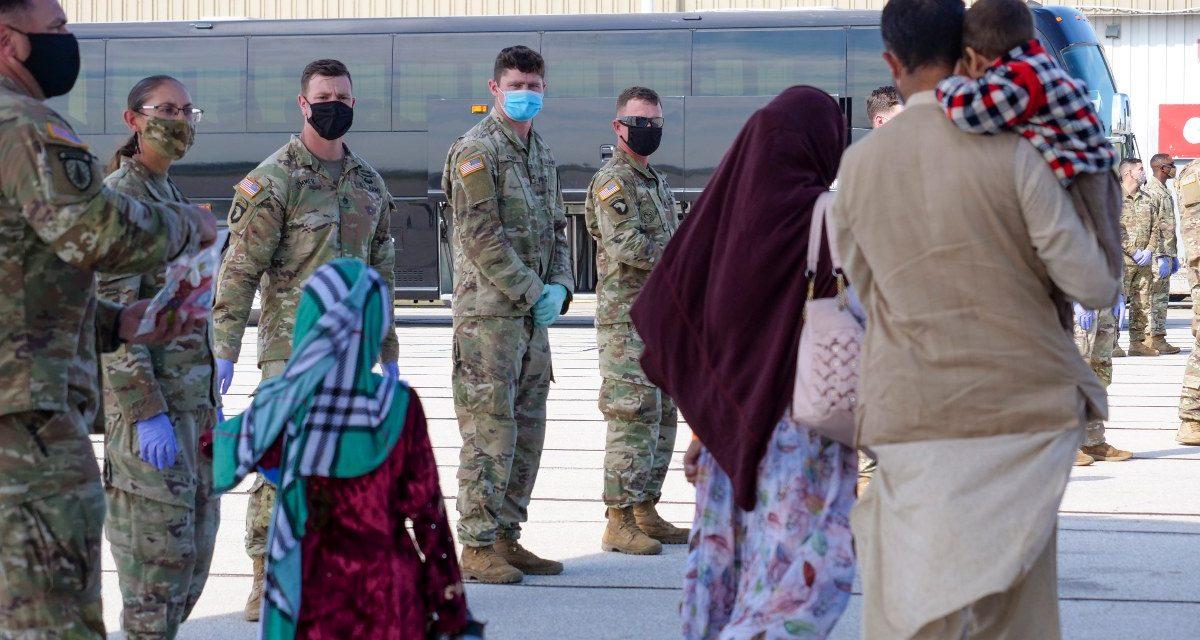 There I was. It was day two of my relief-in-place—I was taking over as the battalion operations officer—when our battalion received a warning order that we might be called upon to support the ongoing Afghan refugee crisis. Less than sixty days later, we were on a plane to Camp Atterbury, Indiana to conduct a mission that is one of the four core competencies of the Army, but one that is rarely executed: defense support of civil authorities, or DSCA. It was a unique and challenging experience, but also a rewarding and developmental one, individually and as a unit.

President Joe Biden’s decision to conduct a large-scale evacuation of US citizens, Special Immigrant Visa holders, and others out of the airport in Kabul, Afghanistan in August 2021 necessitated a similar large-scale operation to integrate that population into American society. A variety of military units from across the country and from all three components of the armed forces—active duty, reserve, and National Guard—participated in what was dubbed Operation Allies Welcome at eight different locations across the continental United States. Our battalion, 2-12 Cavalry, 1st Armored Brigade Combat Team, 1st Cavalry Division, was given the mission to support the operations at Camp Atterbury from October 2021 to January 2022.

In the brief time we had to prepare, the battalion staff focused on analyzing the layout of the camp and determining the best way to array our forces to meet the various missions we would be asked to carry out—all of which were far outside of the missions we routinely trained for. Several weeks before the battalion deployed, I led a team on a site survey to gain a better understanding of how the camp operated. This trip filled critical information gaps and allowed the staff to finalize our plan. Additionally, our battalion intelligence section researched and taught a culture brief to the entire formation, which provided helpful information on the culture and background of the refugees we would be working with.

Immediately upon the battalion’s arrival at Camp Atterbury, we began taking full ownership of the mission from 2-7 Cavalry, 3rd Armored Brigade Combat Team, 1st Cavalry Division, a battalion that had arrived approximately sixty days prior to us. We divided the various barracks buildings into several blocks and assigned company commanders to run five separate mayor’s cells across the camp. These mayor’s cells were responsible for distributing supplies, organizing town hall meetings, disseminating information, and managing appointments and movements of personnel for a wide variety of activities and events on a daily basis. The battalion’s specialty units were assigned specific jobs to assist in the overall management of the camp, all of which fell far outside their mission-essential task lists. The battalion’s mortar platoon, for example, was given the task of running a supply warehouse full of donated goods. They executed daily supply missions to keep the five mayor’s cells stocked with the supplies they requested. The scout platoon was tasked with managing the movement of personnel to and from medical appointments. This included hundreds of appointments each day at the on-camp medical clinic run by a separate task force primarily led by US Navy personnel and a team of contracted medical personnel, but it also included dozens of off-post appointments at specialty clinics in the surrounding area. Approximately sixty-nine thousand vaccinations and over sixty thousand COVID tests were administered to refugees at Camp Atterbury.

In addition to our organic units, the battalion was augmented by an engineer company, which ran one of the mayor’s cells and a dining facility, and a military police company tasked with maintaining order across the camp. Both of these companies came from the Oregon National Guard. To round out our task force, the 576th Movement Control Team from the US Army Reserve was assigned to us and was given the mission to assist with what were categorized as “independent departures,” wherein refugees decided to leave the camp on their own rather than accept the resettlement benefits of a job, housing, and sponsorship. In total, our battalion consisted of a task force of approximately 950 personnel.

We experienced a wide variety of challenges that forced us to continually develop innovative solutions throughout the mission. First, we had to learn how to work under the leadership of the lead federal agency—the Department of Homeland Security—and how to work with the dozens of other governmental agencies, NGOs, and sister services. We implemented a battle rhythm within the task force of daily commander’s update briefs, battle update briefs, and logistics synchs. We attended daily interagency meetings led by Department of Homeland Security personnel that synchronized all federal, NGO, and volunteer efforts across the camp. Additionally, we assigned a liaison officer who worked alongside our interagency partners and handled all requests for military support from other organizations.

Another challenge centered around supply distribution. We benefitted tremendously from the efforts of Team Rubicon, a volunteer organization that managed the intake and warehousing of thousands of donated goods. Our battalion’s mortar platoon worked closely with the volunteer team to sort soccer balls, school supplies, clothing, diapers, baby formula, hygiene items, and a variety of other items. Company executive officers submitted requests for supplies, sometimes identifying specific diaper sizes or clothing items that were needed in their respective blocks, which the mortar platoon later delivered from the warehouse. Throughout the mission our team distributed over 2.6 million donated items and tens of thousands of government-purchased items.

Feeding the 7,200 refugees proved to be a daily challenge. Our task force assisted in crowd control for two dining facilities and six grab-and-go facilities across the camp. Early in the mission the Afghan refugees were highly concerned about having enough food, which resulted in disorganized and chaotic queues and the hoarding of food. Over time, the guests gained confidence that the dining facilities would not run out of food, which reduced the amount of hoarding. Additionally, KBR, the contractor that ran the dining facilities and many of the other services across the camp, implemented a meal card system that greatly improved operations.

Maintaining an accurate count of the population remained an ever-present challenge. Since we were unable to use standard military methods to maintain accountability, such as formations and roll calls, keeping track of thousands of people who were free to wander the camp as they pleased proved to be particularly difficult. The State Department and the Department of Homeland Security ran several different databases that listed the guests housed at the camp, but each system computed slightly different numbers. To remedy this problem, our task force planned and executed a camp-wide census to reverify the camp’s population. Since dozens to hundreds of refugees left the camp for resettlement each day and shuttle buses carried hundreds more to various locations across the camp on a continual basis, gaining an accurate count proved to be a serious and perplexing problem. The solution we developed involved publicizing the date and time of our census several days in advance and issuing instructions for all refugees to remain in their assigned barracks buildings until they could be counted. Additionally, we had to gain the cooperation and consent of all other agencies and NGOs working on the camp to ensure a soccer game, an English class, or a knitting group wouldn’t pull people away from their barracks on the assigned day. On the day of the census over a dozen teams consisting of military and State Department personnel quickly verified each refugee’s identification materials and validated that the camp’s overall population matched the database.

In the approximately ninety days our battalion spent at Camp Atterbury, we assisted in the resettlement of over six thousand Afghan refugees. During the mission we interacted with over ten federal agencies, a half dozen nongovernmental organizations, and the United Nations International Organization for Migration. To be successful, our battalion had to learn and implement a few lessons. First, we had to remain flexible. As a combined arms battalion that normally focuses on shooting gunnery and training for the next National Training Center rotation or combat deployment, we had to implement nonstandard solutions to meet the needs of this unique mission. Military occupational specialties were largely irrelevant since the entire operation fell outside of our normal combat mission. Rather, in several cases we had to adapt by assigning tasks based on individual personality and aptitude.

The second lesson we learned was the importance of remaining patient, exercising tact, and building relationships with partners to achieve a common goal. Liaising closely with interagency partners was essential to our success, and developing relationships was a critical part of that process. On several occasions we encountered civilians who were completely unfamiliar with how military organizations functioned, which forced us to exercise restraint and understanding rather than the take-charge attitude that is often celebrated among members of the military. Assertiveness often proves useful in the missions assigned to the military but can be counterproductive during a DSCA mission requiring collaboration with interagency partners.

Finally, we learned to continuously emphasize cultural sensitivity with our soldiers. While we never experienced a serious incident, we knew that a careless word or gesture from someone in our task force could do great harm to our relationship with the refugees under our care. By providing a detailed culture brief to the entire formation prior to deployment, and by continuing to reinforce those lessons throughout the mission, we never experienced a serious cross-cultural misunderstanding during our time at Camp Atterbury.

Overall, it was an honor to serve in support of Operation Allies Welcome. It was a challenging mission, one that required our battalion’s soldiers to work far outside the bounds of their normal duties and overcome challenges every day. These challenges taught us lessons, making it an experience that contributed to the development of both the battalion and its individual members. More broadly, every soldier I spoke to was glad to be a part of such a historic moment in our history. After two decades of war, the Thunderhorse Battalion proudly served in the final chapter of our nation’s conflict in Afghanistan.

Major Jeb Graydon serves as the executive officer in the 2nd Battalion, 12th Cavalry Regiment, 1st Armored Brigade Combat Team, 1st Cavalry Division at Fort Hood, Texas. Previously, he served as the maneuver program manager at the Office of Security Cooperation–Iraq in the US embassy in Baghdad. He holds a master’s degree in history from the University of North Georgia and a master of military arts and sciences from the US Army Command and General Staff College.