President Trump’s 2019 Defense Budget: Where Does It Really Rank, Historically? 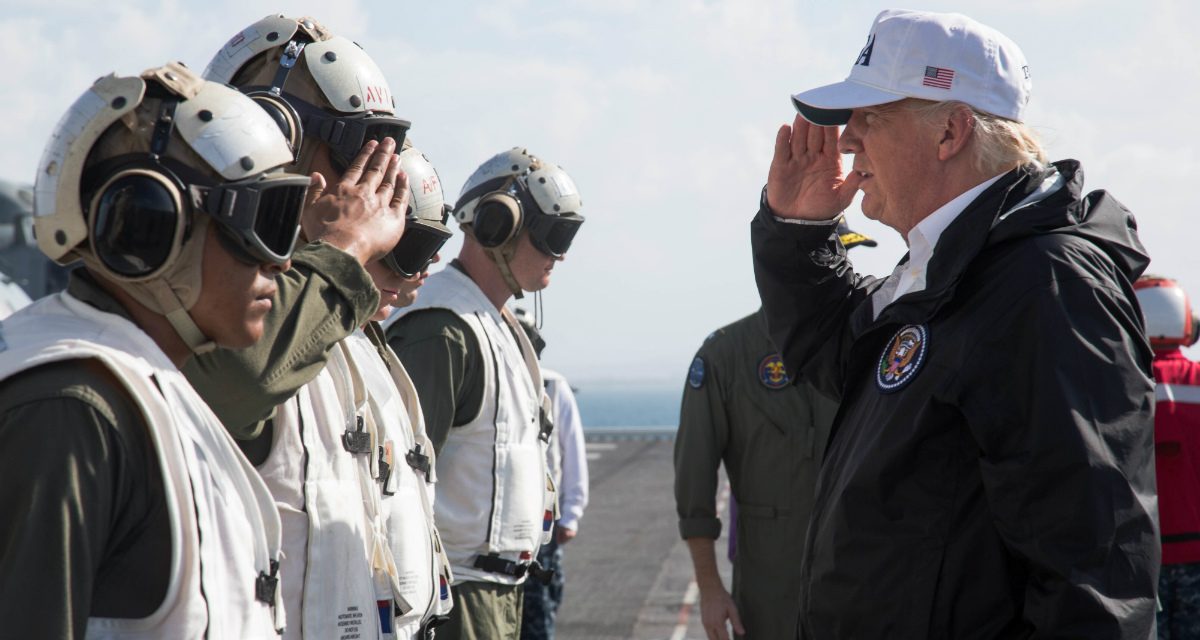 With the White House and Congress having finally agreed to a full-year budget deal last month, following two government shutdowns and endless negotiations, we can now look ahead to the next fiscal year starting in October. The Trump administration’s fiscal year 2019 budget request significantly increases defense spending for the second year running. If approved by Congress, it would provide $686 billion for the Department of Defense’s base budget and overseas contingency operations in Afghanistan, Iraq, and elsewhere. That amounts to a 4.3 percent increase over the 2018 request after adjusting for inflation. Since the 2018 request featured a comparable bump over 2017, the administration’s first two budgets have proposed increasing the defense budget by about 9 percent overall, granting DoD roughly $100 billion in additional funds above the spending level inherited by President Trump. With consecutive years of sizable growth, there is little denying that the Trump administration is officially pursuing a defense buildup.

As with past budgets, the 2019 request exceeds the spending caps established by the 2011 Budget Control Act. It also purposefully redirects funds into the contingency operations account exempt from those caps. Congress voted in February to raise the caps for the next two years, something it had done three times before with temporary waivers, so the 2019 budget faces one less obstacle to becoming law. Leading analysts have asked legitimate questions about whether Trump’s defense buildup is necessary or wise, but for now it appears to have some political momentum.

With two budgets under its belt, the Trump administration has finished half the annual budget requests for its first term. That presents an ideal opportunity to evaluate where the administration stands so far. Since 1950, only Ronald Reagan and George W. Bush achieved higher real growth rates in both of their first two defense budgets than Trump has proposed. Yet those presidents increased military spending under vastly different circumstances. It is not clear whether Reagan’s peacetime buildup or Bush’s wartime buildup represents the right analogy for assessing Trump’s policy, as discussed below.

The Trump administration has not sought the biggest year-on-year defense spending increases ever, but it has embraced the relatively rare policy of requesting consecutive increases early in its tenure. Barring any dramatic policy reversals, the Trump administration is poised to implement one of the steadiest defense buildups since World War II. Yet the budget still will not be big enough to avoid setting strategic priorities, as discussed in the conclusion.

Historical budget comparisons require caution. Due to inflation, pay raises, and unforeseen emergencies, each year’s budget stands a reasonable chance of being the biggest ever in absolute terms. Scientific progress means each budget is probably the most technologically advanced, too. These superlatives do not mean much. Proper assessment requires analyzing defense spending outcomes under circumstances that are as comparable as possible to contrast leaders’ performance. One reasonable approach involves comparing how presidents changed defense spending growth rates in their first two budgets after entering office. In other words, regardless of the budget’s initial size, how did they adjust it once they took control?

Evaluating real growth rates after two years makes sense for two reasons. First, growth rates offer a fairer diagnostic than absolute spending because each new president’s budget begins with whatever their predecessor spent. Since presidents do not all start from the same point, they do not all have the same opportunity to reach historic highs or lows. As a practical matter, not since Truman and Eisenhower’s days has a single president overseen record-breaking swings in absolute spending on their own. Most big spenders, from Reagan to Bush II, have built on the increases initiated by their outgoing predecessors, from Carter to Clinton.

Second, an administration’s second budget may represent a high-water mark for its policy sway. Inadequate time, incomplete staffing, and inescapable campaign promises might prevent the first budget from reflecting the administration’s true ambitions. But the second budget has less excuse. Indeed, the administration might never again exercise as much influence. If the president’s party loses seats in the midterm elections, as often happens, the third budget would face stiffer political opposition. The fourth budget would then arrive amid election-year politicking, with everything depending on the president’s winning reelection in November. Given those political uncertainties, an administration’s second budget offers perhaps its best chance to set the trajectory of US defense policy.

Figure 1 compares the inflation-adjusted growth rates in presidents’ first two defense budgets since 1950. The intervals depicted generally start two fiscal years after presidents are first elected to reflect when they gained control of the budget request. For example, President Trump won election in November 2016 and submitted his first full budget—for fiscal year 2018—six months later. Truman and LBJ complicate this rule because each assumed office after his predecessor died and maintained his predecessor’s policies for some time. In Truman’s case, the interval follows his 1948 election to show how he changed things after winning without FDR on the ballot. With a year-on-year real increase of 142 percent, Truman’s fiscal year 1951 budget, fueled by the Korean War and NSC-68, is literally off the chart. It gives a whole new meaning to “historic” increase. 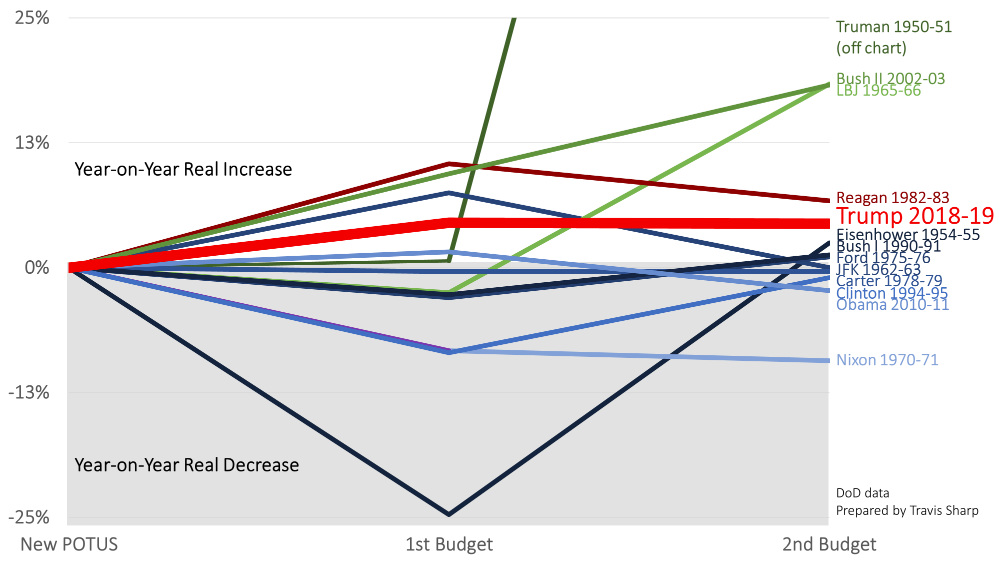 While the intervals span only two years, they reasonably summarize each administration’s approach throughout its entire tenure. In other words, extending the intervals to each administration’s end does not significantly alter the rank ordering on Figure 1’s right side. This fact reconfirms that a president’s second budget generally predicts its long-run trajectory. If extended out, the top group would stay the same (Truman, Bush II, LBJ, Reagan), although Bush II’s Iraq and Afghanistan buildup outpaced LBJ’s and Reagan’s increases. The bottom position would stay the same with Nixon’s Vietnam drawdown. The middle group clustered around 0 percent would reorder itself a bit, but the presidents would remain the same.

Since 1950, only Reagan and Bush II implemented higher real growth rates in both of their first two budgets than Trump has proposed. Kennedy started faster than Trump while fulfilling his campaign pledge to close the alleged “missile gap” with the Soviet Union, but later slowed down. Johnson started slower than Trump but later sped up while escalating the Vietnam War.

Based on Figure 1, we can divide administrations into three categories: buildups with prolonged ground wars (Truman, LBJ, and Bush II); buildups without prolonged ground wars (Reagan); and no buildups (everyone else). The categories provide a typology for understanding what presidents did and what they spent. Eisenhower, for example, maintained a large peacetime military and adopted a nuclear- and Air Force-centric strategy, but he did not implement large defense budget increases. The president who most defies this tripartite schema is Carter. Figure 1 shows him in the “no buildup” category, but he exited office requesting a 9 percent spike in defense funding after the Soviet Union invaded Afghanistan and Reagan turned military preparedness into a campaign issue. By implementing a big defense increase late in his tenure, Carter represents an exception to my rule that an administration’s second budget predicts its long-run trajectory.

Based on his first two budgets, which category does Trump belong in? Many observers have placed him into Reagan’s category reflexively. Like Reagan, Trump is a Republican who has increased the defense budget without fighting a full-scale ground war and while facing increasingly assertive great power rivals, namely China and Russia. Using Reagan’s peacetime buildup as the benchmark, policymakers and analysts have questioned why the Trump administration has not done what Reagan did. For example, Trump’s 2018 budget request did not “move the needle” on weapons systems procurement according to one expert, although the 2019 request increased procurement more than any other part of the budget. In contrast, Reagan’s first two budgets increased procurement spending by 50 percent, funding new generations of aircraft, ships, and ground vehicles to counter Soviet advancements.

However, Trump might fit better in a category alongside Truman, LBJ, and Bush II, or in some hybrid category between them and Reagan. The notion of a “peacetime” buildup does not capture the current operational environment. With nearly 90,000 troops deployed or supporting contingency operations, current requirements bear minimal resemblance to the early 1980s. Then, most foreign-deployed US troops performed peacekeeping in Sinai and Lebanon or garrison duty in Germany, Japan, Korea, and the United Kingdom. Troops faced hardships and made sacrifices, particularly in the horrific 1983 Beirut barracks bombing. But the missions and operational tempo were not like today’s. From 2014 to 2017, US air forces averaged forty-two sorties per day against ISIS targets, plus another eighteen against targets in Afghanistan. In 2016, special operators launched a raid per day in Afghanistan. To support those missions, an elaborate intelligence and targeting enterprise involving thousands of analysts worked around the clock. These activities might not constitute ground war in the traditional sense, but they are probably closer to war than to peace.

The dilemma facing the United States is that both the peacetime and wartime models could plausibly apply today, but the country likely will not pursue both fully—absent another Truman-esque upsurge in defense spending. Even if political leaders mobilized enough resources to pursue both models, optimizing US forces to perform both mission sets equally well would remain exceedingly difficult. That being the case, US policymakers are stuck trying to split the difference by pursuing two buildups for the price of one, an approach that risks sowing dissatisfaction among advocates of one model over the other, sending mixed signals to allies, and underutilizing the State Department and USAID. In 2018, policymakers must decide which threats, missions, and forces merit bigger shares of a bigger pie. The US military cannot do everything, even when the cash is flowing. 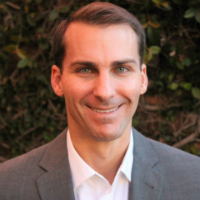 Travis Sharp is an officer in the US Navy Reserve and a PhD candidate in security studies at Princeton University’s Woodrow Wilson School of Public and International Affairs. His current research projects explore military engagement, cyber security, and defense strategy. Previously, he served as a research fellow at the Center for a New American Security and the Center for Arms Control and Non-Proliferation.