From Princesses to Generals: Leia and the Evolution of Women at War 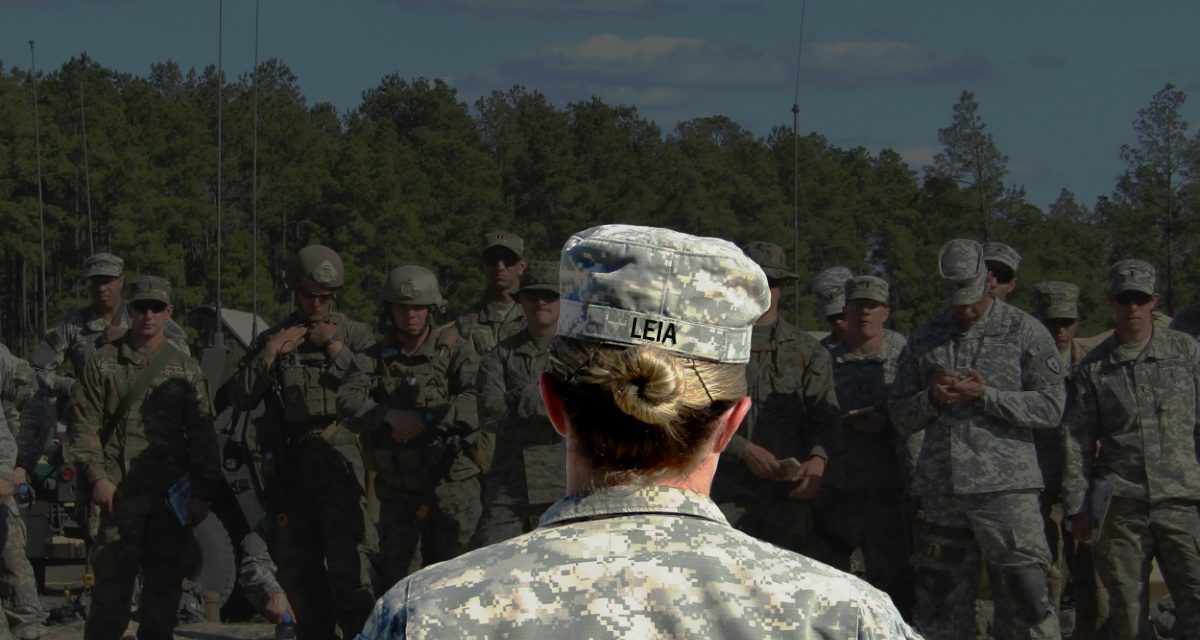 “She wasn’t looking for a knight, she was looking for a sword,” wrote the poet Atticus, who might have been thinking of Star Wars’ Leia Organa. Over the forty years of the Star Wars franchise, Leia went from princess to general at the same time American military women were looking to wield their own weapons.

It wasn’t easy, but both found their swords. And they’re not done fighting.

In 1977’s Star Wars: A New Hope, Leia slipped on-screen as the feisty damsel in distress. At the time, only five of the original ninety-three action figures represented a woman (all were Princess Leia). Female characters were virtually nonexistent, with only 6 percent of that script’s lines. Moreover, in the original trilogy’s total runtime of nearly 400 minutes, female characters other than Leia only spoke about one minute. In this blockbuster and beyond, it seemed like Princess Leia was the lone heroine that exposed global audiences to a female character who fights, shoots, kills, and looks good doing it.

Around the same time, women had just begun making strides for full inclusion in the ranks. In 1977, female Army recruits received letters describing their weapons training, telling them the “intent of the training is not to make a combat soldier out of you (women may not be assigned to combat or direct combat support operations) but to give you confidence.” Women Marines and sailors were similarly limited to non-combat roles, and female cadets had just entered the nation’s service academies in 1976. Those women who endured hazing until graduation in 1980 would be met that year with jokey stereotypes about military women in the movie Private Benjamin.

A major gain, this comes with some salt: the film’s female lead, Rey, had fewer lines than her male supporting character (Finn). The Geena Davis Institute on Gender in Media has also pointed out this gap more generally—that, even with leading women in successful big-budget action franchises and films like Star Wars, The Hunger Games, and Wonder Woman, these movies still routinely feature male characters on screen three times as much as females.

Yet modern Hollywood’s willingness to feature women in powerful leadership and warfighting roles has opened a world of possibilities. Especially in the wake of Meghan Markle’s engagement to Prince Harry, young girls still dream of being princesses—but now their dreams are wider. Reflecting the Geena Davis Institute’s motto: “If she can see it, she can be it,” more than ever, girls envision themselves as Jedi masters, fighter pilots, Rebel soldiers, Storm Troopers or ship captains. We see the results every last day in October; a recent National Retail Federation survey finds superheroes now beat out princesses as Halloween’s top costume as more girls vote for lightsabers over little tiaras.

Today, real women warriors work as hard as their fictional heroic counterparts to shatter glass ceilings. Female soldiers and Marines have joined combat units, including the infantry. In the Navy, submarines are propelled by women submariners. With recent gender combat policy changes, all the service academies are seeing greater female enrollment, with the Coast Guard Academy setting a record high 38 percent of 2016’s incoming class. And Air Force General Lori Robinson is the first woman to serve as a combatant commander, in charge of American homeland defense. Women don’t just train on weapons for confidence anymore.

For this shift in American strategic culture, at least in small part—we have Leia to thank. And it comes just in time.

Rumor has it the too-early death of actor Carrie Fisher means the end of General Leia in Star Wars: The Last Jedi. But even this character’s impending demise is another reminder that women are warriors: they too make the ultimate sacrifice, whether it’s among the stars or right here on Earth.

Military mapspeak includes a term called a “rally point,” a gathering place for rest, refuge, and refit before heading toward higher objectives. At a time when so many women are breaking barriers and painful silences, particularly in the national security community, The Last Jedi should serve as such a rally point to appreciate and consolidate gains, a moment for women (and the men that support and respect them) to come together before continuing the climb to the final objective of full equality.

Leia can also provide us one last word of encouragement. In the closing scene of Star Wars: Rogue One, we saw a youthful Leia look over the stolen plans of the Death Star, and say one word: “Hope.”

Today, young women don’t need to look to fictional characters for inspiration, as there are increasingly enough real-life women Jedi to choose from. They are our new hope.

Lt. Col. Erica Iverson and Maj. ML Cavanaugh are US Army Strategists; this essay was adapted from a chapter in their forthcoming book, co-edited by Max Brooks, Strategy Strikes Back: How Star Wars Explains Modern Military Conflict.