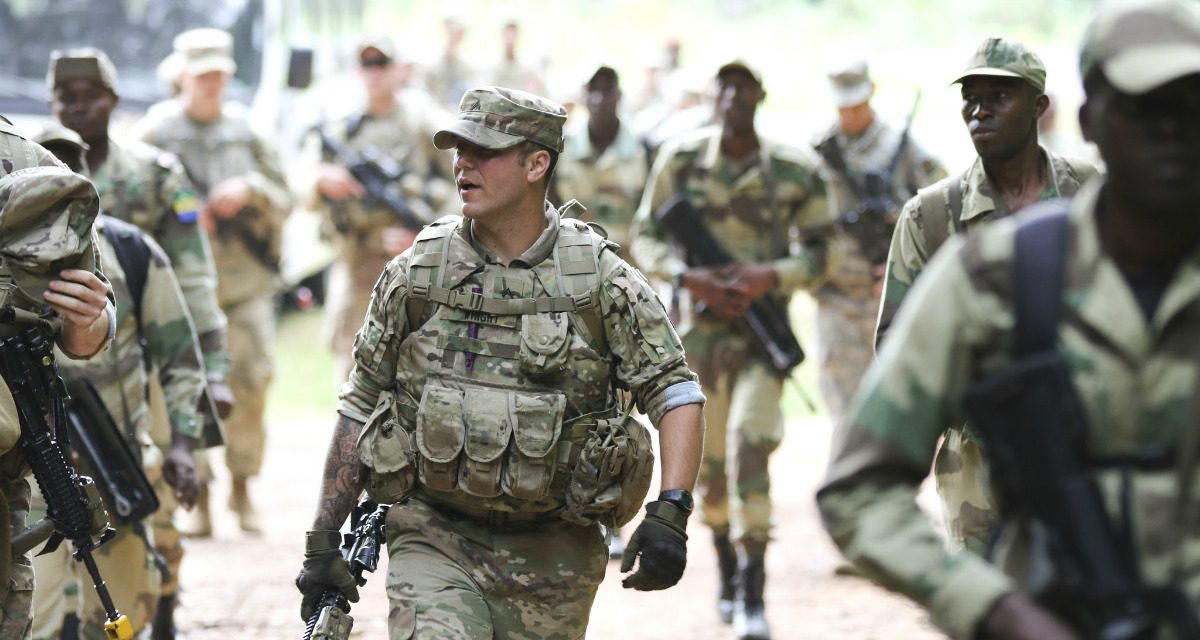 “It’s not forever war,” Army Chief of Staff Gen. Mark Milley recently said of America’s long, post-9/11 conflicts, “it’s forever train and advise.” His comments describe how Army leaders envision the future of US military involvement in places like Afghanistan, Iraq, and elsewhere. They also make clear the need for a professional, institutionalized security force assistance capability. As the Army activates the 1st Security Force Assistance Brigade (SFAB) at Ft. Benning this month—with a looming deployment even as personnel continue to arrive in the organization—several questions need to be addressed to ensure the SFAB survives first contact and proves to be more than a passing mission fad.

With the deployment of the SFAB, the Army is now dedicated to advising under three general constructs. What remains to be seen is how the unique strengths and capabilities of each organization will be leveraged to deepen US relationships with partnered and allied forces, particularly once the conflicts in Iraq and Afghanistan conclude or reduce in scope.

The longest running of these missions is Special Forces’ Foreign Internal Defense (FID), which has evolved to focus almost exclusively on partner-nation counterterrorism and special operations forces as the scope and scale of SF deployments has grown. More recent is the use of rotational brigade combat teams (BCTs) in South Korea, Europe, and Africa to conduct partnered development and combined training as part of the Army’s Regionally Aligned Forces (RAF) concept. Whereas FID missions typically work with SF-like, commando units, the RAF BCTs in South Korea and Europe conduct larger-scale combined maneuver training with conventional forces of allies and partners. In Africa, though, the RAF mission is different: the assigned BCT is divided over more than a dozen countries, with individual tasks ranging from small-team staff advisory efforts to company-level combined security operations.

Where does the new SFAB (and the five additional SFABs scheduled to activate in the coming years) fit into this mix? In the short term, the SFAB role is clear. As the 1st SFAB’s mission statement puts it, the unit “integrates with foreign partner forces, assists and advises local security operations to build partner security capacity and capability and achieve regional security.” Left unsaid in that statement but an important effect is that the SFABs will provide a better, more institutionalized advisory capability than BCTs currently assigned the advisory mission, while freeing up those BCTs’ maneuver forces for other operations. Special Forces’ responsibility for FID likely won’t change anytime soon, nor should it. It is safe to assume RAF will remain a function of the BCT, at least in South Korea and Europe where partners’ maneuver capabilities allow combined training and the mission helps sustain not only advised nations’ readiness, but US readiness, as well. That leaves the RAF mission in Africa, which is generally a consumer rather than a producer of readiness, as the most likely current mission for which the SFABs may be a logical surrogate for the rotating BCT. However, because the SFAB lacks internal security and sustainment capabilities, there will continue to be a bill for the BCTs to support SFAB operations. The RAF, FID, and SFAB missions have the potential to complement one another, but it will require careful planning to ensure mutual support and synchronization.

The SFAB manning structure is identical to that of a Special Forces group, but will the SFABs be given the training time and resources to make them as effective as Special Forces?

One of the chief complaints and limitations about the Military Transition Teams (MiTT) that took on much of the advisory mission in Iraq and Afghanistan was the rush to man, train, and deploy before the members had a chance to develop into coherent and effective teams. Once a MiTT completed a deployment, the team disbanded and members returned to their basic branches, often with minimal lasting gains for the advised unit. The BCTs repurposed as SFABs generally follow the same track—the training mission is a temporary diversion from the units’ primary responsibilities.

In contrast, the effectiveness of the SF advisory capability rests on two features of the SF career field: first, the training and evaluation period lasts up to two years, depending on the group assignment and language requirement; second, once in the SF community, soldiers remain in the SF career management field and generally conduct repeat deployments to the same region or country. This allows the Army to maximize the investment in training, while the repeat deployments ensure the individual’s expertise in language and culture achieves greater depth over time. But, as Gen. Milley has stated, SFABs are not Special Forces.

The current plan for the SFAB seeks a balance. Personnel remain in their basic branches, but receive deeper cultural-awareness and language training over the course of a three-year SFAB assignment. The training is intended to be tailored to the area into which the SFAB is expected to deploy. Since career management is handled similarly to the way it was for MiTT soldiers—advisors remain in and return to a distinct career field—the distinguishing characteristic becomes the added emphasis on cultural and language training. In the event the deployment of the SFAB is accelerated—not an unlikely scenario given the priority of the mission and the SFABs’ “rare commodity” status—that training could end up curtailed or removed. If so, can the SFAB be expected to achieve a higher level of success than its predecessors? Perhaps the quality of the handpicked, high-caliber officers and noncommissioned officers in the SFAB’s ranks could offset the risk of reduced training. That assumption begs the question: Is it sustainable to pull qualified high performers to one area of the Army for an extended period of time? At full strength, six SFABs require just over 3,000 people. Placing the best eggs in one basket will necessarily represent a substantially unequal distribution of talent and an equally substantial assumption of risk.

Is the notion of the SFAB providing the command structure for a full BCT feasible?

In the SFAB’s mission is the requirement to provide the command structure of an infantry (IBCT) or armor BCT (ABCT), should the need arise to grow Army BCT strength rapidly. Going back to how the SFAB is manned—with roughly equal numbers of volunteers and non-volunteers, with varied previous experiences within BCTs, in a structure that more closely models an SF group than a conventional BCT—transitioning an SFAB into a BCT would be a significant challenge.

The top-heavy nature of the SFAB presents some difficulty. The BCT and battalion-level commanders are all serving in second command billets. The majors in staff and company command positions are all senior, having completed their key-developmental positions, and platoon or team-level leaders are all branch-qualified captains. Should the need arise for the SFAB to become a BCT, the transition would either entail an upheaval of leadership or require officers and noncommissioned officers serving in billets one or two positions below the norm for conventional units. There are other considerations as well, such as the adverse effects on professional military education timelines for captains awaiting Intermediate Level Education. These might seem like comparatively minor issues in the context of mission requirements. But if career impacts aren’t managed properly, it could lead to an exodus of some of the top talent that the Army should be working hard to retain.

Manning issues aside, the SFAB’s Mission Essential Task List and equipment set do not mirror any of the three types of BCTs in the Army. The SFABs have rightly sought top talent—not officers and NCOs with homogenous backgrounds. Further, during SFAB assignments, personnel are being trained on a skill set completely unrelated to their core competencies. Even if the personnel in a given SFAB battalion share the same branch or military occupational specialty, their individual skill sets still vary based on the type of BCT experience they have. For instance, the experiences of an armor officer from an IBCT cavalry squadron are not the same as those of an armor officer assigned to an ABCT combined arms battalion.

There are options that could make an SFAB’s transition to a BCT feasible. Perhaps, for instance, the key is using the existing leadership to stand up the formation and receive equipment while the long-term command and staff structure is being developed and relocated. This is certainly not impossible, but the BCT would require the same amount of training time afforded to newly activated BCTs to achieve a deployable level of readiness, often eighteen to twenty-four months. At a minimum, a clear plan must be in place to avoid rendering this aspect of the SFAB’s mission little more than a platitude.

What is the long-term viability of an advisory organization that temporarily draws officers and noncommissioned officers who are trained in a new skill set and must return to the Army to remain competitive in their individual career fields?

This concern has been partially addressed in the discussion of other questions above, a clear sign that the manning challenges underpin many of the others. Managing advisor expertise over the long term merits its own, separate discussion and is arguably the one area that the SFABs absolutely must get right to ensure their viability.

If an ASI is intended to highlight a skill set and demonstrate preparedness for assignments to certain positions or units, what does that mean for members of the SFAB? Is the ASI strictly intended to incentivize assignment to the SFAB, and to showcase the skill set to promotion and command boards? Or will the ASI lead to repeat assignments to SFABs after the first tour of duty? Having personnel with SFAB experience return for repeat tours makes sense—for the SFAB. It might not be so beneficial for soldiers or their career goals, though. Perhaps previous experience will not guarantee a repeat tour, but those with experience who desire to return have an edge on those without. This manning model is prevalent at the Combat Training Centers and at the United States Military Academy.

These are all reasonable questions. In the long run, the way individual officers and noncommissioned officers view SFAB assignments will largely be determined by how comparatively competitive SFAB personnel remain on command selection and promotion boards.

The idea for a modern, dedicated, and professional advisor corps dates back to at least 2007, first proposed on the heels of the release of the Army’s counterinsurgency manual. After more than a decade of advisory missteps in Iraq and Afghanistan since that first proposal, and as the 1st SFAB officially plants a guidon at Ft. Benning this month, big questions remain. By addressing these questions, the 1st SFAB can not just survive first contact during its deployment, but validate a new organizational approach to an enduring mission and become a choice destination for the Army’s best and brightest officers and enlisted leaders.