The Race Is On: Assessing the US-China Artificial Intelligence Competition 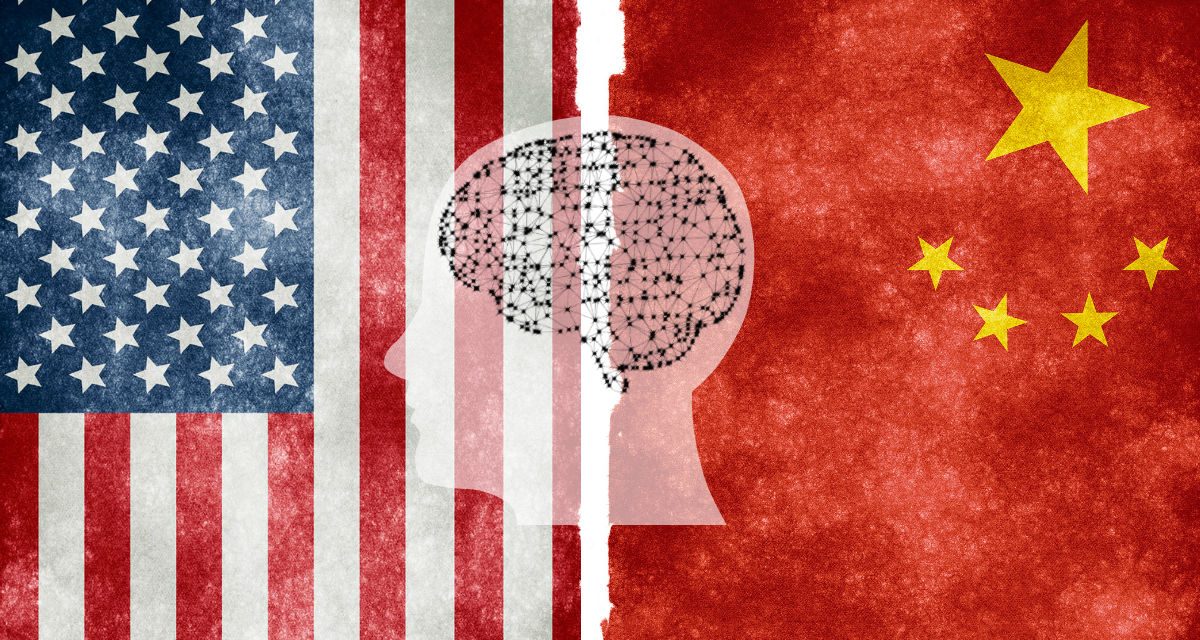 Discussions of artificial intelligence are everywhere. Understandably so: AI has a seemingly limitless range applications, from schools to the battlefield. McKinsey & Company estimated that AI is likely to result in $13 trillion of additional global economic activity by 2030. AI also allows the development of autonomous weapons and novel platforms, such as advanced drone swarms. A revanchist Russia might be the scourge of the Western defense community, but Vladimir Putin has arguably issued the clearest articulation of AI’s massive potential: “Whoever becomes the leader in [AI] will become the ruler of the world.” But how do we assess who is leading?

A simple metaphor proves a powerful tool for thinking about the AI race: the traditional manufacturing process. Applying the analogy to the United States vs. China AI competition illustrates that although the United States is ahead overall, China is positioned to surpass it in the long term. On some measures, China is already winning.

A simple manufacturing process consists of three elements: raw materials, production, and manufactured goods. Raw materials are inputs such as wood, wool, or steel. Production includes the equipment, techniques, and manpower to process the raw materials. Manufactured goods are the final outputs: chairs, guns, and tanks. Likewise, current AI systems typically take large amounts of input data, process it using machine-learning techniques, and output trained algorithms. For example, numerous photos of cars can be processed using machine learning to create an algorithm that recognizes cars in other photos. The government and private sector use those algorithms in applications from autonomous vehicle vision to detecting terrorist activity. (Note: machine learning drives the current AI focus, but technically it is only one form of AI. Other forms are less reliant on data.)

The metaphor highlights two interdependencies in the AI competition. First, outputs depend on inputs. If you want to build a chair, you need wood. An M16 requires steel, aluminum alloy, and composite plastics. Likewise, data on Netflix ratings can lead to better movie recommendations, but is useless for autonomous vehicles. Second, both input volume and production processes determine output volume. If a company has lots of wool, but no looms, it cannot make any rugs. A company with many looms, but no wool, also cannot make any rugs. Likewise, an organization may have sophisticated machine-learning capabilities but lack the data needed to create trained algorithms. Or the organization may have extensive data but lack the capacity to turn it into a useful algorithm.

Applying this framework to the United States vs. China AI competition provides a clear picture of both where that competition stands today and its future trajectory—as well as the consequent policy implications.

Raw materials are the inputs for any manufacturing process. Raw materials vary in type—wood or wool are useful for very different purposes—and states may possess different amounts of each. For example, Australia and Chile produce thousands of times more lithium than the United States. Likewise, raw materials may have different qualities. For example, merino wool is softer than regular wool, adapts to changes in temperatures, and is moisture wicking.

Data is the raw material for most current AI. Datasets are used to train machine-learning algorithms. Data may come in different forms such as audio or imagery data and may capture different types of information (e.g., financial transactions and Netflix ratings). Data may also vary in quality based on the degree to which the data reflects actual behavior. To quote William Bruce Cameron: “Not everything that counts can be counted, and not everything that can be counted counts.”

On this dimension, China has strong structural advantages in data collection. China is the most populated country in the world at 1.38 billion people. China is also one of the most surveilled countries in the world with 176 million security cameras in operation (and expected to grow to 626 million by 2020). While significant for many AI applications, these advantages should not be overstated.

Chinese surveillance and population advantages may support military applications in only limited ways. Chinese surveillance efforts likely focus on highly populated, developed areas, but semi-autonomous and autonomous military vehicles must operate off-road in areas with comparatively limited GPS data and poor terrain mapping. Military autonomous vehicles also must operate in other countries with different environmental features, climate, and building styles. The United States also has advantages in collecting other types of data, such as satellite imagery. The United States has 373 earth observation satellites to China’s 134 (numbers include multi-use and multi-country-operated satellites).

China may also face some data quality challenges because of the country’s political structure. Chinese people may alter their behavior to avoid scrutiny and AI-enforced rules. After a Chinese video game publisher implemented AI-enforced restrictions on minors, underage gamers found a variety of ways of defeat the system, including using photos of sleeping relatives. Those solutions degrade data on who is playing video games and for how long. While video game data is relatively trivial, other data may not be.

The production process turns raw materials into usable products. The process includes equipment, the people who operate them, and the people who invent them. Different production processes require different tools, such as looms for weaving or furnaces for smelting. Each piece of equipment requires unique skills to operate them. And processes are not static; inventors may create better equipment and improved processes, such as Eli Whitney’s invention of the cotton gin and Ransom E. Olds’s creation of the modern assembly line.

The AI production process includes various machine-learning techniques to detect patterns and make predictions from data. Techniques include neural networks and Bayesian belief networks. Data scientists and programmers use those techniques and powerful computers to develop trained algorithms and incorporate them into other systems. Innovators like Allen Newell develop novel techniques, advanced computers, and other technical innovations. Unlike the traditional production process, AI production leaves the raw material intact and certain AI processes may not require raw material.

The United States has better equipment inventors. The strength of the US university system offers strong advantages in developing novel AI tools and creating the best AI talent. Of the top one hundred universities worldwide, forty-one are in the United States and only three are in China. Unsurprisingly, most of the top AI researchers are in the United States. In the long run, novel systems may reduce implementer need or at least require retraining talent.

But China potentially has more equipment users. Inventing a novel technique may require genius; employing it may not. Even novice carpenters can make chairs. The United States currently has a larger AI talent pool, but China’s larger population and major investments in AI training programs give it the potential to surpass the United States.

The manufacturing process outputs chairs, guns, tanks and other goods. Some goods only have military uses, while others have broad applications. The outputs for AI are the trained algorithms and supporting programs that can improve marketing strategies, inform intelligence analysis, aid object detection in autonomous systems, and enhance decision making. Some applications are also restricted to military uses, some only have civilian uses, and some are useful for both military and civilian populations.

The huge scope of AI applications makes direct comparison between the United States and China difficult, if not impossible. But some observations can be made.

China and the United States have some different areas of emphasis. China uses AI extensively for domestic surveillance owing to the heavy emphasis on internal security. The United States is also interested in AI facial recognition, but not to the same degree. Different focus areas mean high-level metrics of investment and research output cannot be compared at face value.

The United States faces challenges in leveraging its advanced AI capabilities for military goods. The US military faces resistance from major tech companies, including Google and Microsoft, over military-relevant AI work. Public-private friction in the United States is important because the private sector drives the latest innovations in AI. The close ties between the Chinese private sector and the government mean China does not face the same challenges.

Investment and organization management cross the manufacturing process. Investments may support multiple activities from improving material extraction to acquiring new production equipment. Organizations at different points in the process face many of the same challenges and national policies shape their development.

China has advantages in state-level organization. Since 2015 China has viewed AI as a national priority. The country recently issued a New Generation Artificial Intelligence Development Plan to lead global AI by 2030. By contrast, the United States established an American AI Initiative only in February 2019, and the initiative stops short of an overall national strategy.

The United States nonetheless has advantages at firm-level organization. Most of the top management consulting firms in the world reside in the United States from McKinsey & Company to Boston Consulting Group. The United States is also adept at developing innovative defense organizations: the Defense Advanced Research Projects Agency is a model for defense research from Germany to Russia. Innovative firms require flat organizations and high tolerance for criticism that China may have difficulty replicating due to a highly hierarchical business culture.

Build more, better looms: The United States should increase its support for research in quantum computing and building new supercomputers. Improved data-processing capabilities would allow the United States to better convert data to a usable product. The United States should especially leverage its comparative advantage in organizational innovation to support and encourage the work of organizations like the Defense Advance Research Projects Agency, as well as innovative American firms working on AI. Success will likely require a serious communications effort to improve perceptions of the military in Silicon Valley and new efforts to draw in top talent. That may require hard choices to open up the military culture.

Train the customer: The United States should support investigation and dissemination of best practices in implementing AI systems. If you were handed a t-shirt, you would not put your leg through an armhole. But that’s not the case for AI. A recent McKinsey study noted: “Survey respondents report the rapid adoption of AI and expect only a minimal effect on head count. Yet few companies have in place the foundational building blocks that enable AI to generate value at scale.” Defense organizations especially should be better prepared for realizing the value of AI. Among other things, the military must address the serious issues with information technology acquisition.

Excite the system: The United States should explore ways to improve the overall AI system. The United States government could adopt policies to support AI venture capital, increase government investment and support for AI businesses, and encourage development of AI talent. The government could also encourage public enthusiasm for AI and robotics. For example, it could hold AI circuses: public displays of advanced robotics with representatives from AI-related university programs, companies, and government organizations.

Manufacturing AI requires extracting more data, processing it effectively, and ensuring the process leads to desired goods. The United States is better at building AI, but China may soon surpass it. New energy is needed.

Zachary Kallenborn is an independent national security researcher / analyst, specializing in CBRN weapons, CBRN terrorism, drone swarms, and emerging technology. His work has appeared in the Nonproliferation Review, Studies in Conflict and Terrorism, War on the Rocks, the Modern War Institute at West Point, and other outlets.