Requiem for the Afghan “Fabergé Egg” Army: Why Did It Crack So Quickly? 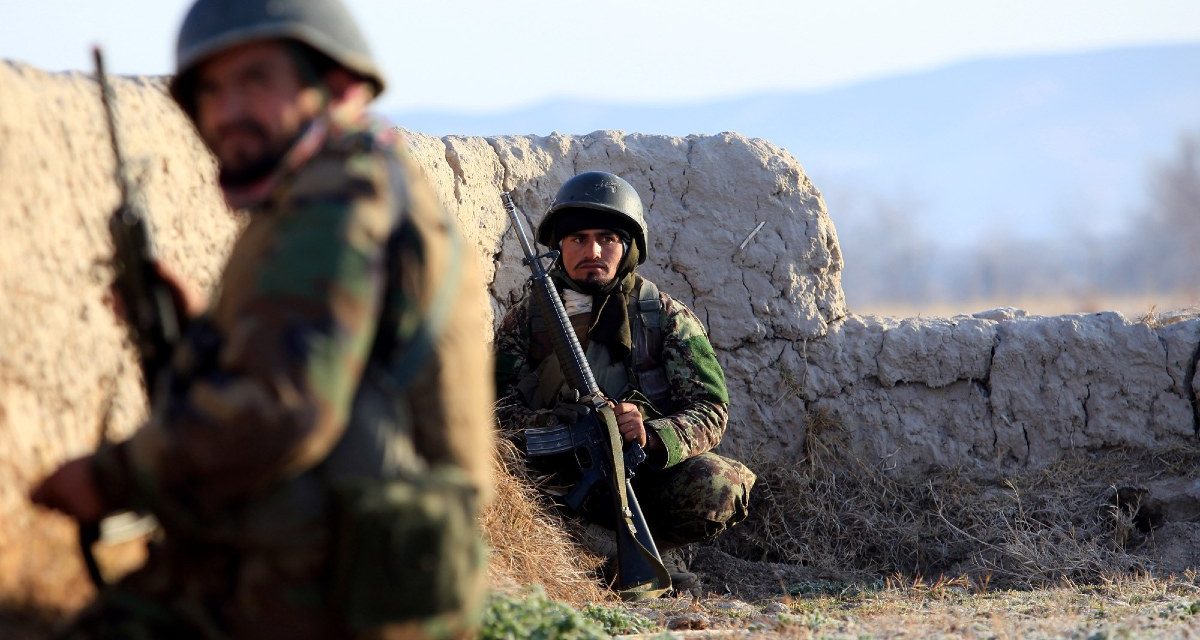 Over the course of two decades and at a price tag of over $88 billion, the United States and its NATO partners built a modern and well-equipped Afghan military—one that, like a Fabergé egg, boasted a glossy exterior but shattered under stress after US military advisors departed.

Confronted by a smaller, technologically outmatched military, the Afghan National Defense and Security Forces (ANDSF) rapidly disintegrated, in most cases avoiding major battles and negotiating their surrenders to Taliban commanders instead of fighting. Within weeks of the US withdrawal, the Taliban had seized the majority of Afghanistan’s provincial capitals with little to no bloodshed.

If the United States ever wants to build a partner military again, it had better learn the lessons of Afghanistan—and overhaul how it plans and implements US security assistance programs.

The Costs of Corruption

In the weeks since the ANDSF collapsed, it has become commonplace to blame corruption. But after interviewing over fifty military advisors since 2017, my research suggests that simply labeling a partner military as corrupt ignores structural and cultural realities, as well as the nuances of patronage politics. For instance, an Ethiopian minister joked with me in 2017 that the “Somalis don’t have a word for corruption,” implying that corruption is normalized into the political logic of any interaction in that society. Afghanistan was no different in 2013, as described by one sociologist. When he asked Americans to define corruption, their answers were typically along the lines of “when you give your cousin a job.” When he went to Afghanistan and asked Afghans the same question, the response was very different: “That’s when you have a job to give and you don’t give it to your cousin.”

In many cases, troops in such settings do not receive the pay or rations promised by their leadership; in response, many exercise their agency and find innovative ways of making up lost pay just to care for their families, as in the case of Afghan military personnel selling their equipment or renting it out to the Taliban. As Mobutu Sese Seko, Congo’s dictator for three decades, said, when explaining why he didn’t pay his soldiers: “You have guns. You don’t need a salary.” In other words, it is difficult to expect a soldier to act professionally in a state that does not treat its own people or army in a professional way.

To obtain jobs and promotions in the ANDSF generally required bribes and personal connections. Even as late as 2020, the ANDSF did not have the basics of personnel systems and the lack of administrative capabilities meant that Afghan personnel received no annual assessment. High performers had no way of moving up the ranks in a meritocratic way because there was no tracking of performance, which merely reinforced the patronage system of the Afghan military. The problem of “ghost troops” in the ANDSF was only finally addressed in 2019 through the use of biometric verification. And the high level of politicization meant the system in general was less focused on military effectiveness and more on patronage. Several Afghan troops I interviewed about how they received promotions and better jobs would respond with the simple hand gesture for money.

The Afghan government, meanwhile, felt threatened by the development of a professional military. When it came to stationing Afghan forces, most were placed in provinces away from their homes and families, as an ad hoc way of coup-proofing against any attempt by Afghan troops to ally with local warlords and militias and turn on Kabul. Moreover, the Afghan leadership in Kabul believed it would be easier to use ANDSF personnel to fight locals with whom they felt no kinship. But this tactic led to high desertion rates of Afghan troops who wanted to be with their families.

What’s more, the average Afghan soldier was not safe at home. An Afghan lieutenant told me that one of his maintenance NCOs had recently quit because the Taliban had made him an “offer” he could not refuse: leave the Afghan army and make twice his military pay maintaining vehicles at the Taliban motor pool, and his family would be allowed to live. Unfortunately, many Afghans did not get this sort of offer. Many US-trained Afghan pilots were assassinated because the Taliban knew it could not mass large forces for conventional assaults without the risk of airstrikes. It should have been no surprise that by 2017, many Afghan military trainees in the United States went AWOL or fled to Canada seeking asylum because they did not feel safe returning to Afghanistan.

Of course, some Afghan units proved highly capable—in particular the Air Force and special operations commando battalions, or kandaks. But over time, the Afghan military became too dependent on these units. Overreliance on the special operations kandaks was becoming obvious by 2016 as the Taliban’s own elite units, known as the Red Group (Sara Khitta), were handily defeating the Afghan army in assaults, including, by 2019, the commandos (even with American airpower at their disposal). The problem with creating a foreign military with an “enclave” of military competence and effectiveness is that it ends up becoming isolated from the politics of the corrupt state—it becomes an appendage of a foreign donor. Thus, while the United States created a highly effective commando force in Afghanistan, none of this translated into the country’s regular security forces, creating an island of competence in a sea of corruption and unprofessionalism.

Corruption wasn’t the only flaw of the Afghan military. The United States and its allies compounded the ANDSF’s problems by imposing an unaffordable, unsustainable model. Congress, for example, planned to supply the Afghan military with 159 UH-60 Black Hawk helicopters instead of providing Mi-17 helicopters, which Afghan pilots and maintainers preferred. In July 2021, the United States and NATO pledged to pay the requisite $4 billion a year to keep Afghan security forces afloat, knowing full well that the government—with just over $2 billion in annual revenues—could not afford to pay the estimated 200,000–350,000 military and security personnel.

When the February 2020 US-Taliban peace deal was signed, the decision required the withdrawal of US and coalition forces from Afghanistan by May 2021. Unfortunately, the biggest oversight was Afghan dependence on contractors. Much of the equipment the United States had supplied, especially aircraft, required foreign contractors to provide most of the logistics and maintenance. But in my interviews with contractors, none of them were willing to work at Afghan bases unless uniformed NATO personnel were protecting them. Additionally, Western advisors would often joke that the fastest way to make money in the Afghan military was by doing logistics: Afghan logisticians would improvise ways to take a cut of any supplies going to a forward operating base. This led Afghan troops to complain they were not getting the weekly protein they had been promised because Afghan logisticians would provide beans instead of meat, or worse, take out a portion of the promised meat and add in dirt so the proper weight was delivered. The problem was so bad in 2020 that any fuels that went through an Afghan intermediary had to be tested for purity to ensure they would not damage military vehicles and aircraft.

Western advisors, meanwhile, often didn’t trust the Afghan troops they were training. Unlike in Iraq, where Iraqi security forces rarely attacked US and coalition advisors, the green-on-blue problem in Afghanistan hobbled US and coalition forces. By 2017, 157 US and coalition personnel and 557 ANDSF members had been killed by insider attacks, driving already risk-averse Western military forces to take extra precautions in their dealings with Afghan troops. For instance, most advisors were assigned “guardian” personnel to act as security overwatch when training the ANDSF. The consequences of this distrust deepened during the COVID-19 pandemic, when virtual advising replaced almost all face-to-face advising. Some advisors admitted to me that they knew their Afghan partners were deviating from rules and procedures and only “behaved” during these video calls.

The collapse of the Afghan military should prompt hard questions for scholars and policymakers alike. Current scholarship, for example, argues that a larger security force assistance footprint may facilitate greater partner force effectiveness. Yet two decades of massive presence by US and allied forces in Afghanistan did not translate into a willingness on the part of the Afghan military to fight. Other scholarship, meanwhile, has tied ethnic inequality to higher rates of desertion and weaker battlefield performance. But the ANDSF were more ethnically diverse and inclusive than the all-male, primarily Pashtun Taliban (although initial reports following the group’s takeover of the country suggest that the Taliban won over some minorities in the north). Researchers need to think harder about warfighting cohesiveness and how to train and advise military units in a fragile state with a weak national identity and endemic low morale.

US policymakers, for their part, now have an opportunity to use this crisis to reform how they build partner militaries. From 2001 to 2020, the US government spent over $344 billion in foreign military aid; congressional and military leaders would do well to ask tough questions about security assistance programs.

They should begin by creating a functional combatant command dedicated to security assistance and cooperation with foreign militaries. This would ensure advising is treated as a pillar of influence in an era of strategic competition.

Just as important is developing dedicated advising jobs across the joint force, whereby an individual can rise in the ranks of the advising career field. Rewarding effective advisors, in a job that requires multiple deployments and high levels of linguistic and cultural understanding, should be a career path allowing those who excel to make it to the highest enlisted and officer ranks in the advisor career field.

The next time the United States decides to build a foreign army, success will largely depend on avoiding the issues that afflicted the Afghan military. But in places like Mali and Somalia, armies built by Western forces exhibit many similar tendencies. Without serious reform, the United States will continue building expensive militaries—ones whose viability is only surface deep, contingent on advisors babysitting partner forces indefinitely.

Jahara “FRANKY” Matisek (@JaharaMatisek) is fellows director for the Irregular Warfare Initiative. He is an active duty US Air Force officer and senior pilot serving as associate professor in the Military and Strategic Studies Department, senior fellow for the Homeland Defense Institute at the US Air Force Academy, and a US Department of Defense Minerva-funded researcher studying security assistance programs. This article was supported by the Air Force Office of Scientific Research under award number FA9550-20-1-0277.