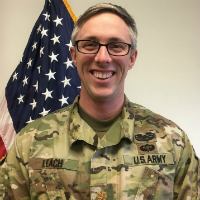 Maj. Ryan Leach is an instructor of Defense and Strategic Studies at the US Military Academy. Prior to his assignment to West Point, Ryan earned his Master of Arts in Military History from Texas A&M University. He also holds a Master of Arts in Intelligence Studies from American Military University, a Graduate Certificate in International Relations from the Bush School of Government and Public Service, and a Bachelor of Science in History from Eastern Michigan University. Ryan has served as a company commander, brigade intelligence officer, civil-military operations officer, assistant operations officer, and platoon leader. He has deployed twice in support of operations Iraqi Freedom and Enduring Freedom.