Rethinking Atlantic Resolve: An Alternative Model for Deterrence in Europe 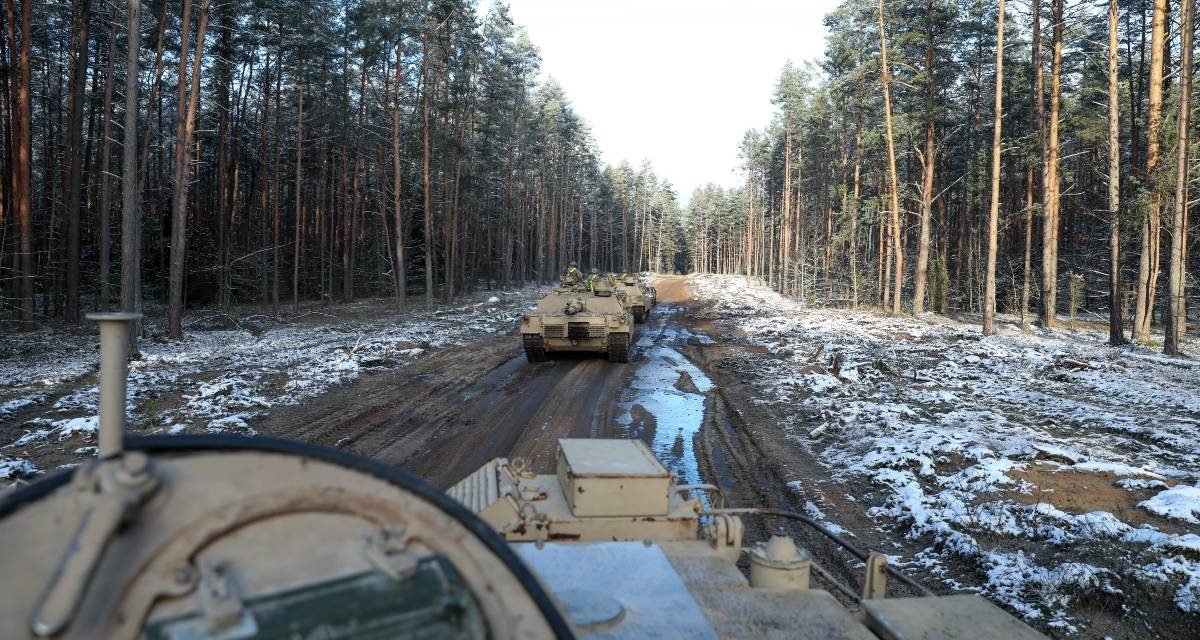 Since 2014, the United States Army has led a series of activities in Europe in response to the Russian incursion into the Donbas region of Ukraine and their illegal seizure of Crimea. Operation Atlantic Resolve is an ongoing series of nine-month training events designed to reassure North Atlantic Treaty allies, such as Poland, Romania, and Lithuania, as well deter future Russian aggression. As Russia continues to undermine regional stability and pose a threat to US interests in Europe, it’s worth questioning the efficacy of these rotational deployments and exploring whether or not European security could be improved by altering the format of Atlantic Resolve or using a different approach altogether. The recent use of Emergency Deployment Readiness Exercises (EDRE) could provide Army leaders with one framework with which they might restructure NATO training deployments and, more broadly, global training opportunities that achieve deterrence in an era of renewed great power competition.

The paradox of Atlantic Resolve is that, while units deploy in the name of preventing future aggression, rotational forces are not postured to defeat a hostile force in the event of a new crisis in Eastern or Central Europe. The armored brigade combat teams (ABCTs) assigned to Atlantic Resolve are not integrated as part of NATO’s Enhanced Forward Presence, a forward positioning of NATO assets in Poland and the Baltic states, nor are they maneuverable forces controlled by US European Command (EUCOM). According to a well-circulated 2014 RAND study, if positioned correctly, it would take Russian forces less than three days to reach the capitals of Estonia and Latvia. Atlantic Resolve allocates only one heavy ABCT to EUCOM, well short of the RAND study’s conclusion that at least three armored brigades would be needed in case of an attack. Finally, the rotational units are not regularly supported by air assets or long-range artillery and, unlike Army forces in South Korea, are not positioned to “fight tonight.” The fact is that these rotations are substantially more effective at one of their purposes, reassuring anxious allies, than their other purpose, deterring future Russian adventurism. ABCTs sent to Europe are dispersed between multiple countries as opposed to being consolidated in a conventional posture capable of overcoming or slowing down a Russian surge. While spreading battalions across the eastern front of NATO may reassure multiple partners, Army leaders should consider whether consolidating an ABCT in a country such as Poland, while still retaining the flexibility for battalions to execute training in other countries, would be a better way of achieving some of the RAND study’s recommendations to harden the Army’s posture on the continent.

The use of Emergency Deployment Readiness Exercises (EDREs) is another step Army leaders could take toward restructuring deterrence in EUCOM. As recently as July 2020, 2nd Battalion, 12th Cavalry Regiment successfully performed a six-week EDRE, deploying from its home station at Fort Hood, Texas to Poland to execute a battalion gunnery density. One of the greatest advantages of EDRE events is the use of pre-positioned equipment in Europe, thereby eliminating the time and cost associated with transporting a large number of combat platforms. Most notably, the 2-12 CAV EDRE featured the combination of a rapid, event-focused deployment with joint and multinational exercises, in this case the Defender-Europe event, during which the United States intended to deploy twenty thousand soldiers and thousands of vehicles to the continent in a massive show of force. The Defender-Europe 2020 event was modified because of the worldwide COVID-19 pandemic, but hopefully this training event will occur uninhibited by COVID-19 in 2021. If so, EDREs integrated into major training events and exercises could become a possible successor to the Atlantic Resolve rotations. These “EDRE+” missions would be shorter than the typical nine-month rotations and achieve deterrence by demonstrating rapid deployability, drawing of pre-positioned stock, massing of combat power, strengthening of logistic supply lines, and execution of mission essential tasks in a scenario designed to react a near-peer military threat with asymmetric capabilities. The intended outcome of an EDRE+ mission would be the strengthening of the transatlantic alliance through quality displays of training and cooperation that would deter Russia and serve the military-diplomatic goal of building public support throughout NATO member states, hopefully spurring all countries to meet the goal of spending 2 percent GDP on defense.

One of the most overstated expectations in the ABCT world is the prediction that the Army will soon establish a permanent presence in Poland, a country that has hosted US forces since the beginning of Atlantic Resolve in 2014 and offered $2 billion toward creating a new US base. There are several reasons why changing the format of Atlantic Resolve or implementing an EDRE+ should be tested before another permanent Army presence in Europe is established. First, NATO countries should be challenged to carry the greatest burden in defending Europe’s security interests. This means holding out on creating another brick-and-mortar US presence in an effort to garner more leadership and investment toward the Russian problem set from within NATO member states. Second, Army leaders should consider how an additional, permanent requirement—after nearly twenty years of war in the Middle East and South Asia and regular training rotations to Europe, South Korea, and Kuwait—will draw valuable resources away from rebuilding and reoutfitting the force to respond to the military challenge posed by a rising China. Finally, at a time when both the US public and policymakers favor a reduction in overseas obligations, Army leaders must conduct a deliberate assessment of how best to project power, build influence within regional alliances and military-to-military partnerships, and achieve deterrence while straining to avoid new long-term commitments of permanent Army units. Such an assessment would likely point to the introduction of an EDRE+ format as representative of the more balanced strategies available.

No matter how Atlantic Resolve is reformed, the logistical supply lines that deliver equipment, parts, and living essentials must be strengthened to facilitate NATO training events across Central and Eastern Europe. ABCTs sent to Europe consistently spend too much of their rotation working to establish basic systems and processes that should already be in place after six-plus years of conducting Atlantic Resolve events. With better military infrastructure, innovative training events such as EDRE+ are made more possible and NATO itself will pose more of a deterrent against aggression. If the EDRE+ concept can be successfully implemented in Europe, Army leaders should consider replicating this deterrence strategy in other theaters of operation. One could easily envision an “EDRE+” mission to Colombia in US Southern Command to increase interoperability with partner forces, for example. Likewise, as the threat posed by a more aggressive China increases, EDRE+ missions could be executed throughout the US Indo-Pacific Command area of operations, including South Korea, Japan, Australia, and the Philippines.

Due to Russia’s recent hostilities toward the United States, some Army leaders are reverting back to a Cold War frame of mind, envisioning a new “Red Dawn” in which Atlantic Resolve rotational units will confront Russian forces in a third-party state, such as Belarus. This view is a distortion of Russia’s strategic objectives, which include re-establishing influence in post-Soviet countries on its periphery, as well as an overreaction to the 2014 incursion into Ukraine, which was motivated less by blind aggressive impulse than a desire to prevent what Moscow perceives as a long-time ally from being co-opted by the European political and security institutions that the Kremlin despises. The concern for NATO and the United States is that Moscow has supplemented its regional adventurism with a hybrid campaign of disinformation, election meddling, and cyberattacks to weaken competitors, undermine US influence, and fracture the NATO alliance in order to re-create a strategically attractive buffer zone in its near abroad, behind which Russia will feel safer and more secure. Russia’s revisionist foreign policy, including its violations of NATO airspace and noncompliance with the Intermediate-Range Nuclear Forces Treaty, necessitate a strong NATO deterrent, but not at the expense of other US security challenges, such as China. Unlike the Army of the Cold War, today the Army does not have the advantage of preparing for a solitary, well-known security threat. The current risk is one of underestimating total Russian capabilities and fixating solely on its military capability, giving in to the temptation to overcommit military resources in order to deter a conventional war in Europe.

As the seventh anniversary of the start of the Atlantic Resolve mission approaches, the Army is in critical need of a reformed approach in which EUCOM rotations designed to reassure are converted into missions that achieve real deterrence without the overcommitment of forces to one regional problem set. The challenge posed by Russia demands that Army units, in equal conjunction with their NATO allies, regularly demonstrate the capacity to integrate with one another, surge forward, and effectively show what winning against a near-peer military in both the hybrid space and conventional combat actually looks like. The prevention of war in this new age of global competition cannot be achieved without the development of innovative concepts for multinational training events that consistently convince regional adversaries to avoid conflict by reinforcing the collective ability of the United States to “deploy, fight, and win” with allies and partners, in all domains of land operations, anywhere in the world.

1st Lt. Stephen J. Greenway is currently deployed with the 1st Armored Brigade Combat Team, 1st Cavalry Division. An infantry officer, he previously served as an infantry platoon leader and a tank company executive officer. He has deployed to Poland, Lithuania, and Georgia. He studied international affairs at the University of Georgia School of Public and International Affairs.