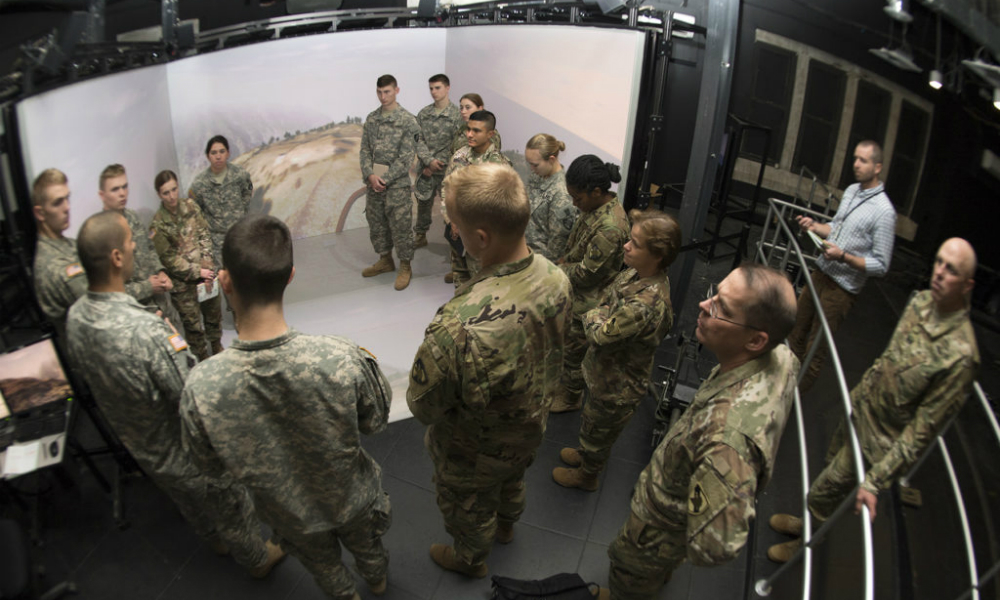 Battlefield assessments form a staple of military training. Visit a historical battlefield, visualize friendly and enemy troop placement, assess the terrain, and evaluate the decisions of the battle’s commanders. Any US Army officer will be familiar with staff rides designed for this purpose. But what about battlefields from contemporary wars? These pose an obvious problem. The same factor that makes them invaluable for preparing to fight and win modern wars—their current relevance—also makes them impractical, or outright impossible, to visit. Antietam is easy to get to, but the Civil War battle there looks little like those most prominent in today’s wars; Mosul is highly relevant, but in an entirely non-permissive environment.

Enter the CAVE Automatic Virtual Environment, better known simply as the CAVE. This immersive, virtual reality system makes visiting these contemporary battlefields possible. One of these systems belongs to the Department of Military Instruction at West Point, and its capabilities were on display on November 1, when the Modern War Institute’s Capt. Jake Miraldi walked a group of cadets and the commandant of the Corps of Cadets, Brig. Gen. Diana Holland, through the Battle of COP Keating.

On October 3, 2009, a group of several hundred Taliban fighters attacked COP Keating, a combat outpost in eastern Afghanistan’s Nuristan province. Shortly after, Miraldi, then a first lieutenant and platoon leader, was dispatched with his platoon as the quick reaction force (QRF) to reinforce the beleaguered COP’s small force. Because the CAVE system is able to display detailed, visual representations of physical terrain, Miraldi was able to virtually bring the group into his platoon’s operation.

Miraldi and the QRF were flown by helicopter to OP Fritsche, an observation post two kilometers away from COP Keating. Rugged terrain that restricted the platoon’s movements and Taliban fighting positions along the approach to the COP meant that it took five and a half hours for the platoon to cover these two kilometers.

The CAVE system allowed Miraldi to highlight the specific challenges for his platoon’s movement to its objective. He pointed to the terrain features that canalized the QRF’s movements. He indicated specific locations where they encountered entrenched Taliban defensive positions. He showed the switchbacks on the single approach route from OP Fritsche to COP Keating, which they anticipated as the most likely places they might encounter Taliban ambushes.

“A system like the CAVE gives instructors the ability to contextualize military lessons in a way that isn’t possible with simple classroom instruction,” Miraldi explains. “Instead of relying solely on a written account or presentation about the attack on COP Keating, the CAVE provides the learner with something much more experiential—something that allows them to stand on the same ground, see the same things, and, if used effectively, feel some of the same emotions as the men and women who those stories are about did. It is the experience that sticks with people.”

As a training tool, the CAVE system serves a similar purpose as tours of historical battlefields, with one major difference: it allows officers to engage with scenarios much more consistent with the features of modern war. It makes it possible to visualize the battle from the perspective of COP Keating’s defenders. Users can plan how to best use mortars to provide indirect fire support to friendly forces with imperfect information about their disposition within the COP. Everything down to decisions over the placement of individual fire teams can be examined, with the considerations that drive those decisions re-created visually. And users’ engagement with these considerations all takes place in a dynamic visual environment that can either replicate the perspective of individual decision-makers or zoom out to provide a more comprehensive depiction of the battlespace.

“Through the experience the CAVE provides cadets not only apply military techniques and procedures using some real-world context,” Miraldi explains, “but just as importantly, they can reflect on how they would make decisions, or how they would solve the military problem, in a much deeper way, in a way that they will remember when they are leading soldiers in the future.”

The CAVE system at West Point is part of the Department of Military Instruction’s Simulation Center.