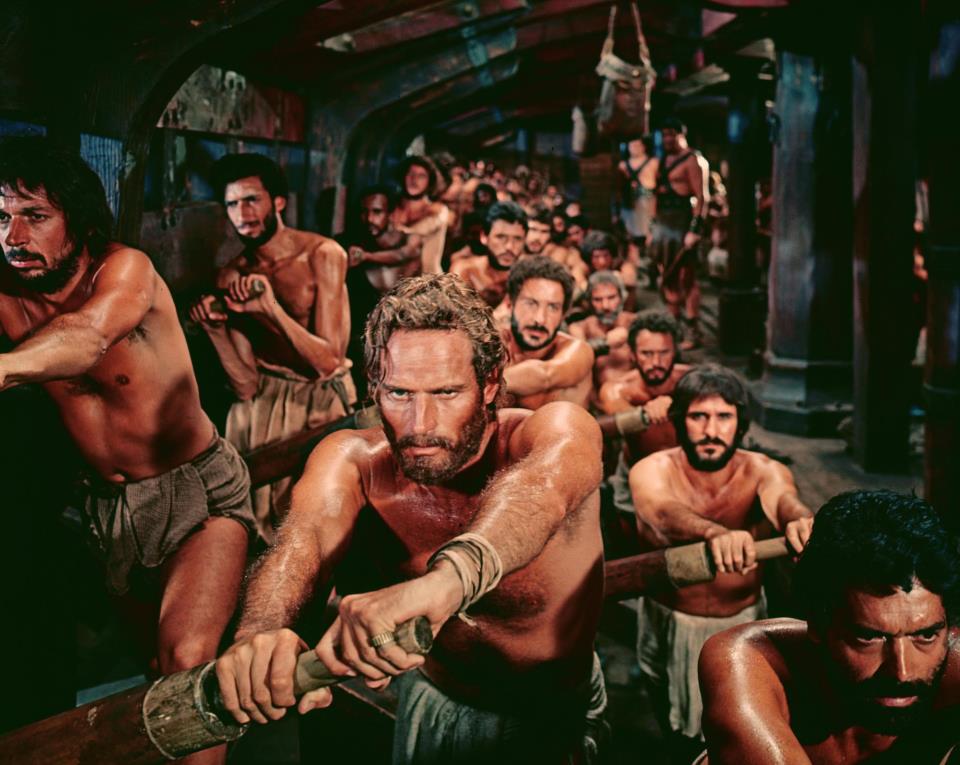 You’ve seen him before. He’s so common you might not even notice the guy: Always humbly bragging about how full his Inbox is. Always subtly focusing on a Calendar invite. Always meticulously cultivating the next Spreadsheet. The Army supply system has warehouses full of these Office Warrior Foot Soldiers, led by General David Petraeus’s semi-serious remark about his “inalienable right to have PowerPoint slides.” With leadership and ground forces, this less-than-desirable culture has secured a foothold in the Army, one that must be rooted out and rolled back. First up for execution, their slogan: Row Well and Live.

This motto traces its origin to 1959’s 11-Academy Award-winning film, Ben-Hur, in which Charlton Heston depicts a slave. During one famous scene, Heston finds himself on a galley ship, led by a Roman captor that advises Heston and his fellow slaves to “Row well, and live.” This film even has martial origins: the screenplay was adapted from the book written by Major General (Retired) Lew Wallace of the American Civil War’s Union Army. At least the saying has an interesting genesis.

Yet the phrase remains an insult to modern military professionals. Today, if a high percentage of your work is routine, repetitive – then your job is on the way to destruction or non-existence. This trend has been documented and decreed many times over by technologists, economists, social scientists, journalists, and amongst airpower enthusiasts. So every time you simply take a document off the shelf, change the date and use it again, you are hammering a ten penny nail into your own work coffin. Such redundant efforts are as unimpressive as yanking on two oars, and as such will be farmed out to machines in the near future.

To row – to apply a single, stationary, monotonous, repeated solution (pulling and heaving) to the same problem (water travel) regardless of condition – is laughably inappropriate as guidance for contemporary military professionals and practitioners.

Second, military professionals apply expert judgment to novel scenarios. Like bloody snowflakes, every war is unique. Conflicts change over time, as Iraq did from 2003 to 2006; and old conflicts (think: Korea) have new dimensions (nuclear and cyber weapons). And we are living in a period of dynamic transformation, which extends beyond the military. Indeed, this revolution can be seen in all other professions, described by Professors Richard and Daniel Susskind: the ways we produce and deliver expert knowledge to society are in the midst of unprecedented change. To row – to apply a single, stationary, monotonous, repeated solution (pulling and heaving) to the same problem (water travel) regardless of condition – is laughably inappropriate as guidance for contemporary military professionals and practitioners.

The more accurate turn of phrase is Row Well and Die. Show up and apply yesterday’s solution to today’s problem and you’re Darwin’s next customer. If you think rowing is the right metaphor for the modern military professional, then bring a floatation device along with your oars and mistaken ideas, because the next storm you encounter is as certain to overwhelm as the Titanic was to sink.

So tomorrow, when you see that Office Warrior Foot Soldier, help him out, tell him to Row Well and Die.

Major ML Cavanaugh is a U.S. Army Strategist, a Fellow with the Modern War Institute at West Point, and has served in assignments from Iraq to the Pentagon, and New Zealand to Korea. A Contributor at War on the Rocks, he looks forward to connecting via Twitter @MLCavanaugh. This essay is an unofficial expression of opinion; the views expressed are those of the author and not necessarily those of West Point, the Department of the Army, the Department of Defense, or any agency of the US government.
Share on Facebook Share
Share on TwitterTweet
Share on LinkedIn Share
Send email Mail
Print Print