The Russian–Ukrainian War: Understanding the Dust Clouds on the Battlefield 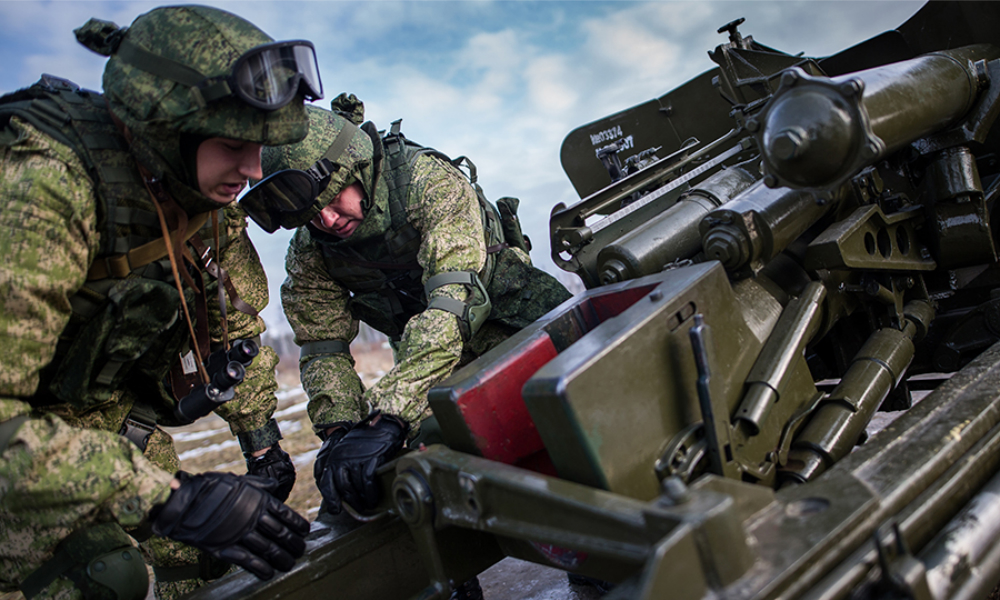 The battlefields in Eastern Ukraine represent part of a new era of warfare, or so we are regularly told. Analysts, pundits, and military leaders point to cyber warfare, hybrid warfare, and the gray zone. But look away from these shiny new concepts for a moment, and it becomes clear the Russian–Ukrainian war’s conventional character is far from new. In fact, it looks a lot like the last century’s World Wars. While the new aspects of this war have generated discussion within the defense industry as to the evolving character of war, an acknowledgement of the conflict’s conventional character is largely missing from the discourse.

To be sure, Russia’s actions in Ukraine have revealed several innovations, most notably the employment of the semi-autonomous battalion tactical group, and a reconnaissance-strike model that tightly couples drones to strike assets, hastening the speed at which overwhelming firepower is available to support tactical commanders. However, even these innovations are being used within a form of warfare that looks strikingly like that of a century ago.

The July 11, 2014 strike at Zelenopillya is perhaps the most noticeable example to emerge from the war of the combined effects of tactical drones with the battalion tactical group—a task-organized force designed to achieve tactical overmatch against opponents—and its organic fires capabilities. The attack was a preemptive undertaking against Ukrainian brigades, postured in assembly areas, which were preparing to conduct offensive action against Russian and partisan forces. The buzzing of tactical drones and cyber-attacks targeting Ukrainian communications preceded the strike. An onslaught of rockets and artillery fell on the Ukrainian position shortly after the drones arrived, leaving thirty Ukrainian soldiers dead, hundreds more wounded, and over two battalions’ worth of combat vehicles destroyed. This strike created anxiety within the US Army, specifically in relation to the sophistication of Russian cyber capabilities and the effectiveness of the new Russian reconnaissance-strike model. This strike also highlights the disparity in artillery and rocket munitions between Russia and the US Army. Russia still possesses and employs a variety of munitions, to include dual-purpose improved conventional munitions and thermobaric munitions, that the US Army elected to eliminate from its arsenal.

The Battle of Ilovaisk followed on the heels of the strike at Zelenopillya. Ilovaisk, a city on a critical highway linking the Donetsk People’s Republic (DPR) with Russia, was held by DPR partisans and Russian forces. In early August 2014, Ukrainian forces fed approximately eight battalions into the city, attempting to dislodge Russian and partisan forces from Ilovaisk. Their effort achieved moderate success—enough so that by the end of August, Russia dispatched multiple battalion tactical groups from its Southern Military District in Rostov-on-Don to regain control of the situation. These Russian forces encircled the town, isolating the Ukrainian forces at Ilovaisk, and began to lay siege to the city. Many Ukrainian soldiers reported hearing the distinctive buzz of Russian drones prior to the deluge of rocket and artillery fire—an indicator of Russia’s emerging tactic of using drones, linked directly to battalion tactical groups, to facilitate indirect fire. Ukrainian forces attempted to break out of their beleaguered position several times, but were never successful. By the end of the month, the critical situation forced the Ukrainian government to seek a political solution, which led to the Minsk Protocol on September 5, 2014.

The agreement allowed for a peaceful withdrawal of Ukrainian forces along a corridor back to Ukrainian-held territory. However, Russian forces opened fire on the Ukrainian forces as they withdrew. The carnage from the battle and the shooting gallery along the withdrawal corridor killed over 1,000 Ukrainian soldiers, wounded hundreds more, and destroyed scores of combat vehicles. The Battle of Ilovaisk was the bloodiest battle of the war for the Ukrainian army. The Minsk Protocol did little to inhibit combat operations, and Russian siege operations continued.

The next major Russian siege was at the Second Battle of Donetsk Airport—or “Little Stalingrad” to its Ukrainian defenders—which occurred from September 2014 to January 2015. During this battle, Russian forces sought to capitalize on Ukrainian initiative by allowing them to invest a considerable amount of force at the airport, before deploying multiple battalion tactical groups to encircle the facility. Once isolated, Russian forces and partisans began a slow, concentric squeeze on the Ukrainians controlling the airport, much of which consisted of incessant artillery and rocket bombardment. As their grip grew tighter, Russian and partisan forces entered and cleared terminals, hangers, and other facilities in which Ukrainian forces were located. The combined Russian–partisan team employed tanks in an infantry-support role throughout the clearance operation, providing covered movement from objective to objective and using mobile, protected firepower to achieve local overmatch against Ukrainian infantry. The battle ended with the airport destroyed and Ukrainian forces having suffered approximately 200 killed in action, another 500 wounded, and double-digit losses in tanks, infantry fighting vehicles, artillery, and other combat vehicles.

The Battle of Debal’tseve was the last major siege of the Russian–Ukrainian War. Like the Battle of Ilovaisk, the two sides fought for strategically important highway links. The city of Debal’tseve, with 25,000 inhabitants, was the furthest east piece of Ukrainian-controlled territory. The city formed a salient into Russian- and partisan-controlled territory, which offered Russia an enticing opportunity to shore up its front lines. On January 14, 2015, Russian and partisan forces attacked, aiming to collapse the shoulders of the salient and cut off the Ukrainians in the city—a pincer movement reminiscent of the Battle of the Bulge. Once isolated, Russian forces launched massive salvos of rocket and artillery fire at Ukrainian forces and on the city’s infrastructure. They also cut power and utilities in the city, creating a humanitarian crisis within Debal’tseve. By the end of January, Russian offensive action, coupled with the harsh Ukrainian winter, led to the death of 6,000 civilians. Another 8,000 fled Debal’tseve. The battle triggered the Minsk II agreement on February 11, but fighting continued until February 20, when the city fell to Russian and partisan forces. All told, the battle saw approximately 8,000 Ukrainian soldiers defeated by over 10,000 Russian and partisan forces. The Ukrainians suffered close to 200 killed in action, over 500 wounded, and hundreds missing or captured.

What explains Russia’s evident preference for the siege? Would it not make more sense to quickly annihilate the Ukrainians? Perhaps. However, the siege’s benefit is its ability to transfer military power into political progress, while obfuscating the associated costs. A rapid, violent, decisive victory in which hundreds of Ukrainian soldiers are killed in a matter of days is counterproductive to Russia’s political goals, whereas the incremental use of violence over time accomplishes the same objectives with less disturbance to the international community. Imagine a formation of tanks driving through the desert. They can quickly get to an objective by driving full-throttle, but in doing so they kick up a large amount of dust, making the formation and its direction of travel observable to any onlooker. However, a formation of tanks moving slowly through the desert produces a much smaller dust signature, making its presence less noticeable and its intentions less discernible. “Dust clouds” on the battlefield are inevitable, but how they are managed in pursuit of political objectives is the essence of good strategy. This is a key consideration in understanding Russia’s proclivity for the siege.

The Russian Threat Beyond Eastern Europe

Looking beyond Eastern Europe, Russia is employing a similar approach to war in Syria, specifically in Aleppo. Russian armed forces, in conjunction with Syrian allies, have encircled the city, cut all ingress and egress routes, and ruthlessly assaulted the city. So Russia’s fondness for the siege is evidently not unique to Ukraine. The methods Russian forces employ in Syria are different than those in Ukraine; for example, in Syria they use airpower in lieu of the rocket and artillery fire in Ukraine. But the approach—use of the siege to achieve political ends—is the same in both.

These new features of Russian warfare—and an understanding of them in the context of that warfare’s very conventional character—should inform US planning. The contemporary Russian army is combat-experienced in combined arms maneuver at all echelons of command, a skill that the US Army is still working to recover after well over a decade of counterinsurgency operations in Iraq and Afghanistan. This fact could prove troublesome if Russia elects to push further in Europe, infringing upon NATO partners, or if US and Russian interests continue to collide in areas like Syria. Preparing to combat Russian cyber threats or hybrid tactics is important. But the lesson from Ukraine is clear: It is equally vital to train and equip US forces to counter the type of conventional capabilities Russia has demonstrated in Ukraine.

Amos C. Fox is a major in the United States Army. He is an armor officer and currently a student at the US Army’s School of Advanced Military Studies. He holds a bachelor’s degree from Indiana University-Purdue University at Indianapolis and a master’s degree from Ball State University. His previous assignments include tours with the 4th Infantry Division, the 11th Armored Cavalry Regiment, and the US Army Armor School. The views expressed in this article are those of the author and do not reflect the official policy or position of the Department of the Army, Department of Defense, or the U.S. Government.
Share on Facebook Share
Share on TwitterTweet
Share on LinkedIn Share
Send email Mail
Print Print