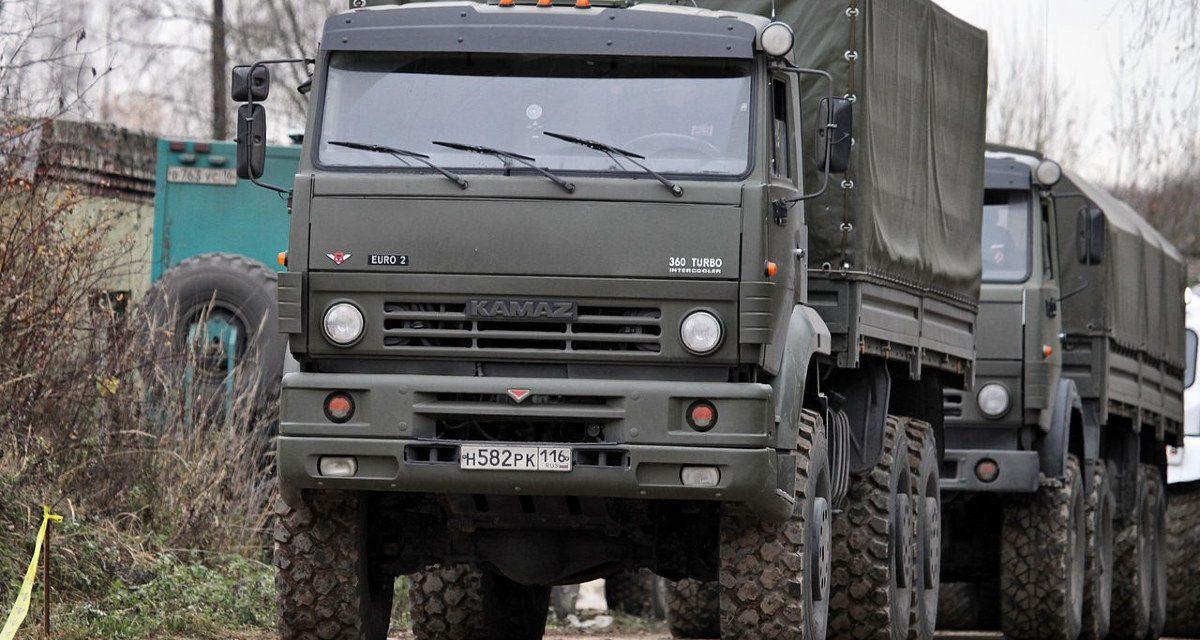 Russia’s invasion of Ukraine has gone slower than many Western analysts anticipated. In some areas, Russian forces advanced up to 120 miles in the first two days before coming to a halt. In other areas, especially around Kharkiv, the Russian offensive failed right away. While some delays are the result of successful Ukrainian resistance, especially around Kharkiv, others are the result of logistical challenges encountered by the Russian army; some US officials have suggested that logistics are a “definite vulnerability” for Russia.

Keeping a modern military supplied with fuel and ammunition is always a major challenge, especially when launching deep offensive operations that stretch supply lines. Even the US Army had to have an operational pause during Operation Iraqi Freedom in 2003 due to logistics shortfalls and truck shortages. The Russian military is no exception. While Russian forces are facing serious logistical challenges, armies have overcome such difficulties in the past, and they are unlikely to prove fatal for the invasion.

The war in Ukraine has allowed a reassessment of earlier analyses, including my own work, on the Russian army’s logistical capability. Russia was always going to face logistical difficulties, especially when launching a major ground offensive far beyond Russian railheads. Ukraine is a massive country of forty-four million people spread out over two hundred thousand square miles. It is over seven hundred miles across and three hundred miles from its northern border to its southern Black Sea coast, posing intense logistical and sustainment challenges.

A proper assessment of Russia’s logistical difficulties is challenging amid the fog of war that’s shrouding Ukraine. The Russian government is a black hole of information. It has refused to embed reporters with frontline units and its official statements are unreliable and lack details. The Ukrainian government, meanwhile, is understandably focused on communicating stories that boost morale and gain Western support. Factual accuracy is of secondary concern, as demonstrated by the “Ghost of Kyiv” story, which was of questionable veracity, and the news that thirteen Ukrainian border guards defending Snake Island, who were recorded saying “Russian warship, go f—k yourself,” had all been killed, a report subsequently corrected by the Ukrainian government when it announced they had in fact been taken prisoner. This leaves civilian posts on social media. Those are problematic because they are scattered across the breadth and depth of the battlefield, making it hard to piece together a coherent picture. It is never certain if the available videos represent isolated incidents or the tip of the iceberg.

So far, Russian ground-based logistics are still functioning despite severe issues. The Russian spearhead attacked up to distances of at most 120 miles and halted after burning through the supplies and fuel available at the unit level. The logistics pause lasted several days, leaving Russian spearheads with limited mobility, until supply columns could catch up.

This task was made more difficult due to increasing local resistance in the Russian rear, especially in the north. It’s impossible to gauge the full scale of resistance, but after five days the Russian army appeared to cease moving individual vehicles and start convoy operations with armed escorts, reducing casualties but decreasing efficiency. What is surprising is that the Russian National Guard has not immediately moved to secured lines of communications. The Russian National Guard is composed of full-time paramilitary units specializing in internal security (not to be confused with US part-time military forces), and in wartime these units’ task is to provide rear-area security of occupied territory. Together with forces from the FSB, the main Russian intelligence service, they play an important role in Russian counter–irregular warfare operations. The slow deployment of these forces is hard to understand and has played a crucial role in the initial degradation of Russian logistics.

Rail and pipeline operations, which form the backbone of the Russian army, do not appear to be established at scale yet. Although videos of some early railroad operations have surfaced, key problems remain in urban terrain. Railroads are built to link population centers, industrial sites, and raw materials. This means that most railroads run through urban terrain. So far, the Russian army has captured only a few cities along its route of march. Most have been bypassed and blockaded. Currently only in the south, around Kherson and Melitopol, are the railroad lines entirely in Russian hands. They are also the only places where Russian trains have been seen. Until all the cities along the rail lines are captured, the Russians will not be able to use Ukrainian railroads in most theaters.

As the Russian army captures territory, it has to feed the local population. Combat operations are disrupting established food distribution networks, leaving civilians without food. If Russia plans to win the hearts and minds of the occupied territories it must ensure adequate food and basic social services. The Russian army has traditionally done this with support from other government ministries, and there is some evidence that they are doing this already. But it will place additional burdens on the Russian logistical network and add extra impetus to Russian efforts to reopen the railroad lines before its combat forces can advance farther.

The one aspect of deep mechanized operations that gets even less attention than logistics is maintenance. Armored vehicles break down—a lot. Russian battalion tactical groups, combined-arms fighting formations of up to one thousand troops, on average only have one light and one heavy recovery vehicle, although there are more at the regimental or brigade level. During short-range operations that is not an issue. Combat formations have the organic capabilities to generate an effective area security around their battlefield footprints. The recovery vehicles can quickly pick up broken equipment with minimal escorts, because there is always a friendly force nearby. Short towing distances allow recovery vehicles multiple turns in a short time, enabling Russian forces to make do with a minimal number of recovery vehicles at the battalion level.

None of this applies during deep operations. Broken vehicles need to be towed up to a hundred miles or combat vehicles must be diverted for towing. After all, only a heavy recovery vehicle or a tank can tow another tank. Long road marches generate large numbers of broken vehicles, greatly exceeding recovery assets in Russian battalion and regimental formations.

To be clear, this is not just a Russian problem. It is common to all armies around the world. But it is a particularly painful problem for the Russians at the moment. In the north and south, the Russian army conducted deep penetration attacks, covering up to 120 miles. Initially, no forces were left behind to secure the line of communications. This meant that broken vehicles were either abandoned or required combat vehicles to be diverted to tow them. Based on multiple pictures emerging online, after a certain point Russian commanders decided to abandon their vehicles. Crews were initially left with them, but as resistance emerged the Russian army stopped leaving crews behind, fearing that they would be captured or killed.

Establishing forward repair points is also dangerous. Once repair starts, vehicles become immobile and it’s impossible to displace them in case of indirect fire or partisan attacks. At least one Russian field repair shop already appears to have been destroyed.

As bad as maintenance is for Russian forces, however, it is not catastrophic. Russia has large amounts of reserve materials that can be used to replace losses. Right now, professional soldiers are more valuable than their equipment, which may explain why Russian leaders are more willing to abandon it. In addition, most of these vehicles are scheduled for replacement by the next generation of tanks and infantry fighting vehicles.

What Do Russian Logistics Challenges Mean?

Today, it’s premature to say that the Russian army is bogged down or losing in Ukraine because of its sustainment issues. The Russian military is likely to overcome its logistical and maintenance challenges once captured railroads become operational. One new railhead is likely at Kherson, to support the drive against Odesa. Another railhead will be established somewhere south of Zaporizhzhia for a drive north toward Dnipro. Only the Kyiv operation will take longer because the rail lines going there pass through Chernihiv and Nizhyn, which the Russian armed forces will have to clear before the battle for Kyiv can begin. Once new railheads are established, it will alleviate pressure on Russian truck-borne logistics by shortening the supply lines.

The maintenance issue also delays operations but does not stop them. Large vehicles losses are detrimental but not catastrophic. Russian factories are far from the fighting and can replace Russian losses; Ukraine’s main combat vehicle plant is in Kharkiv, where heavy fighting is currently ongoing, and parts of the plant are already destroyed. Once new railheads are established, Russian forces are likely to transport replacement vehicles by rail and regenerate their combat forces. They are also likely to recover some of their abandoned vehicles as the National Guard continues to establish area security throughout the occupied territories.

Once the Russians have established new railheads and reorganized, their logistics forces will allow a renewed offensive of up to 90–120 miles, at which point they will have to halt and reset their logistics forces once more. Russian weaknesses in logistics are slowing their advance down, but by themselves they are not catastrophic. Given time, Russia should be able to overcome its logistical difficulties.

Lieutenant Colonel Alex Vershinin retired after twenty years of service, including eight years as an armor officer with four combat tours in Iraq and Afghanistan and twelve years working as a modeling and simulations officer in NATO and US Army concept development and experimentation. This included a tour with the US Army Sustainment Battle Lab, where he led the experimentation scenario team.