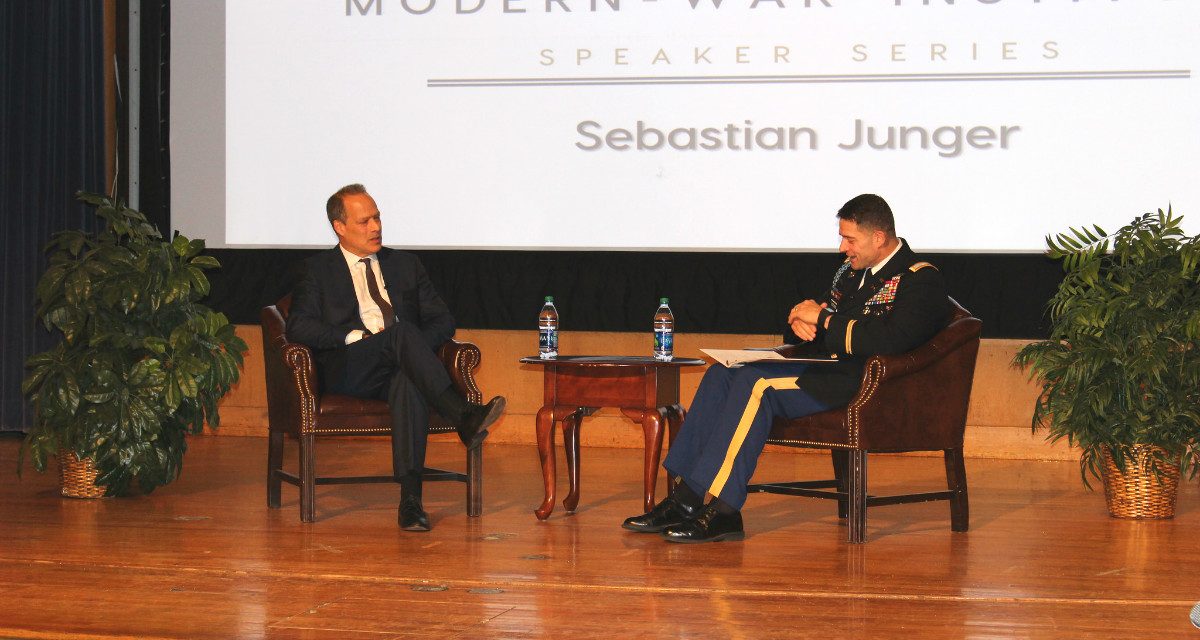 On November 16, award-winning author and director Sebastian Junger spoke to several hundred cadets in Robinson Auditorium about his new documentary, “Syria’s War: Hell on Earth,” which chronicles the humanitarian disaster unfolding in Syria and traces the rises of the Islamic State. The discussion was moderated by Col. William Ostlund, who knows Junger from the time embedded in Afghanistan’s Korengal Valley with then–Lt. Col. Ostlund’s 2nd Battalion, 503rd Infantry Regiment, which formed the basis of his 2010 and 2014 documentaries, respectively, Restrepo and Korengal.

The discussion covered a wide swath of territory, from military leadership and humanitarian interventions to race relations within the military and the difficulty of reintegrating our soldiers back into society following their deployments.

Junger has covered a number of wars, from the Balkans to Liberia to Afghanistan. What unites them all, he said, is that a “few violent and well-armed people can throw [a country] into chaos.” He said he became a war correspondent for much the same reason many young men and women join the Army: “It made me feel like my life had some purpose.”

On the ability of the United States to militarily intervene and prevent violence or a civil war, Junger said that this can only come about early in conflicts, when there is a chance to broker a deal. He even advocated for a mechanism to give someone like Bashar al-Assad political asylum abroad, if his absence would prevent future conflict.  He pointed out that US force has not always been used smartly or effectively, especially when US airpower has led to civilian casualties.

“If we do it, everyone else will do it,” Junger said of the American military’s previous use of indiscriminate force, not to mention it is a “betraying of our values.” “Restraint,” he added, serves a strategic as well as tactical purpose. That goes in spades in wars like the one America is fighting against Islamist extremist groups like the Islamic State with no endpoint, which he likened to the war on drugs or cancer.

Part of what got him through all the violence he saw, including losing his colleague Tim Hetherington, a photographer killed covering the war in Libya, was his ability to tune out the devastation and suffering he saw. “I had this crushing feeling of guilt that I didn’t feel anything,” Junger said.

He also discussed the troubles soldiers faced when they come home from war, themes he developed in his 2016 book, Tribe: On Homecoming and Belonging. He talked about how issues like race were joked about among soldiers to demonstrate how unimportant they were in a cohesive unit. “The United States is always catching up to our military on social issues,” he pointed out, noting how hard the transition can be to non-communal life, especially among minority soldiers. Issues like PTSD and a lack of feeling of community is exacerbated by America’s modernity and wealth, which has strengthened our sense of individualism at the expense of stronger social community ties.

When it comes to the identity politics dividing America, “Those distinctions are not important out there,” Junger told cadets. “You’re only judged by how you act.” To illustrate his point, he closed with two examples of leadership culled from his previous documentaries, Restrepo and Korengal.

Watch the video of Junger’s remarks and discussion here.