Self-Development in the Army: We’re Doing it Wrong 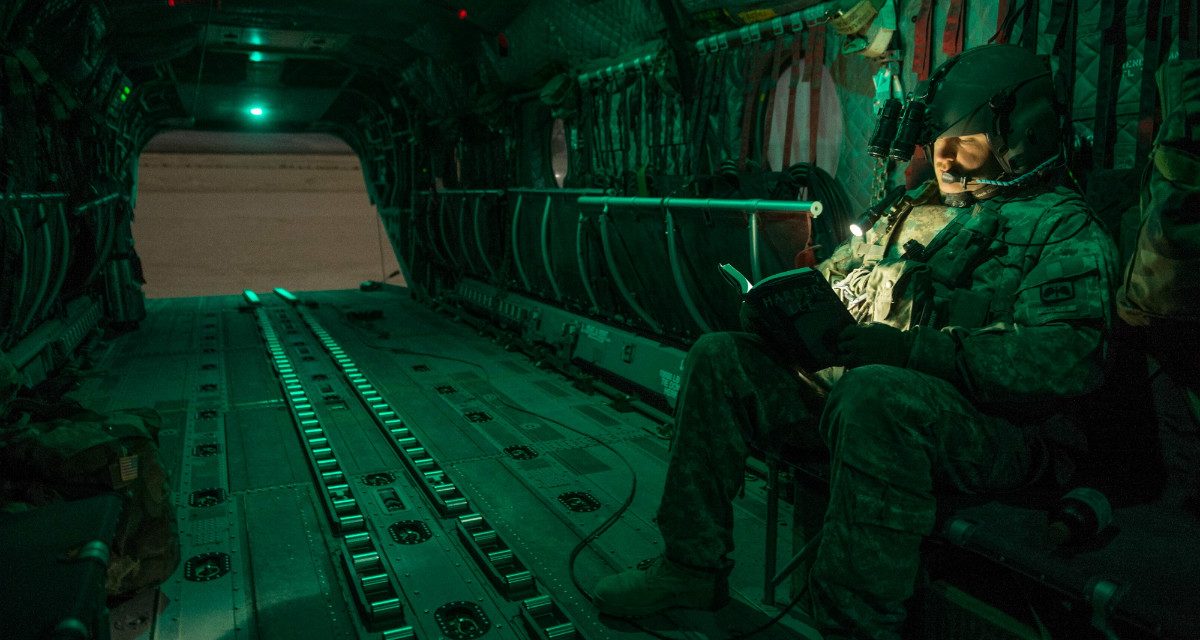 The United States Army spends a remarkable amount of money developing individuals to take on the responsibilities of a junior officer—$340,000 in the case of those who commission from the United States Military Academy. But in the years after pinning on the gold bar of a second lieutenant, the responsibility for junior officers’ development begins to fall, in part and for the first time, on their own shoulders. This is not a bad thing—self-development is a defining characteristic of effective members of any profession, including the profession of arms. But the Army must better facilitate this important practice by drastically increasing its focus on the self-development learning domain among junior officers.

Lieutenants are vital cogs in a much larger operational machine. Those serving as platoon leaders are at the nexus of translating a commander’s intent for an operation into discernable bites that are easily digestible by squad and fire-team leaders for execution on the battlefield. That translation is critical to ensuring favorable individual and leader decision-making. I argue that a wholesale revamp of the Army’s approach to self-development needs to occur in order to ensure that junior officers are able to translate their commanders’ intent into meaningful language that aids tactical decision-making and understanding of subordinates.

I had six platoon leaders and three executive officers move through my company over the span of fourteen months in command, six months of which were spent deployed to eastern Afghanistan. My perspective on this topic is based on that experience of having had direct oversight of nine lieutenants, the majority of whom are exceptional tactically (case in point: two are currently serving in the 75th Ranger Regiment). While I acknowledge the limits of such empirical observations, I do believe the Army needs to begin a conversation about what appears to be a general lack of understanding of the geopolitical environment and the type of knowledge that should be learned through self-development.

According to Army Doctrine Publication 7-0, Training and Army Regulation 350-1, Army Training and Leader Development, the Army has three learning domains: institutional, experiential, and self-development. Institutional development occurs at professional military education courses where the service member is assessed via an Army academic evaluation report, similar in grading style to a high school report card. Experiential development occurs on the job; actually serving in the role as a platoon leader or executive officer develops the individual who is then assessed via an officer evaluation report. Both of these domains are limited, though: institutional learning focuses strictly on doctrinal education for lieutenants, while experiential learning focuses principally on tactics and general leadership. Moreover, the experiential development assessment in the Army has issues similar to those in the Air Force noted by Ned Stark, which are beyond the scope of this article, but I encourage reading the Ned Stark article as several parallels exist with the Army’s officer evaluation report system.

The third learning domain, self-development, is left completely unassessed. While the captain’s career courses now require taking the GRE (Graduate Records Examination), and this is a step in the right direction, there has been no systematic way to track an individual officer’s commitment to self-development. Though it is arguably common knowledge that officers will need a graduate degree as they progress to field-grade rank, until this GRE requirement was instituted, there was no way to track progress toward that unspoken requirement. I only had one of nine lieutenants pursuing a master’s degree while in a leadership position—which I only knew about because I asked. As of now, the Army lacks any real way to codify a leader’s self-development, and typically, that which is not evaluated is ignored.

More to the point, I have come to see a disturbing lack of basic knowledge regarding the current state of global affairs and operations. When I took command in Afghanistan, I administered a knowledge-based assessment (this is the actual assessment I used) to determine what the areas of focus for officer professional development should be. Questions like “Who is the current leader of the Taliban?” were left unanswered—while we were in Afghanistan conducting combat operations. Other questions, like “Describe the Suwalki Gap and its effect on NATO operations” or “Is Ukraine a NATO ally?” were similarly left blank or, when a single-word “yes” or “no” response was given, were clearly guessed at.

When discussing the answers to these questions during a lengthy answer review, despite the Army constantly stressing the importance of self-development in the form of senior-leader reading lists, available tuition assistance, and other self-development pathways, it was evident that few maintain rigorous attention to this domain. When I hear lieutenants talk about self-development, they most frequently mention preparation for Ranger School or Special Forces selection—physical self-development. Rarely do I hear of self-development emphasized in an intellectual sense; I have yet to hear any junior officers, during counseling on self-development, tell me that they completed a course through the Army’s distance-learning programs on calling for fire, information operations, irregular warfare, or the many other options available.

And this is where it becomes a problem: the lack of institutional focus on self-development degrades junior officers’ ability to understand, internalize, and disseminate tactical guidance and the commander’s intent within strategic and operational goals. But this can be changed. In fact, the knowledge-based assessment I administered awoke a significant hunger for learning in most lieutenants that I found quite impressive.

The Army, as a whole, lacks an objective way to assess officers’ commitment to the self-development domain—currently, there is only a subjective assessment from a senior rater (in the case of a lieutenant, the battalion commander, a lieutenant colonel) of the individual’s potential for further service. I believe that the Army needs to codify a self-development assessment and reporting system that objectively captures individuals’ ability for self-study and commitment to self-improvement.

While I am thoroughly against another web-based reporting system on top of evaluation reports (the Army’s abortive Multi-Source Assessment and Feedback comes to mind as an onerous and ineffective system), there should be some way to capture this. The Assignment Interactive Module 2.0 shows some promise; with officer evaluation support forms and a resume-building tool, it could potentially enable a senior rater to stratify his or her subordinates in this learning domain. As the self-development pathway for each branch varies greatly, I believe this program of reporting, and its requirements, should be built by the chief of each branch, in a structured self-development approach similar to the program currently used by the noncommissioned officer corps.

Progression through the junior-officer ranks, second lieutenant through captain, should have some structured self-development program that ensures officers are dedicated to improvement. In its simplest form, each branch chief could identify distance-learning courses required to be considered for promotion to the next grade, which senior raters could certify as complete on evaluation reports. In addition, though labor-intensive and potentially cost-prohibitive, the branch chiefs could establish a reading and writing program to help identify superior potential in junior officers, with submission and feedback provided through writing centers. Currently, this is captured to some degree in writing assignments in institutional learning environments like basic officer leader courses and captain’s career courses, but it is not a continuously evaluated metric. As the Army develops and incorporates the new Army Talent Alignment Process, there is an opportunity to completely transform the self-development domain—and introduce new evaluation tools—to ensure the best candidate is assigned to the right job.

In the absence of any self-development domain assessment, at the company level I developed a program guide that, while far from perfect, I believe provided sufficient data points for both me the lieutenants’ senior rater to better evaluate their performance and potential. The program works on a quarterly scoring system that tracks their efforts in reading books, giving briefings to subordinates and superiors on geopolitical topics, and distance learning. Additionally, for platoon leaders and platoon sergeants, it assessed their ability to influence and direct their subordinates to participate in self-development as well and worked as a forcing function to get them deeply invested in their soldiers’ personal development.

In the program, platoon leaders are required to read one book per quarter and their comprehension was assessed during their quarterly counseling discussions. It provided an opportunity for the lieutenants to demonstrate their understanding of each book’s major themes and provided me, as their rater, with an additional opportunity to assess their communication skills. Lieutenants were required to conduct two briefings to their platoons and one briefing to me on a geopolitical topic. Again, this assessed their briefing and communication skills and provided an opportunity to assess their research skills. And finally, the lieutenants were assessed on the total amount of distance-learning hours they completed each quarter. The program had built-in solutions for field and temporary-duty time conflicts and also counted any graduate-level coursework completed. A copy of the annex included in my initial counseling with all platoon leaders and platoon sergeants is here.

While some platoon leaders were more invested in the program than others, I would still qualify it as successful as it highlighted to me the degree to which platoon leaders took ownership of their own self-development. By no means a one-size-fits all program, I highly recommend that company commanders review the program and see if it can work within their formations. Ultimately, the Army as an institution needs to enable the self-development of junior officers and ensure they are fully prepared to assume positions of greater responsibility and influence. Adding a program guide to assist in identifying top performers can only benefit the Army as it prepares for the complex operating environments of modern war.

Capt. Jon Tishman is currently assigned as a team leader in 2nd Battalion, 4th SFAB at Fort Carson. He commissioned in 2008 from the Virginia Military Institute and served in Iraq and Afghanistan with the 10th Mountain Division and 75th Ranger Regiment. Following a four-year break in service working in military equipment sales in Australia and medical robotics in New York, Jon re-joined active duty and deployed as the commander of Bravo Company, 2-23 Infantry Regiment.