Sending in the Troops: The Kerner Report, Civil Unrest, and the US Military 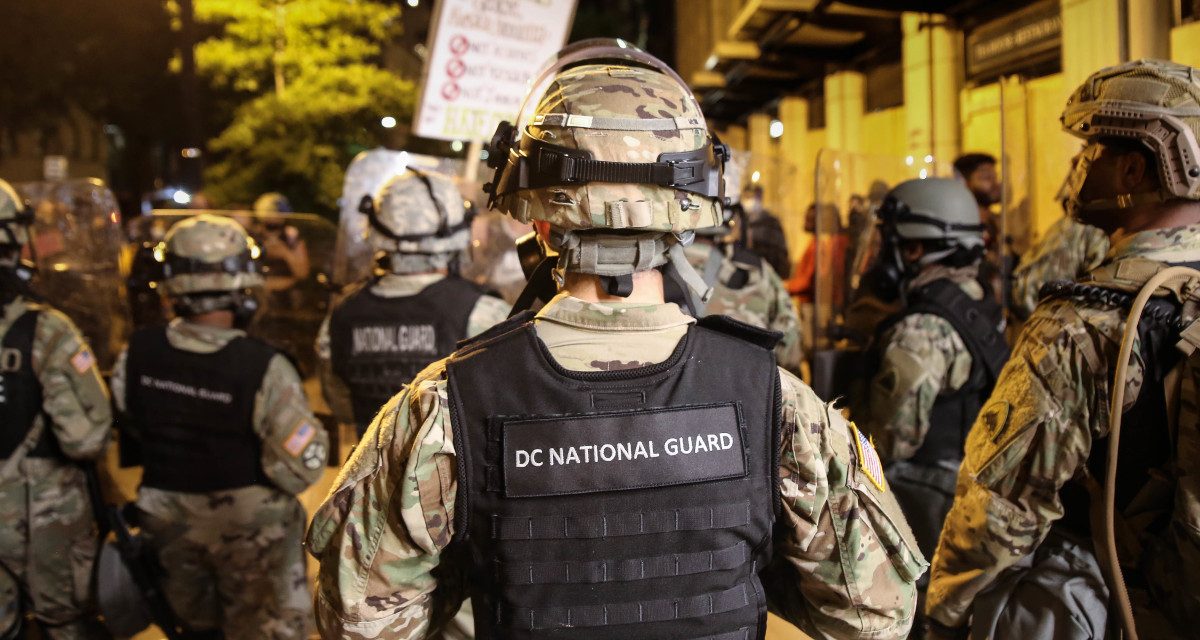 In June 2020, scenes unfolded on American television and social media of the National Guard mobilized to the District of Columbia in response to civil unrest. I was part of that mobilization. These were not scenes without precedent. In 1967, 1968, and 1992, the United States military quelled unrest in American cities. Following the 1967 riots, President Lyndon Johnson formed the National Advisory Commission on Civil Disorders to identify the genesis of civil unrest in the United States. Referred to as the Kerner Commission, it released a six-volume, 444-page report, known as the Kerner Report. Despite being over fifty years old, the report’s abstract outlines the same challenges America faces with racism today. The Kerner Report sold over one million copies in its first two weeks of publication but is, unfortunately, an often-forgotten piece of history. The report’s lessons and the National Guard’s 2020 experience in Washington, DC can help military leaders think critically about activism in the United States and the military’s response to civil unrest.

In 1967, the Army established the Task Group on Army Preparedness in Civil Disturbance Matters to study the performance of active Army troops and the Army National Guard in quelling civil unrest following riots in Detroit. Lessons learned from that task group led to drafting the GARDEN PLOT operational plan, which addressed how the military would handle civil unrest in multiple cities at once. Last used during the 1992 Los Angeles riots following the Rodney King verdict, the GARDEN PLOT plans were retired after September 11, 2001.

Shortly after the Army’s task group completed its work, the Kerner Commission identified that residents of cities who witness police brutality and endure systemic racism would likely protest in response to these events and conditions. That form of response continues today. However, observing police brutality is no longer reserved just for residents who watch from their porches, playgrounds, and local establishments in urban settings. Today, millions of people worldwide witness police brutality via social media, including the eight-minute footage of Mr. George Floyd’s murder. Cumulatively, numerous viral videos containing graphic and disturbing abuses have sparked a national awareness about race and policing. This consciousness contributed to the global Black Lives Matter movement and helped ignite marches of solidarity worldwide.

No commission has yet been established to determine the underlying causes of the 2020 civil unrest. The Kerner Report, however, reveals the lengthy history of similar events with similar causes in the United States. Social scientist Dr. Kenneth Clark testified before the Kerner Commission, presciently stating,

The military is not responsible for solving the challenges of police brutality and systemic racism identified in the Kerner Report. However, as alluded to in President Joseph Biden’s 2021 Interim National Security Strategic Guidance, the United States will recommit to protecting the right to demonstrate peacefully. As evidenced in the past, this might require the government to use the military to safeguard Americans’ right to express their First Amendment rights and respond when unrest occurs. Given the increase in populist rhetoric and the deepening partisan divide around race in America, future unrest and the likelihood of National Guard support seems likely if not inevitable.

Along with its interagency partners, the military is accountable for establishing a safe and secure environment for citizens to exercise their First Amendment rights when deployed for civil unrest. Overall, any military unit’s ability to act in the dynamic and fragile situation of civil unrest either contributes to or quells violence. Traditionally, the first military element to respond to civil unrest has been the National Guard. If the National Guard were to fail to create a safe environment for First Amendment expression, federal troops might be required, as was the case in 1968. Under the Insurrection Act, the president can invoke federal active-component forces to quell unrest if a state cannot manage the breakdown of law and order. If the National Guard can manage the situation, federal troops will likely not need to be employed.

In 2020, then-President Donald J. Trump considered invoking the Insurrection Act. In Washington, DC the mobilization and deployment of 5,100 National Guard servicemembers from eleven states contributed to the de-escalation of the situation and active-duty troops were not employed to quell the unrest. Furthermore, more than 1,600 active-duty troops from as far away at Fort Bragg, North Carolina and Fort Drum, New York were stationed to augment interagency partners and the National Guard if needed. Then-Secretary of Defense Mark Esper told reporters during a June 2020 press conference, “I say this not only as of the Secretary of Defense, but also as a former soldier and a former member of the National Guard, the option to use active-duty forces in a law enforcement role should only be used as a matter of last resort, and only in the most urgent and dire situations.”

Currently, for active-duty troops, little or no training is conducted at Army basic or pre-commissioning training on the domestic civil unrest mission. National Guard soldiers receive this training as part of their units’ annual training plans. As a result, my initial assumption was active-component federal troops would increase the potential for violence because such troops would not have the familiarity with local communities nor the same level of empathy as National Guard units who work and live where they serve. When looking at 1967 and 1968, I determined my assumptions were faulty as federal troops have quelled violence in cities and restored calm.

Another potential issue posed by using federal forces was that such a deployment would distract from primary mission sets, stress readiness levels, and degrade public trust in the military. Furthermore, the need to rely on federal forces could be a weakness that savvy adversaries could exploit via disinformation campaigns or even a physical attack. The National Guard’s ability to provide a ready, resilient force is imperative to deter adversaries from exploiting vulnerabilities in the homeland.

As with the riots in the 1960s, the events of 2020 are an opportunity to update and reflect upon lessons learned in the modern era of civil unrest. First, the findings of the Kerner Commission offer analysis into the causes and effects of systemic racism. Leaders who can recognize, understand, and empathize with the societal drivers of unrest will better manage servicemembers charged with enabling peaceful protest and maintaining order. The need for empathy is why the military’s extremism stand-down and diversity training are crucial to mission accomplishment across the range of military operations.

Second, there was a daily emphasis on mental health while the mission was ongoing. It is essential to recognize that servicemembers will likely encounter family, friends, and neighbors as during a civil unrest mission. As Torrie Osterholm, director of psychological wellness and health for the District of Columbia National Guard (DCNG), described, “Some are dealing with a moral injury in this mission. They feel conflicted about the issues and may have wanted to participate differently.” The DCNG immediately stood up a behavioral health hotline that added to the chaplain teams’ capabilities, Military OneSource counseling, and nonprofit organizations such as the Cohen Clinic, all of which offered daily support to the DCNG’s troops. The ability to process stress in real time contributed to professionalism, discipline, and greater cohesion among the soldiers on the mission.

Third, units should actively recruit to reflect the communities they serve. For example, the DCNG’s 372nd Military Police Battalion is primarily made up of Black National Guardsmen and women who reflect and represent the people and the community of Washington, DC. As part of its messaging to the DC community, the DCNG embraced the stories and experiences of soldiers who protected peacefully protesting citizens. The command employed information awareness to amplify the soldiers’ perspectives on the mission, which often mirrored the communities they were protecting, creating a shared narrative of togetherness and identification with the societal issues challenging the community. An inclusive command climate that sets the tone for acceptance while the mission is ongoing can be a force multiplier in ensuring the unrest is managed civilly and reducing “Us vs. Them” bias.

Fourth, the National Guard needs to prioritize equipping the military to respond to domestic civil unrest. Readiness starts long before any mission. The protective equipment for civil unrest missions is different from the equipment needed for deploying to a hostile combat environment or responding to a natural disaster. Depending on the intensity of the crowds, servicemembers will need protective face shields and riot gear. In 2020, National Guard units from outside Washington, DC had less than twenty-four hours to mobilize and deploy, which resulted in units arriving in Washington, DC without uniformity in their packing lists. Some units even brought their own ammunition and weapons, which was unnecessary for the mission. The DCNG, a unit of only 2,700 servicemembers, worked tirelessly to absorb inbound units and conducted sustained logistical operations to ensure the needs of their state partners were met. Quick thinking, resourcefulness, and proximity to nearby active-duty military bases made accessing logistics possible. However, preparedness needs to focus on proactive planning for civil unrest, similar to how states train for reoccurring natural disaster response or a chemical or biological attack. That planning should include both logistics preparation and operational response.

Lastly, leaders need to train for posture and force protection in domestic settings. It is a leadership responsibility to manage the reality and perception of escalation of force while interacting with the public. For example, wearing a Kevlar helmet instead of a soft cap might send an unintended message about the military’s posture in a domestic setting. Leaders will need to manage the safety and wellbeing of those in their command while restoring or establishing a calm, safe environment for First Amendment expression by studying and training for possible scenarios. A National Guard servicemember who served on the 2020 civil unrest mission in Washington, DC reflected, “I have never worked a protest, I have never worked a demonstration, I have never worked a riot. Neither has any of my guys.” Familiarization, concepts, and critical training from Army Training Publication 3-39.33, Civil Disturbances must be considered for introduction during basic or pre-commissioning training to maximize safety for servicemembers and the communities they serve.

Laura Keenan is a lieutenant colonel in the District of Columbia Army National Guard. She is a graduate of the US Military Academy and served on the June 2020 civil unrest mission in Washington, DC.

The views expressed are those of the author and do not reflect the official position of the United States Military Academy, Department of the Army, or Department of Defense, or of any organization the author is affiliated with, including the Army National Guard and the National War College.