Seven Pillars Revisited: The Myths and Misreadings of T.E. Lawrence 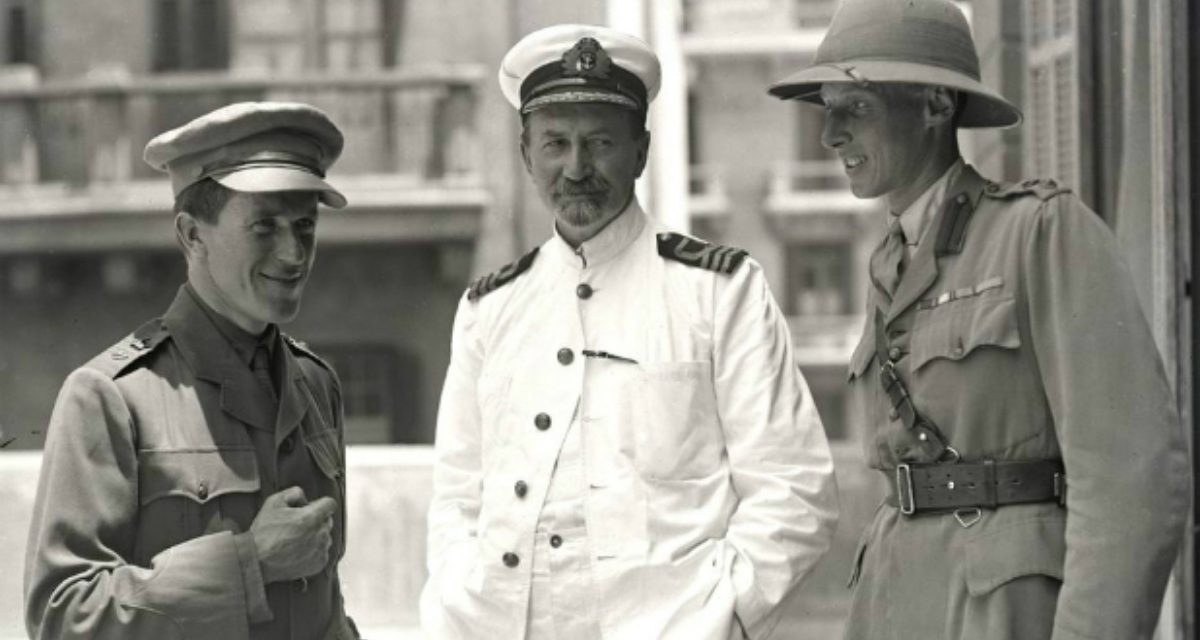 The iconic figure of T.E. Lawrence remains draped in myth. He appears to modern observers as the pensive Englishman photographed in flowing white Arab robes, or the hero portrayed by Peter O’Toole in the Academy Award–winning 1962 film Lawrence of Arabia. His writings on guerrilla war and on advising indigenous forces, meanwhile, are perhaps best known today for their brief appearances to buttress American and British counterinsurgency theory and doctrine.

Rob Johnson, the director of the Changing Character of War Centre at Oxford University and a former British Army officer, effectively strips away these myths and dissects recent misapplications of Lawrence’s thinking in Lawrence of Arabia on War: The Campaign in the Desert 1916–1918. In their place, Johnson reveals the true nature of both Lawrence’s war in the desert and his broader contribution to our understanding of irregular warfare—particularly as it relates to conventional campaigns against peer adversaries.

To be fair, many of the myths and misperceptions that have arisen around Lawrence and his war are partly legends of his own creation. In Seven Pillars of Wisdom, Lawrence’s bestselling account of the campaign in the desert, he sought to downplay British support for the Arab revolt and emphasize Arab contributions. In doing so, Lawrence sought to highlight what he perceived as the betrayal inflicted on the Arabs in the postwar settlement—in which the Western powers carved former Ottoman territories into French and British mandates, frustrating Arab dreams of self-determination—and to assuage his own ever-present guilt over this outcome.

In crisp, penetrating prose, Johnson reminds his readers that this context cannot be ignored. He ably highlights how what we might today call hybrid warfare—the combination of conventional and irregular forces, naval power, airpower, and information operations—enabled the great triumphs of the desert war. Without British naval support and airpower and the defensive capabilities of conventionally organized Arab forces, for example, the critical Red Sea bases that sustained Lawrence’s Arab guerrillas, from Yanbo to Wejh to Aqaba, would have soon been recaptured by Ottoman troops. By the conclusion of the campaign in 1918, the combined effort on the eastern flank of General Edmund Allenby’s Egyptian Expeditionary Force included not only Arab irregulars, but also British armored cars, conventional Arab troops, French artillery, and squadrons of British aircraft. Reading Johnson’s work, one cannot help but be reminded of the fifth special operations force (SOF) truth that “most special operations require non-SOF assistance.”

Lawrence’s contemporary writings highlighted the power of this combined effort and the potential of merging modern technology with indigenous willpower. Indeed, Johnson highlights how it was Lawrence himself who suggested the deployment to Arabia of British advisors armed with cash and the early twentieth-century version of high technology, such as explosives and Maxim guns, in place of conventional British brigades that were desperately needed along the front line in Sinai. This 1916 articulation of what we now call a light-footprint approach transformed the entire theater.

Johnson’s work represents a superb case study of how irregular warfare can interact with and support large-scale combat operations against a peer competitor. The efforts of the Arab uprising distracted the Ottomans, demoralized their garrisons, and kept over one hundred thousand Ottoman troops from joining the frontline opposition to General Allenby’s conventional force. In his praise for Lawrence, however, Johnson recognizes the centrality of the conventional campaign and correctly observes that “the balance of threat to the Ottomans was always clear.” As one captured Ottoman division commander told his interrogators, “The Arabs gave us pinpricks; the British—blows with a sledgehammer.”

The contribution of the Arab revolt, as Lawrence himself wrote, was less “algebraic,” or attritional, than “moral and psychological.” Lawrence’s forces contributed above all in what he described as the “bionomic and diathetic” realms. In the bionomic, or logistical, realm, Lawrence’s irregulars, combined with air raids, sowed havoc upon Ottoman supply systems in what military theorist (and Lawrence contemporary) B.H. Liddell Hart later called a “strategic barrage in depth.” These irregular raids also played on the “diathetics,” or psychology, of the opponent, leading soldiers to desert, cower in fixed positions, or conduct counterproductive reprisals against the local population. Politically, such operations, however minute their military value, served to energize the population in resistance and forge an identity beyond Ottoman rule.

The structure of Lawrence of Arabia on War enables the reader to understand the dilemmas and uncertainties of the desert campaign before turning to Lawrence’s intellectual contributions to warfare. By first explaining Lawrence’s world, the author avoids taking Lawrence’s ideas beyond their intended context—a charge Johnson convincingly levies against twenty-first-century counterinsurgency thinkers who sought to use Lawrence’s writings to buttress their own ideas. Johnson singles out Iraq War–era misapplications of Lawrence for his harshest criticism. Mentions of Lawrence in British and American counterinsurgency manuals, Johnson notes, “reduced the experience” of the desert campaign “to a handful of ‘take-away’ memorable components.” As Lawrence himself wrote, the solutions he conceived were designed “mainly in terms of the Hejaz,” and “of course not suitable to any other person’s need, or applicable unchanged in any particular situation.”

Perhaps the most repeated—and misused—Lawrence-ism was his injunction in the famous “27 Articles,” which stated: “Do not try to do too much with your own hands. Better the Arabs do it tolerably than that you do it perfectly. It is their war, and you are to help them, not to win it for them.”

While this was perhaps a useful starting point for practitioners, its out-of-context application may have actually harmed American counterinsurgency efforts, Johnson notes, by “creating a reluctance to act decisively, lead, or direct local forces when appropriate.” Recent scholarship by Mara Karlin, Stephen Biddle, and others supports this conclusion, and calls for the sort of intrusive and intensive advisory efforts discouraged in Field Manual 3-24, Counterinsurgency.

Indeed, Lawrence and other British advisors remained deeply involved at every level of the Arab revolt in an effort to resolve the principal-agent dilemma that arises in advising. At the tactical level, British officers like Lawrence led raids and railway demolitions, while British sergeants provided frontline firepower and technical expertise. In an environment with high stakes for the “principal,” tactical accompaniment helped prevent interest divergence, synchronize efforts with conventional British forces, and ensure the accomplishment of missions critical to the success of Allenby’s army. Operationally, healthy allocations of British gold allowed Lawrence and other more senior British officers to direct the Arab revolt in directions that suited British interests and maximized support for Allenby’s conventional attacks in Palestine. Organizationally, Lawrence helped select and empower certain leaders within the revolt—and punished others who engaged in counterproductive infighting or displayed incompetence on the battlefield.

Johnson effectively captures how Lawrence’s successes were not due to some innate genius or mastery of set principles of irregular warfare, but rather the product of an intense study of war. As a student at Oxford, Lawrence poured over volumes of military history in an attempt to understand the challenges faced by great commanders. While he did not recognize it at the time, Lawrence was following the advice of Prussian thinker Carl von Clausewitz, who urged commanders to undertake such a “critical analysis proper,” as opposed to “the plain narrative of the historical event.” Nor did his self-development stop during the desert campaign; Lawrence proved willing to learn from his own mistakes and those of his partners.

Today, Lawrence’s example should inspire serious reflection on “how small wars fit into big ones.” In an era of increasing geopolitical rivalry, irregular warfare will remain a vital supporting pillar to conventional operations against peer competitors. If they wish to avoid the mistakes of the past, irregular warfare practitioners should pay close attention to Johnson’s book—both as a superb analysis of the desert campaign and as an antidote to misapplications of Lawrence’s ideas on war. As Lawrence himself wrote, “If we must fight, we have no excuse for not fighting well.”

Major Sam Wilkins is an active-duty US Army Special Forces officer with deployments to Somalia, Nigeria, and Afghanistan. He is a graduate of the United States Military Academy at West Point and is currently a student at the Johns Hopkins School of Advanced International Studies.

These views are those of the author and do not reflect the position of the United States Military Academy, Department of the Army, or Department of Defense, or of any organization with which the author is affiliated, including Johns Hopkins SAIS.