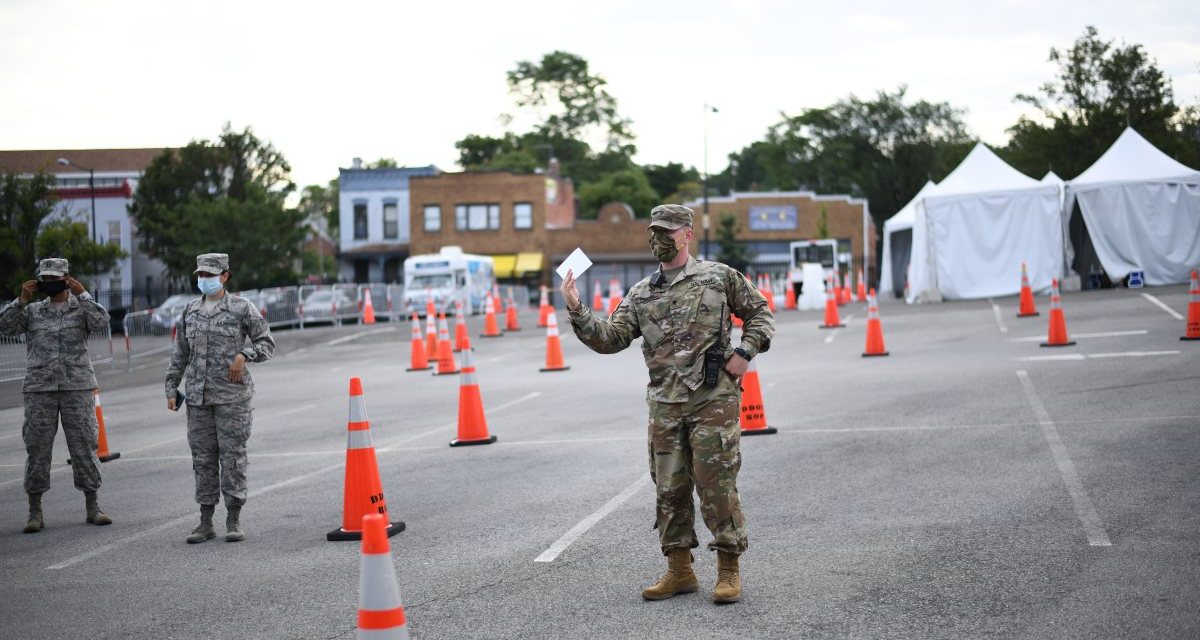 The pandemic has challenged the National Guard like no other modern disaster. On average, states experience repeat domestic challenges—like hurricanes, forest fires, flooding, and tornados—that, unfortunately, are often predictable, annual geographic events. This cadence of natural disasters occurring with relative seasonal predictability gives the National Guard the advantage of adequate preparation time, relevant training, experienced personnel, and tested playbooks to respond to challenges in their states and regions.

In contrast, the COVID-19 response has been a once-in-a-lifetime mission, with Army National Guard soldiers supporting it in all fifty states, three territories, and the District of Columbia in 2020. But the uniqueness of the COVID-19 mission does not guarantee the National Guard will not be confronted by pandemic outbreaks in the future. As such, the National Guard needs to improve readiness by including pandemic response in future training, mainly centering on national planning, modernizing information sharing, and increasing global coordination.

The COVID-19 response required the National Guard to adjust from the FEMA regional paradigm to one of national coordination. The FEMA regional approach makes sense during natural disasters, but is not as well suited to pandemic response. Gen. Joseph Lengyel, chief of the National Guard Bureau during the first several months of the pandemic, described the situation by remarking, “With COVID-19, it’s like we have 54 different hurricanes hitting every state, every territory, and the District of Columbia—some are Category 5, some are Category 3, and some are Category 1.” Usually, during a disaster nearby states can lend workforce and equipment to their most affected neighboring states.

However, with the virus’s outbreak, states were collectively vulnerable, and it was their most distant neighbors—those who were recovering or who had not yet had a surge in cases—who were in a position to lend support. For example, the California Army National Guard transported ventilators to New York, New Jersey, Illinois, Maryland, Delaware, Nevada, and the District of Columbia. Fortunately, units such as Task Force 46 of the Michigan National Guard, which prepares to respond to chemical, biological, radiological, and nuclear incidents inside the United States, had trained previously with other disaster response agencies. Task Force 46 spread one thousand servicemembers across fifteen states to augment medical and government agencies like FEMA. Beyond such specialized units and because of the limited national supply of critical resources and human capital, the National Guard must improve its pandemic response training, simulating nation-wide orchestration to move equipment and medical personnel from one hot zone to another expeditiously.

Each state in the Army National Guard navigated unprecedented responsibilities such as helping staff nursing homes, morgues, COVID-19 testing sites, food pantries, hospitals, airport screening sites, prisons, and alternative care sites. However, there was not a formal medium for soldiers in different states executing similar duties to communicate and learn from each other in the moment. This was a considerable disadvantage and risk to the efficiency of the response to these varied requirements. In one of the effective examples of formal information sharing, the Army National Guard integrated and benefited from Project ECHO virtual sessions. Project ECHO focuses on building provider capacity by connecting experts to local providers via virtual information exchange and includes various partners outside of government.

Knowledge sharing was also conducted informally in a grassroots way via social media. Private social media groups for resourceful officers allowed unprecedented relationships with other military officers working on similar projects across different states to form quickly. For instance, while serving on the COVID-19 response in Washington, D.C., I posted a generic request in a Facebook women’s Army mentorship group asking for any information on the construction of field hospitals. Almost immediately an active-duty officer serving in Texas responded with standard operating procedures her unit had used in Afghanistan for medical facility triaging. I later saw a similar post from an officer in the Kentucky Army National Guard in a Facebook West Point networking alumni group requesting information about alternative care sites. Other officers across different states responded quickly with suggestions and ideas to consider. Some groups are invite-only, and others require simple vetting.

This “in the moment” crowdsourcing for expert knowledge from other service components and in other states was invaluable. The military can creatively use existing infrastructure such as social media and social media groups to expand access to information, accelerate the speed at which it is shared, and foster relationship building. Most National Guard soldiers serve their whole careers in one state within the National Guard. Relationship building within a state can be insular, and states operate in silos that are separate from each other, limiting the information flow between states.

The Army National Guard has a substantial social media presence, but it is not dynamic in creating relationships. It is a public affairs tool that pushes out information to the public. An option among would be to create groups or endorse existing groups as a subcomponent of the Army National Guard social media pages, allowing soldiers assigned in different states to connect. COVID-19 accelerated the dependence on virtual experiences. The National Guard can improve readiness by streamlining information sharing during pandemics by leveraging social media.

Equally important, the National Guard’s capacity to share and receive relevant and timely information about pandemic response can reach beyond US borders. The National Guard’s State Partnership Program, which includes seventy-eight partnerships with eighty-four nations worldwide, gives unique access to information from allies and partners that can help the United States learn quickly from international responses. The relationship program, which is over twenty-five years old, allows people-to-people connections internationally, which helps the National Guard and our international allies and partners prepare for the next disaster—including, as we understand now, the next pandemic.

As the virus is at different stages worldwide, the United States stands to learn from and share with allies and partners. For example, soldiers from the New York National Guard’s medical command hosted a videoconference with their Brazilian military counterparts. The event focused on how New York went from having some of the highest infection rates to the lowest and included discussion of topics like the creation of alternative care facilities.

On the receiving end, the Illinois National Guard partnered with Poland’s military and received a nine-member Polish medical team who served in Italy during April and May of 2020. The Polish team shared best practices on what had worked in Europe with the local Illinois medical community and the National Guard, along with specific insights on using X-rays for diagnosis and how to streamline triage for patient care. The West Virginia Army National Guard shared lessons learned with Peruvian partners and Texas and Nebraska sent servicemembers to the Czech Republic to help set up field hospitals.

Although some states did engage with international partners, not every state took advantage of this opportunity. We can learn from our allies, especially as many countries in Africa and Asia have excelled in public health measures to contain the virus. For future pandemics, each state in the National Guard needs to engage quickly with their counterparts in partner countries, who might offer creative insights on helping minimize the spread domestically and abroad.

The National Guard plays a wide-ranging and vital role, providing forces for missions at home and abroad. At the peak of COVID-19 operations, nearly fifty thousand servicemembers from the Guard worked on the pandemic response. Simultaneously, the Guard had personnel deployed to Afghanistan, Iraq, Djibouti, Europe, and the Pacific; responding to domestic hurricanes and wildfires; and supporting border control and civil unrest missions. Fortunately, the Army National Guard met its met its end strength goal of 336,000 servicemembers in fiscal year 2020. Nevertheless, future unanticipated missions will strain the National Guard force. The Guard must therefore anticipate another pandemic and building global response into its training and doctrine. Its ability to maintain a resilient and ready force is imperative to deter adversaries from exploiting any weakness in our ability to secure the homeland, a priority of the 2018 National Defense Strategy.

Laura Keenan is a lieutenant colonel in the District of Columbia Army National Guard who served on the 2020 COVID-19 mission as a liaison to Joint Forces Headquarters National Capitol Region, Children’s National Hospital, and the District of Columbia Homeland Security and Emergency Management Agency. She is a graduate of the United States Military Academy and is currently studying national security strategy at the National War College.

The views expressed are those of the author and do not reflect the official position of the United States Military Academy, Department of the Army, or Department of Defense, or of any organization the author is affiliated with, including the Army National Guard and the National War College.