Six Months in Afghanistan: A Progress Report from the 1st SFAB’s Inaugural Deployment 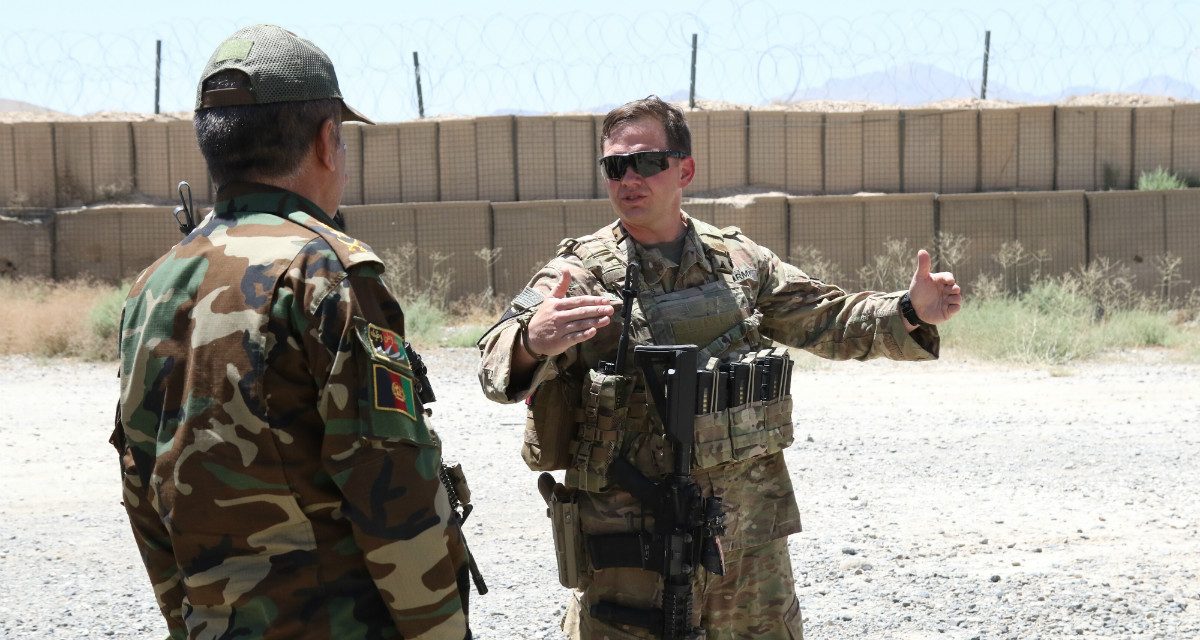 On a remote base in Afghanistan, pinned on the wall above Col. Scott Jackson’s desk, is a pinhole-marked map depicting all the locations where his 1st Security Force Assistance Brigade’s advisor teams are currently working—often alongside other coalition members—with their Afghan partners. Stacks of charts and reports are organized in piles, describing months of lessons learned and measures taken to either overcome challenges or leverage opportunities. The SFAB is aligned with Afghan National Defense and Security Forces (ANDSF)—a composite of military and both national and local police forces—across every region in Afghanistan, from the tactical units fighting in rural areas to regional training centers focused on developing individual and collective skills.

As the Army’s first dedicated, permanent expeditionary advisory unit, 1st SFAB now has six months in Afghanistan. In late July, the Special Inspector General for Afghan Reconstruction (SIGAR) published its fortieth quarterly report on progress across the country, with a special excerpt on how things are going for the SFAB so far. The report discusses two areas that are particularly key to the SFAB’s success: the potential impacts of the evolving nature of its mission and whether the gains being made now by the ANDSF are independently sustainable. The two topics are posed as questions for further observation, as SIGAR’s excerpt concludes by clearly stating more time is needed to assess those very topics.

With respect to the first of these, though, it’s important to note that an evolving mission should not be misconstrued as evidence of a flawed model or purpose. In reality, the opposite is true. Expecting Afghanistan to fit into an initial employment concept for the SFAB is backwards thinking. In fact, the SFAB was designed to deliver a service—training, advising, and assisting (TAA) in order to develop capacity within a broader portion of the ANDSF while breaking the cycle of dependence on coalition forces. If the location or level of TAA needed by the Afghans changes over time, then it is paramount that the SFAB adapt to meet that requirement.

The second topic—creating sustainable gains—will ultimately be the measure of the SFAB’s success in Afghanistan. Recognition of that fact is what drove changes the SFAB began making immediately upon arrival at the Regional Military Training Center in Kandahar Province, one of several sites dedicated to individual and collective training similar to the US Army’s Combat Training Centers. The advisors stepped into a setting where all training was delivered by contractors or coalition forces, training was not tailored to the needs of the Afghan units, and there were no plans to drive training once units arrived.

To address this, the SFAB didn’t just take over training. They coached the Afghans to revitalize the entire training center’s operations. Afghan “instructors” who were often previously relegated to menial tasks, like providing dining facility support or serving as drivers, have now been trained to deliver the training to the Afghan students. In the US Army, we call this a “train the trainer” approach, essentially using the “teach a man to fish” concept to ensure Afghans were capable of developing and delivering programs of instruction with less reliance on coalition forces. The trend in developing core Afghan capabilities is replicated elsewhere, whether it is combat focused, public affairs operations, or managing supply chains.

Looking beyond the SIGAR report, six months of continuous operations surely provides some lessons learned and planning considerations for the next five SFABs’ training, generation, and deployment preparation.

Six Months In, What are the Takeaways?

We are still at war in Afghanistan. The SFAB’s members are exposed to risk because their partners are fighting on a daily basis. To achieve their mission to train, advise, and assist the ANDSF where it is needed most means the SFAB’s advisors are often at the edge of the US-led military coalition’s support capabilities. Following the loss of Corp. Joseph Maciel to an apparent insider attack in July, Chief of Staff of the Army Gen. Mark Milley acknowledged the risk in the advisory mission. “Those guys are out there, and they’re in exposed positions and it is a high-risk situation,” he said in an interview. “So casualties are going to occur.”

None of this should come as a surprise, and it should not justify changing how the SFAB is conducting business. Afghanistan is still an active war zone, and success in war requires managing, not avoiding risk. To manage the risk, the Afghan Ministry of Defense and the coalition’s Resolute Support headquarters have launched a deliberate vetting effort of ANDSF members before advisors arrive.  This is coupled with “guardian angel” training for the advisors’ security personnel, which builds on basic personnel security requirements by also teaching more subtle indicators of potential threats, like mannerisms and body language. But, there are no measures that can completely remove risk—if the mission is important, then assuming a commensurate level of risk is appropriate.

Being the first of anything requires adaptive leadership and the qualities of learning organizations. The 1st SFAB arrived in Afghanistan in March on an accelerated deployment timeline, months ahead of schedule, to prepare for the traditional Afghan summer fighting season. Because of the vetting process combined with three years of closing down the very bases the SFAB was designed to go to, the same SFAB that was rushed into theater was initially delayed in providing TAA at lower levels in certain parts of the country. Their first month was spent rebuilding a basing footprint and building rapport with ANDSF units.

Whether the SFAB’s mission is evolving is far less important than whether they adapting to changing requirements to deliver the TAA at the right place and time to ensure ANDSF are making sustainable gains. The SFAB has been able to leverage the culture of learning and self-improvement developed during training back in the United States to make daily improvements during operations over the last few months. This means sharing lessons learned is a routine and expected occurrence, all centered on disseminating both best practices and missteps across the entire advisor community.

1st SFAB Is Doing Well, But What Should the Army Do Next?

With the 2nd SFAB ramping up at Fort Bragg, North Carolina, and three more active and one National Guard SFAB soon to follow, what should the Army be doing to ensure the success of these units? Start looking past Afghanistan. This is no small task for a new organization billed as an opportunity to allow brigade combat teams to focus on traditional, high-end conflict rather than advisory operations. Only one year into the new South Asia Strategy, it may seem premature, short-sighted, or even dangerous to again shift focus away from a conflict that has often been treated as a sideshow. But, it is necessary given future SFABs are designed for potentially very different operating environments. While the 1st and 2nd SFABs have been designed, equipped, and trained specifically for Afghanistan, the long-term plans see a broader application of the SFABs across all combatant commands. That will require the Army to carefully and deliberately weigh how Afghanistan-specific preparations should be modified to produce an SFAB model flexible enough to succeed elsewhere, as well.

As 1st SFAB has demonstrated in Afghanistan, one of the organization’s strengths is its ability to adapt to operational requirements. 2nd SFAB will be able to build on lessons its predecessor has learned to extend developmental gains even further in that country. Moving beyond Afghanistan, the Army will have to balance tailored approaches to specific countries and the unique needs of each advised force with producing a flexible table of organization and equipment, the document that outlines the personnel and equipment by types and quantity authorized for a given unit. This means a continuous process of working with supported combatant commands and host nations to determine where gaps and seams exist, and how those can best be addressed, which presents challenges for recruiting, training, and equipping future SFABs.

The Army also needs to start thinking about how SFABs train, advise, and assist once a peace and reconciliation process begins. Following a short-lived but generally successful three-day ceasefire in June, there seems to be an air of optimism about a peace and reconciliation process that has been absent in the past. While such a process is the key to ending the seventeen-year conflict in Afghanistan, laying down arms presents unique challenges and opportunities for the SFAB and the ANDSF.

First, advisors must be prepared to coach their ANDSF partners to receive former fighters who reconcile and lay down arms. June’s ceasefire indicates a willingness to set aside the grievances that have underwritten years of conflict, but a three-day holiday is not the same as a long-term end to hostilities. Such training will have to address everything from the mechanics and logistics of receiving large numbers of weapons, to working with local Afghans to accept former fighters back into society, and potentially integrating those same former fighters into legitimate ANDSF positions down the road.

Right now, the SFAB’s advisors are working with ANDSF partners who are in daily conflict with the Taliban and other insurgent forces. With the arrival of peace comes an opportunity to shift from a purely combat focus to more far-reaching efforts like formal education and training, sustainment, personnel management, and the other processes that demonstrate the ANDSF’s independence and ability to sustain the gains from years of TAA investment.

As the SIGAR report indicates, SFAB advisor teams have shifted around to meet emerging security demands. Across the SFAB advisor team locations, they are experimenting with contact time, how to best integrate advisor and ANDSF headquarters, and determining the most effective level of TAA, tailored specifically to the needs and capabilities of the local ANDSF commander and unit. Whereas previous advisory efforts often saw coalition enablers quickly brought in to assist during tactical engagements, advisors are coaching their ANDSF counterparts on coordinating for Afghan resources first. In return, the Afghans are becoming more independent. Whether that independence is sustainable is ultimately for the Afghans to determine.

In short, the 1st SFAB is doing everything it can to work itself out of a job. There is no better measure of success for an advisor.

Maj. Rick Montcalm is the Deputy Director of the Modern War Institute at West Point. An armor officer by trade, he has served in armor, infantry, and Stryker brigade combat teams, with operational experience in both Iraq and Afghanistan.