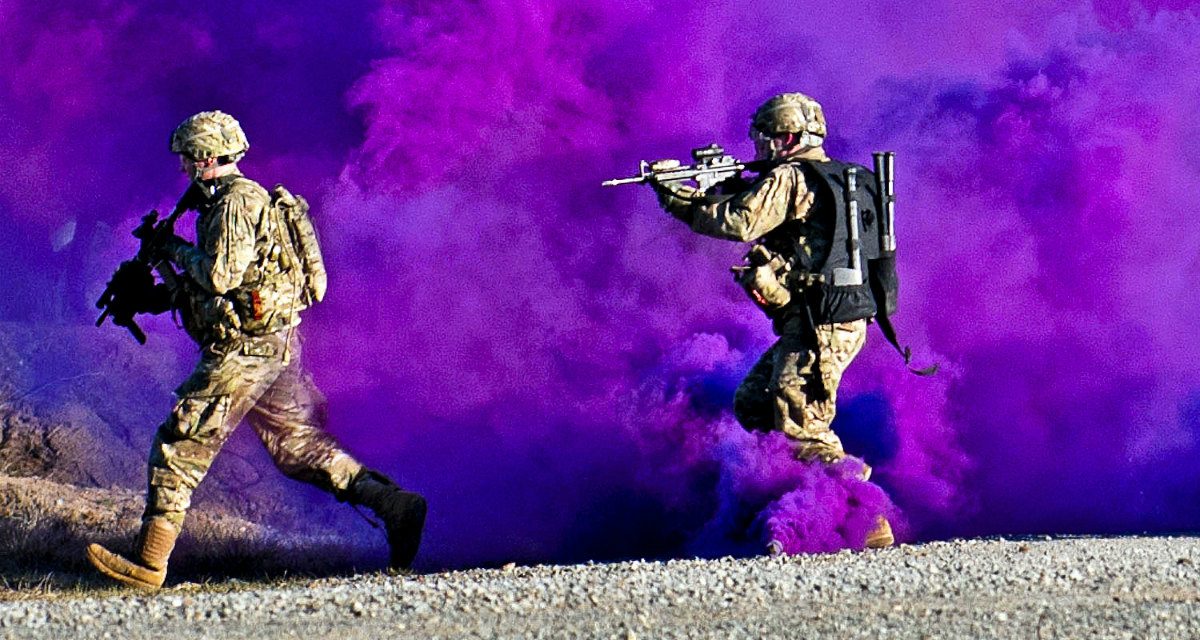 When the US military prepares to fight its next major war, it won’t be planning to fight the insurgents it has faced over the last fifteen years. As China and Russia begin to aggressively project their military might and revisionist ideas, the Pentagon must develop operational concepts aimed at outpacing technologically sophisticated nation-states.

In fact, the alarming reality is that the US military may operate at a local disadvantage in future conflicts. America can no longer assume the military advantage over its enemies on land or at sea—once the bread and butter of US power. China, Russia, and other potential enemies now boast an arsenal of advanced area denial capabilities, electronic warfare tools to disrupt communications, and precision-guided munitions that could stop American aircraft carriers or fighter jets from disabling high-value assets and enabling ground troops to enter the fray. American troops will also face massed precision fires that will threaten US assets in a future war.

The Army has advanced the multi-domain battle concept to respond to this environment, aiming to overcome local threats with small units instead of exposing major assets to anti-access/area denial (A2/AD) systems. Army leaders need to be prepared to rapidly improvise on the battlefield, operating in a world where many recent US advantages, including quickly communicating shifting orders or commands and relaying large amounts of information, are no longer available.

Swarming soldiers may offer the way to open the battlefield against an enemy focused on denying access, scrambling communications, and precisely targeting US forces. The multi-domain concept has generated buzz through its application to networked drones, such as the demonstration DoD’s Strategic Capabilities Office conducted on CBS’s 60 Minutes this spring, with over one hundred such drones that were able to communicate collectively. Paul Scharre has described UAVs’ potential to swarm the enemy.  Adapting the concept for infantry tactics will allow US ground forces to dominate in an increasingly contested environment, adding to the doctrinal development of an important niche in multi-domain battle.

John Arquilla and David Ronfeldt define swarming as “engaging an adversary from all directions simultaneously, either with fire or in force.” While swarming has the potential to be an effective form of maneuver, it is also the most information-intensive. Sean Edwards built on their theory by dividing swarming into four stages: locate, converge, attack, and disperse. He assessed that swarms require elusiveness and superior situational awareness to evade long-range weapons.

Swarming for the Infantry

On its own, information-intensive networked swarming can’t work without assured communications. Synthesizing Arquilla and Edward’s work with concepts inspired by biology, however, creates an image of a command structure useful in today’s fluid information environment. The US military can use rules-based decision making and stigmergy—the use of environmental cues to communicate—to generate self-organizing swarms that function without electronic communications.

Rules-based decision making replaces hierarchical command structures with a pre-determined set of responses to specific situations. Junior leaders’ ability to quickly apply these rules instead of relying on their command structure for guidance allows small units to act independently and speed up decision-making cycles. But while rules-based decision making creates troops that do not need direction from their higher headquarters, they still can’t organize into swarms or replace electronic communications by themselves. Stigmergy fills that role.

Stigmergy relies on coordinating indirectly through the environment. It can allow swarming units to communicate without using the network. Self-organizing systems in biology rely on proximity to other organisms, pheromone placement, or terrain clues for cues to interact. The same patterns exist in simulated swarms in artificial intelligence. Similarly, small units can use auditory and visual signs to indicate the distance, direction, and concentration of other forces massed on the battlefield. Visual signals like star clusters or fluorescent panels can serve as a more direct form of communication.

Stigmergy-based rules allow units to deduce when to attack, retreat, and how much distance to maintain with other detachments based on the surrounding environment. Relatively simple sets of rules, properly vetted and trained, can allow junior leaders to rapidly self-organize with little to no electronic communication signature to complete a mission.

The Floating Box Ambush, seen in Figure 1, demonstrates the effects of stigmergy and rules-based decision making. The soldiers conducting the ambush are given a simple set of instructions: engage approaching units, retreat when shot at, and return and engage again.

The first soldier begins the ambush by engaging an advancing enemy unit. That typically leads the enemy to respond by firing on that soldier and advancing, prompting the soldier to retreat. As the enemy advances, they move in front of the second soldier, prompting him to engage. At this point, most units under ambush will reorient themselves toward the second shooter. With the enemy unit distracted by the second solider, the first soldier can then reengage, allowing the second shooter to retreat. Neither of those troops need to communicate to pull this off.

Wash, rinse, repeat. The ambushed unit typically switches its attention between both attacking soldiers, taking a significant amount of time to reorient, decide, and act during each recurrence. The unit’s confusion will grow if it takes casualties or its vehicles are immobilized. The Army has tried this tactic in training with dizzying effects. One of the authors has seen training units facing this technique quickly become bogged down and disoriented. Two soldiers can often temporarily or permanently divert an entire platoon from their mission, and sometimes inflict a significant number of casualties.

Stigmergy for multi-domain battle will expand on this example with more sophisticated rules and environmental cues and more diverse teams. As an example, soldiers can carry small arms, and prioritize attacking dismounted light infantry and soft-skin vehicles. Others may be equipped with anti-tank weapons to attack armored vehicles or strongpoints. Still other units could target A2/AD capabilities and other critical assets such as air defense systems. In line with multi-domain battle’s vision, these small units could be the first on the ground to enable follow-on capabilities once an A2/AD network is disabled.

Rules-based decision making and stigmergy are not new ideas. Airborne units during World War II spawned Little Groups of Paratroopers, whose decentralization and initiative allowed them to have an outsized effect on German forces. Soldiers already use less robust versions of this type of decision making. Battle drills prescribe best responses to likely scenarios, including how to react to contact, attack a trench, or enter a building and clear a room.

But swarming uses rules-based decision making and stigmergy in new ways. Rather than serving as a replacement for traditionally structured units, which struggle in communications-denied environments, swarming units can fill a niche in multi-domain battle. Specialized swarming units can operate forward to destroy or disrupt adversaries’ electronic warfare capabilities or air and coastal defense systems, creating opportunities for traditionally structured units to exploit with their heavier combined arms punch. This allows swarming units to enable traditional units, while still capitalizing on traditional units’ firepower, mobility, and sustainment capabilities.

Swarming also capitalizes on the US military’s greatest competitive advantage: well-trained and experienced junior leaders. Rigidly clinging to a command structure limits rapid decision making and initiative at lower ranks. Rules-based decision making reverses that tendency and creates an advantage when US forces can’t rely on communications. Fortunately, warfare revolves around competitive adaptation, and swarming is about changing military behavior, not technology. It is easier, cheaper, and faster to adapt small-unit tactics, or swarming rules, than it is to adapt technology.

We recommend the military begin experimenting with swarming command structures to assess its viability and determine possible rules. Simulations can allow units to cheaply test different sets of rules, cues, and agent types against soldiers using avatars in real time. Once experimenters have developed sets of rules and a mix of agent types in simulation, they can move to testing swarming units’ capabilities in the real world. The Multi-Domain Task Force is designed to experiment with multi-domain concepts, and can evaluate swarming.

The use of swarming at a tactical level is not a new idea. Paratroopers, opposition forces used to train teams, and other small units have used similar techniques for decades. It could potentially, however, become even more valuable as the US Army aims to advance the multi-domain battle concept, specifically taking out high-value assets with denied communications. Technological solutions to assured communications are necessary for larger units to be able to communicate with higher commands and will require constant improvements and investment. However, for specific missions, those systems will be too risky or uncertain to rely on or they may not be worth the risk of signature exposure. The United States should turn to arguably its biggest advantage: junior leaders trained to readily adapt and show initiative in a dynamic environment. Using simple rules-based paradigms, small units can quickly swarm the ground and carry out specific missions without significant risk of detection. By doing so, these forces will enable the joint force to operate in a more contested, more lethal, and more complex world.

Justin Lynch is an Army infantryman and a member of the Defense Entrepreneurs Forum. Lauren Fish is a Research Associate for Defense Strategies & Assessments at the Center for a New American Security and was formerly a Defense Fellow for Senator Tom Cotton.

The views expressed are his own, and do not represent those of the US Army, the Department of Defense, or the US government.