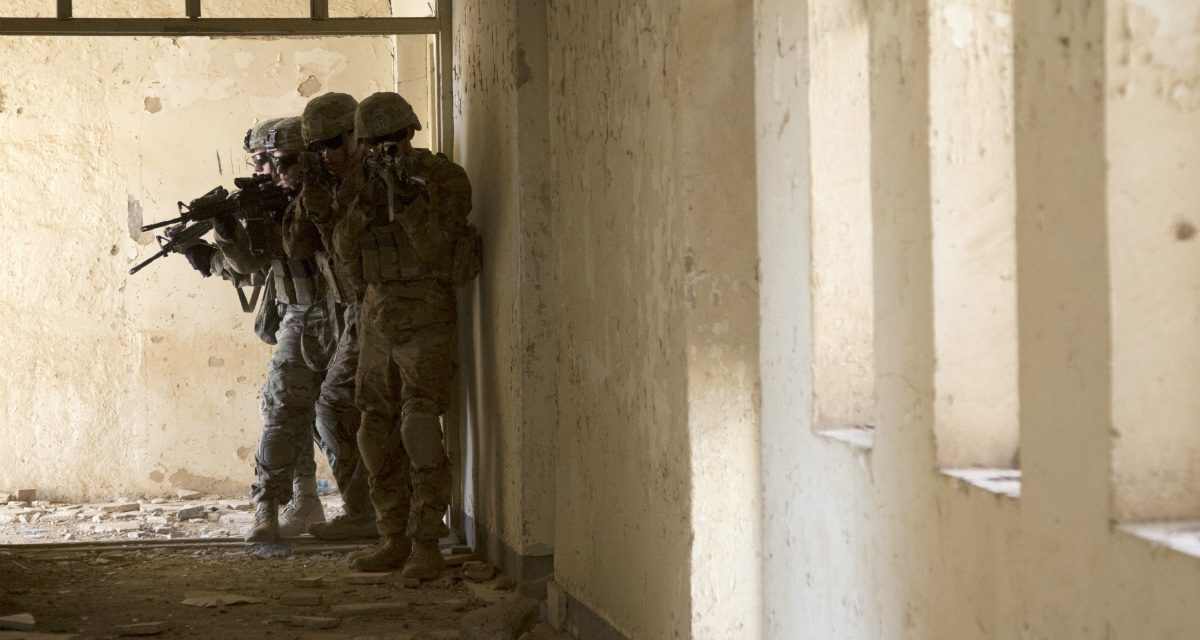 Editor’s note: This article was originally published in 2017.

There are no urban warfare units in the US Army—not a single unit designed, organized, or equipped specifically for the challenges of operating in cities. There are no research centers dedicated solely to the study of military operations in cities. There are no schools or training sites where Army units can experience, experiment, or train for the challenges of operating in places like Mosul, Aleppo, or Raqqa, where we have seen US and Iraqi forces engaged in high-intensity combat. Without a specialized unit, research center, school, or training site, taking steps to develop new ways or tools of approaching military operations in cities is nearly impossible.

In 2008, I conducted offense, defense, and stability operations in the dense urban environments of Sadr City and Adhamiyah, Iraq. For the past few years I have had the opportunity to study the history of urban warfare, conduct research on the challenges of future operations in dense urban environments, and—most importantly—creatively think through the tactical challenges of fighting in cities.

Having had that opportunity to develop a better understanding of the unique challenges posed by dense urban environments, if I was sent back into a city to conduct military operations today, I would do things differently. Below is a list of tools that general-purpose Army units do not have, but I would want. In the spirt of the holiday season I limited my list to items that can fit under a combat Christmas tree.

Tunnels, subway entrances, and sewer manholes are major problems for soldiers. I personally would not want to go down (or send soldiers down) into any of these urban subterranean environments. But in high-intensity combat, each opening has to be addressed. Each one poses a means for enemy forces to escape or come up behind soldiers as they clear building to building. Instead of going into the tunnels or holes, I want an industrial foam-throwing gun that will seal each opening as I find and move past them. Foam is already used to lift concrete house foundations, streets, and sidewalks in the private sector. Adapting this tool to the needs of the urban warrior would pay huge dividends.

A megaphone attached to a quadcopter drone could give soldiers the ability to do a tactical callout to direct people within a building to exit before a search of it—or, depending on the situation, an attack on it—begins. A speaker drone could also tell displaced personnel where to go to get aid or to avoid combat areas.

3. Keys to a mining robot

Something I regret from my urban combat experience is not considering going through buildings rather than exposing myself and my troops approaching by street or alleys. The practice of boring holes, commonly referred to as “mouse holing” has appeared in almost every major urban battle I have studied. In Nablus in 2002 , the Israel Defense Forces planned a majority of their movement through holes in walls, ceilings, and courtyards. I would want a mining robot that could drill or punch holes in walls in advance of my movements. The robot would have the software, data, and sensing capability to know where to go through walls most easily and with the least amount of damage.

The use of concrete walls in urban combat was one of the most effective weapons used in urban operations during the last twenty years. We used them extensively to reduce violence in the Battle of Sadr City in 2008. Despite the wide use of concrete in Iraq, no new methods for their employment were developed. Concrete had to be placed on flatbed trucks and lifted by commercial cranes one at a time. I’d like to see a wheel system (think Egyptians moving stones to build the pyramids) that allows concrete walls to roll directly off of a flatbed truck into position. This might have changed the maximum number of barriers we averaged a night from sixty to hundreds. A properly planned mission might be able to effectively siege enemy forces overnight.

When soldiers stand on the street in urban operations they can be seen or shot at from great distances. A curtain between two buildings would help prevent them from being seen. Local civilians in Aleppo used this technique by hanging giant curtains across buildings so they could walk from building to building without being targeted by snipers. In the past, I’ve written about the possibility of doing this using an anchoring system that is shot out of a grenade launcher, designed by West Point cadets in 2012, and some durable curtains.

Tear gas was used heavily in past urban battles such as the WWII Battle of Aachen or the Battle of Hue in Vietnam. It worked well to chase enemy troops from within buildings and ambush spots in the urban environments. This would require a policy change, since in 1997 the United States signed an international treaty banning wartime use of chemical weapons, which includes tear gas. But including it in a unit’s urban combat kit bag could save both soldiers’ and civilians’ lives.

Soldiers call the doorway of a new building or room the “fatal funnel.” It is a single point that the enemy can shoot at and know they can hit someone. Similarly vulnerable are rooftops, where soldiers can be easily targeted by sniper fire. Soldiers are sometimes required to use the low walls found on roofs to pop up to return fire or look out only a few seconds. Some police conducting urban raids in the United States use ballistic shields that can stop 7.62-caliber bullets (the bullet of choice of non-state actors around the world wielding AK-47s). Soldiers will still have to pass through doors and position themselves on rooftops, and I want a shield to protect them.

The next revolution in military affairs will be in energy, not weapons. The biggest resupply needs of soldiers in the high pace of urban battle include water, ammo, and food, but also, critically, batteries. Abandoned cars often litter urban battlefields. I would love to have a cable that I could hook to a car battery and charge any system I carry into combat.

Drone swarms have the potential to change many of the fundamental challenges of urban warfare. They could be used to distinguish between civilians and the enemy, make it harder to see attacking soldiers by creating a smoke cloud, and possibly form a wall that would protect soldiers from bullets as they move to a target.

Some of these tools may work, some may not. The force that is more flexible and can more rapidly adapt to emerging conditions during an urban fight has an immense advantage. I would want the freedom to buy and experiment with tools such as these as problems present themselves on the battlefield.

I believe strongly that urban battlefields represent the future of warfare. With that in mind, this holiday season I’m wishing for tools that soldiers fighting in urban environments today and those that will fight there tomorrow can use to solve the unique problems cities pose.