Some Clausewitzian Thoughts on the Ukrainian Defense 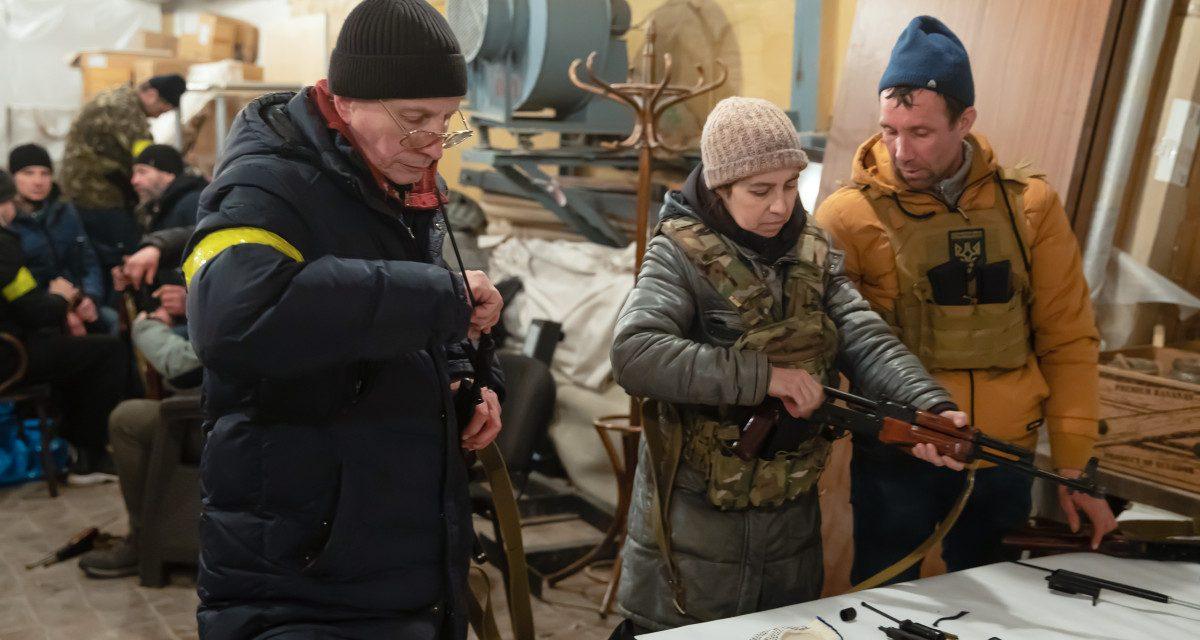 Much of the analysis on the Russian invasion of Ukraine has focused on the Russians. Why did analysts overestimate the strength of the Russian forces? Why is the Russian military performing so poorly? Why did Vladimir Putin miscalculate? The list goes on.

This article seeks to answer none of these questions. Instead, it sets out to reorient focus onto the Ukrainians. In doing so, it reveals a fundamental reason why they have been successful so far: because they have been fighting on defense.

According to Carl von Clausewitz, not only is the defensive form of warfare stronger than its attacking counterpart, but the defense also has access to additional means. These means arise out of the structure of the defense itself and are uniquely afforded to the defender. Enumerated in book six, chapter six of On War, the means include the Landwehr, fortresses, the people, the people in arms, and allies. Observing through the fog, it seems that not only has Ukraine valiantly used all of these means to its advantage, but also in a way that helps to elucidate how these means operate today.

Briefly, the defense is about awaiting the chance to strike. The attack, by contrast, chooses when to strike, but not exactly where. The defender is defending something—in this case the territorial integrity of the state of Ukraine—and that something is not completely up to the attacker. The Russians may have debated along which avenues of approach to attack Ukraine, but they ultimately had to end up somewhat southwest, where Ukraine is located. While seemingly trivial, much of the strength of defense emerges from this very fact—that the defender already exists somewhere.

As we cast a provisional glance at the war between Russia and Ukraine, we can see the dynamics of the defense in action, especially with respect to the additional means afforded to the defender. While Clausewitz’s view on the defense is mesmerizingly rich—it comprises nearly a quarter of On War—we will limit our glance to a view of the means themselves: the Landwehr, fortresses, the people, the people in arms, and allies.

First, the Landwehr, literally land defense, was an important Prussian reform that emerged in the wake of catastrophic defeat in 1806 to Napoleon at the Battles of Jena and Auerstedt. The Landwehr was a component of the Prussian response to the French employment of the levée en masse, intended as a way to generate more military capacity. While these forces can be used in the attack, they are more valuable to the defense because of moral forces, like patriotism. In order to appeal to these particular forces, the Landwehr’s use is generally circumscribed to a local area. Today, Ukraine’s Territorial Defense Forces are akin to the Landwehr. While the Territorial Defense Forces may be united with regular military forces, their use is intentionally local. Like the Landwehr, they comprise a formal system that enables citizens to defend their homes.

Fortresses provide the defense with a kind of “immovable means” that, as fixed prepared defensive positions, often factor into an adversary’s decision. As Clausewitz wrote in his Two Letters on Strategy, the strategic effectiveness of a position depends on how it affects the adversary’s decision. An attacking force can bypass a position “without regard to the enemy being left behind,” but if the attacking force must outflank the position, then the position has determined, in some part, the attacking force’s dispositions. Additionally, in the chapter on fortresses, Clausewitz demonstrates the synergy between social and local conditions. Fortresses provide “indirect protection of the country, which they secure by their strategic importance as knots which hold together the strategic web.” They actively protect the place, while also possessing “a certain influence over the adjacent country, even beyond the range of its guns.” Fortresses may seem obsolete today, but in the sense that Clausewitz described them, they have functionally been replaced by modern military bases or urban centers. Both provide advantages to the defender and influence beyond the weapon systems within. Kyiv, among other cities, has withstood the Russian sieges. The difficulties of modern urban combat have only amplified this structural defensive advantage.

The people contain a wellspring of moral strength for the defensive. Clausewitz observes, in a quote oddly reminiscent of Sun Tzu, that the influence of the individual is imperceptible, because it is mixed in like “the cooperation of a drop of water in a whole river.” The influence accumulates and collectively the people create a kind of atmospheric resistance. Additionally, Clausewitz shrewdly notes that since the state already maintains a certain level of control over its own population, it can increase assistance “through the long-used channels of submission to the State on the part of the citizens.” Still, the most important contribution of the people is intelligence. This is not “special, great and important information” acquired by spies, but “the innumerable little matters in connection with which the daily service of an army is carried on in uncertainty.”

It is unsurprising that the defensive power of people today looks remarkably similar to the way Clausewitz described it, because humans are still human. What has changed is how technology interfaces with people at scale and at speed. Ukrainians developed apps to leverage locals well versed in patterns of life by providing a means to observe and report on what is happening in their hometowns. What Clausewitz identified as a latent distributed surveillance network, digital technology has scaled, accelerated, amplified, and distributed. Clausewitz certainly could not have foreseen the internet or social media, but he did identify the value of what we call today open-source intelligence by noting how the power of accumulating small facts, rather than great spy-worthy insights, provides a cascading means for the defender. The informational strength of the Ukrainian people has been exceptional, generating moral support, international solidarity with Ukraine, and condemnation of Russia, in addition to information of tactical value.

As the people become more and more involved in the war, however, their role is transformed. It becomes “chiefly a War carried on by the people themselves.” Clausewitz recognized the potential of this “new power,” whereby the popular sentiment of resistance converts into forcible resistance. Detailed in chapter twenty-six of book six, “Arming the Nation,” Clausewitz outlines the components of guerrilla warfare. He describes these forces as being like a “mist,” and writes that they should “collect at some points into denser masses, and form threatening clouds from which now and again a formidable flash of lightning may burst forth.” As a kind of “nebulous vapoury essence” these insurgents can persistently threaten an enemy’s flanks and lines of communication. The potential threat of a long and persistent insurgency remains a potent force. The tactics may vary, from farmers towing tanks to citizens preparing Molotov cocktails, but the purpose remains the same—harassment.

Lastly, there are defensive allies. Unlike the adversary, who is, at least, predictably adversarial, everyone else is undetermined as to whether they will be friendly, neutral, or adversarial. Defensive allies are not ordinary, Clausewitz notes, because they are “essentially interested in maintaining the land of another.” They are not like the allies an attacker may have because the interest of defensive allies derives from the conditions of the form of warfare itself. Ordinary allies, on the other hand, are only “the result of special or accidental conditions.” While the United Nations vote on the resolution to condemn the Russian invasion of Ukraine is not indicative of actual Ukrainian allies, it does demonstrate the difference in demonstrative support for the defender versus the abstention or tacit approval for the attacker. Defensive allies emerge out of concern from how the potential loss of the attacked state reverberates to the global community’s “interwoven” connections. When the map changes, the facts change. While the defensive allies’ essential interest is a kind of enlightened self-interest, it is one that is integrated into the strength of the defense as a whole.

While Ukrainian President Volodymyr Zelenskyy may be unsatisfied with the extent of international support, in terms of ammunition and assistance, Ukraine has still successfully marshaled the means to conduct its defense. Although Clausewitz’s view of the defense may seem antiquated or too particular to his time, a more modern reading unlocks the potential. The continued ability of Ukraine to resist the Russian invasion is a textbook example of the means of the defense in action. The population has taken up arms, from AK-47s to tractors, and urban combat has entailed deadly sacrifice, information about which has been flooding social media and the internet, prompting allies to supply arms as well as cooperate to punish Russia economically. If Clausewitz were here to observe and was given a few moments to calibrate to tanks and TikTok, none of the dynamics underlying the inspired Ukrainian defense would surprise him. The intellectual software he provides us remains just as valuable as it was when it was written almost two hundred years ago.

Olivia A. Garard served as an active duty officer in the US Marine Corps from 2014 to 2020. She holds a bachelor of arts in philosophy from Princeton University and a master of arts in war studies from King’s College London, and is currently studying at St. John’s College. She recently published her first book, An Annotated Guide to Tactics: Carl von Clausewitz’s Theory of the Combat (Marine Corps University Press, 2021). She tweets at @teaandtactics.