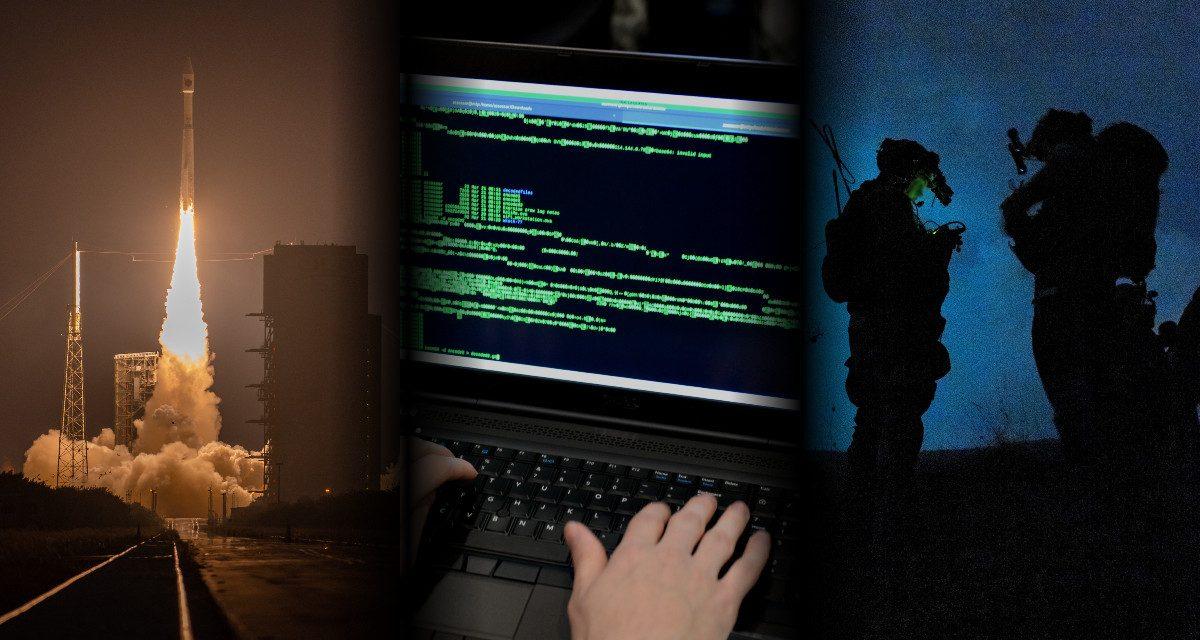 Throughout George Lucas’s depiction of the conflicts that gripped a galaxy long ago and far, far away, both the heroes and the villains employ a myriad of unconventional capabilities and tactics. They utilize mind tricks to confuse their enemies, conduct raids to penetrate secret facilities, and make use of stolen codes at critical moments. To be sure, the characters do not eschew large conventional weapons or methods—there are space fleets and massed infantry formations, huge lasers and fighter wings. Yet the preeminent warriors, the Jedi, knew that there were always other ways to fight. Lucas’s Jedi complemented conventional space war capability with subterfuge, rebels, and niche skills to influence their operational environment. Lucas portrayed a form of war that was all encompassing and had to be fought simultaneously across the entire competition continuum.

In our real contemporary operational environment, the joint force needs speed and flexibility to effectively influence across the full competition continuum, both below and in armed conflict. These characteristics are the products of an agile and open mindset—a requirement for modern military campaigning. To resource that requirement, we recommend the combination and integration of space, cyber, and special operations capabilities as a joint concept for influence that directly complements existing conventional warfighting concepts.

In order to describe the influence triad as a warfighting concept that supports the 2022 National Defense Strategy’s three primary ways—integrated deterrence, campaigning, and actions that build enduring advantages—it is useful to first consider the nuclear triad. The nuclear triad as a warfighting concept also combined multiple component capabilities to deter and influence across the full competition continuum. It fundamentally altered the path of competition and conflict for the last seven decades. However, the complexity of changes that emerged from the nuclear triad’s influence now require us to recognize that there is room for a complementary triad that can influence through alternative means across the full competition continuum. The concepts of the nuclear triad and the influence triad are inextricably linked and when employed in a coordinated effort by the joint force, could meet the intent of the defense strategy.

The US nuclear triad has delivered effective deterrence against nuclear and conventional attack since its inception in the 1960s. Its combination of land-based ballistic missiles, sea-launched ballistic missiles, and air-delivered nuclear weapons maximizes America’s advantages and presents multiple dilemmas to its adversaries. This strategic advantage has driven adversaries to develop asymmetric strategies to undermine US deterrence. These adversaries, both state and nonstate, have largely chosen to compete below the threshold of war and avoid direct conventional engagement. As a result, there is a need for a joint concept to influence and deter across the full joint competition continuum.

To counter these asymmetric threats, we propose the conceptual integration and convergence of space, cyber, and special operations forces as a triad itself—an influence triad for modern competition. This influence triad can provide integrated deterrence and active campaigning options in competition, crisis, and conflict. It does so through synchronization of mutually supporting domain capabilities that can be combined to shape the operational environment or create effects in support of strategic objectives. In application, it can offer flexible options to counter mis- or disinformation, cyberattacks, and irregular threats. The influence triad provides a much-needed menu of options for scenarios in which national security interests are potentially threatened but when hard power options that risk escalation are less preferable. Space, cyber, and special operations capabilities—both individual services’ and joint capabilities—are already significant in and of themselves, but unique opportunities exist where they converge and can be leveraged together.

Effective deterrence requires capability and will. The influence triad delivers on both, with capability in both first-strike and retaliatory scenarios, anywhere and anytime with surprise. It ensures retaliatory options are available in response to the many ways adversaries can attack the United States. Moreover, the unique characteristics of these capabilities make it easier to signal a credible willingness to use them. The nature of space, cyber, and special operations makes them less escalatory, more politically palatable, and more appropriate to competition and low-intensity conflict than conventional or nuclear hard power options. These characteristics increase the likelihood that decision makers will be more willing to use the influence triad than a costly conventional or traditional warfare option. Above all, its elements are relatively low-risk, modest investments and they offer a proven advantage for the American military. Put simply, they work. However, organizational, cultural, and bureaucratic barriers have precluded these component capabilities from being previously combined into a coherent joint operating concept.

A key aspect of the influence triad is that it converges component capability for increased effect. Individually, each component provides exquisite capability. Space generally includes communications, intelligence, electronic warfare, and antisatellite capabilities. Cyber includes both offensive and defensive capabilities. While special operations includes direct action, unconventional warfare, civil affairs, psychological operations, preparation of the environment, and special reconnaissance. This is not an exhaustive list, and yet it shows the wide range of options within each individual component. However, when integrated, the influence triad enables effects no single component can deliver by itself. With twenty-one distinct doctrinal component capabilities, recombination could produce thousands of options. For example, special operations can provide access for cyber operations; cyber can set conditions with populations for special operations; and space platforms can deliver effects and enable both special and cyber operations. Innovation is not simply invention, but more commonly, the creative recombination of existing concepts and capabilities. The influence triad offers an abundant convergence of capabilities that, when applied through the elements of operational art, can deliver potent effects.

The influence triad’s creative characteristics support the three primary ways DoD intends to advance its goals, as specified in the 2022 National Defense Strategy: integrated deterrence, campaigning, and building advantages. By joining the capabilities of space, cyber, and special operations together, options available to strategic leaders increase exponentially. The result is a more agile and flexible joint force. Further, the influence triad does not have to be employed only in a deterrent capacity; the joint force may use it to actively campaign against adversaries to preemptively undermine, complicate, and disrupt their coercive and malign activities. Convergence of the three components within the influence triad will also accelerate innovation, experimentation, and reform of the joint force to meet demands of the contemporary competitive environment.

The influence triad leverages the global reach of space, cyber, and special operations to address primary threats outlined in the National Defense Strategy. Threats posed from China, Russia, and violent extremist organizations now transcend geographical and political boundaries. Our service and joint functional component commands are already global in their thinking, approach, and presentation of forces to combatant commanders.

Conducting Multi-Domain Operations (MDO) in the twenty-first century will demand that we expand our thinking. Lt. Gen. John Shaw, deputy commander of US Space Command, has argued that the word “global” no longer sufficiently describes the full range of considerations relevant to military matters. Instead, he recommends “supraglobal” as a term that more appropriately encapsulates the full range of global terrain and space. Building on this deliberate expansion in the way the operational environment is conceptualized, we propose a new way of thinking about MDO and effects, one in which space, cyber, and special operations capabilities converge to create effects, set conditions, and achieve objectives in competition. This idea is consistent with and complementary to the convergence of domains on which MDO is premised to achieve overmatch in large-scale combat.

Building on this concept, the Unified Command Plan outlines the global nature of geographic and functional combatant commands. US Special Operations Command has global authority for leading and synchronizing planning and operations against terrorist networks, while US Cyber Command has global cyber responsibilities. Functional commands also provide forces globally to the geographic combatant commands, ensuring cross-command synchronization. The influence triad, which operates globally and is capable of conducting simultaneous cooperation and competition both below and within armed conflict, is a distinct US advantage.

The influence triad will require further development as a supporting concept to MDO. Existing gaps in our force structure will need focused analysis in order to close them. In addition, the organizations of cyber, space, and special operations are not yet fully integrated; these capabilities are functionally aligned in different commands. Solving this challenge will require consolidation of organizations for purpose and synchronization, similar to the way US Strategic Command manages separate component nuclear capabilities.

Long-range precision fires, air defense capabilities, space, and space control capabilities are integrated in the proposed structure of the Army’s multi-domain task forces (MDTFs). However, we have not fully developed potential cyber or special operations representation, with a consequent lack of information advantage formations and concepts. This is a gap in multi-domain thinking, which has focused on large-scale conflict at the expense of more common and likely scenarios of competition, crisis, and low-intensity conflict. By conceptualizing and organizing to execute competition with the influence triad, the MDTFs will increase their operational capability and, in turn, drive demand. Increased demand and usage during lower-end competition will make the MDTFs, through increased sets and repetitions, better trained to execute operations in less likely, but more demanding, high-intensity scenarios.

For influence triad capabilities to have a deterrent effect, they must be effectively communicated or revealed to adversaries. However, there is a tension between communicating space, cyber, and special operations capabilities and the inherent and necessary protection of them. Willingness to use the influence triad in competition can demonstrate our ability to converge cross-domain effects without divulging sensitive capabilities. Demonstration may also reinforce diplomatic messaging that malign actions in competition or low-intensity conflict will be met by the convergence of effects.

Finally, from a defense management perspective, the long, slow, and cumbersome acquisition process could inhibit the influence triad’s agility. Significant upstream acquisition will be required to ensure the operational and tactical convergence of space, cyber, and special operations effects. The components must communicate, coordinate, and synchronize at the enterprise level early and often.

Like the nuclear triad, the influence triad maximizes US advantages and presents multiple dilemmas to adversaries, forcing them to recalculate costs and gains, particularly within the competition continuum. Further, the influence triad is complementary to the traditional nuclear triad—not a replacement. It will provide integrated deterrence and options for campaigning across the full joint competition continuum. Conceptually, the influence triad provides first-strike and retaliatory capabilities, along with less escalatory options for strategic leaders compared to conventional or nuclear capabilities. It also appeals to the global nature of component commands and aligns with emerging multi-domain and convergence doctrine. As an emerging concept, we suggest further organizational construct analysis, concept development, and capability acquisition to enable convergence. Once resourced, organized, and integrated by the joint force, the influence triad will provide a unique cross-domain national defense capability for a modern operational environment. The influence triad, like the Jedi Knights of popular science fiction, can provide a flexible and agile combination of capabilities that can achieve effects across the full joint competition continuum and particularly at the lower end of conflict.

Brigadier General Guillaume “Will” Beaurpere is the commanding general of the US Army John F. Kennedy Special Warfare Center and School and recently served as the deputy commanding general for operations of US Army Space and Missile Defense Command.

Colonel Ned Marsh is a US Army Special Forces officer with Army and joint experience throughout Asia, Europe, and the Pacific.