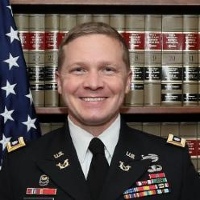 Dan Maurer is a judge advocate and former combat engineer officer.  He serves currently as an assistant professor in the Department of Law at West Point. He was selected as nonresident fellow for the Modern War Institute from 2018 to 2021.  Dan served two tours in Iraq, the first as a platoon leader attached to an infantry battalion task force, and the second as the senior legal advisor to the theater engineer brigade.  He was the first judge advocate officer selected to serve as a strategist fellow on the Chief of Staff of the Army’s Strategic Studies Group.

Immediately prior to arriving at West Point, Maurer served as the chief of operational law for US Army Southern European Task Force, Africa, headquarters in Vicenza, Italy.  In that role, he was the principal legal advisor to all operational and strategic planning efforts and participated as both legal counsel and legal instructor during joint, interagency, multinational, and bilateral exercises in Morocco, Rwanda, and Ghana.

He has written and co-edited books on civil-military relations theory and practice, published more than a dozen law journal articles on military justice-related subjects, and has contributed more than two dozen peer-reviewed essays to Lawfare, Just Security, War on the Rocks, CAAFlog, Articles of War, and MWI.  He has been invited to guest lecture or present at Columbia University (on civil-military relations), George Washington University School of Law-hosted conference (on war crime pardons), The Ohio State University (on civil-military relations and operational legal advice under the law of war), the Royal United Services Institute (RUSI) in London (on ethics with advanced combat-purposed AI) and the French military academy (on military justice).

He was a distinguished military graduate from the ROTC program at James Madison University (BA in political science); he has a juris doctorate from The Ohio State University, and an LLM from the Judge Advocate General’s Legal Center and School. He is licensed to practice law in Ohio and for the army worldwide.