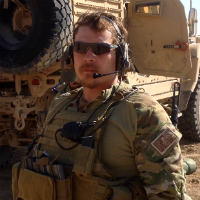 Sgt. 1st Class Donald Patton currently serves as the NCOIC of the Modern War Institute. He is also the NCOIC of the Irregular Warfare Group club and an officer representative with the wrestling team and the dive club. Patton joined the US Navy in May 2001. Upon completion of Navy recruit training, Patton proceeded to Aviation Electronic Technician school located at Naval Air Station Pensacola. Patton was then assigned as a plank owner on board the USS Ronald Reagan, where he served for about a year and a half until cross decking to Naval Air Station Oceana sea duty. While assigned to NAS Oceana, Patton deployed on the USS George Washington, USS Dwight D. Eisenhower, and to the Persian Gulf in support of Operation Iraqi Freedom in 2005–2006 while onboard the USS Theodore Roosevelt. Patton accumulated a total sea time of two years during his sea rotation. During his shore duty rotation, he was assigned to Naval Station Norfolk’s Aircraft Intermediate Maintenance Department.

Patton transferred to the Army in mid-2008, attending the Warrior Transition Course at Ft. Sill, Oklahoma, followed by infantry training at Ft. Benning, Georgia. While there, he was offered the chance to attend Airborne School and if successful the opportunity to attend the Special Forces Qualification Course.

After graduating from the Special Forces Qualification Course in 2011, Patton was assigned to ODA 5425 as an engineer sergeant. In May 2012, Patton attended and passed the Combat Diver Qualification Course in Key West, Florida. He then deployed to Kuwait, which was followed by a deployment to northern Afghanistan in 2013–2014. Upon returning home, Patton was assigned to ODA 5435 as the senior engineer sergeant, deploying to Iraq in 2015 in support of Operation Inherent Resolve. Following this deployment, Patton was assigned to ODA 5325, again as the senior engineer sergeant, deploying once again to Iraq in 2016. In 2017, he was offered a position within the 5th Special Forces Group (Airborne) dive locker. While at the dive locker he became the head instructor for the 5th Group Maritime Assessment Course and later the NCOIC of the dive locker, managing all diving operations and training for 2018.