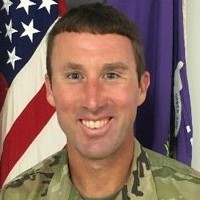 Major Grant Barge enlisted in the army in 2003 after being a two-sport athlete and graduating from Palm Beach Atlantic University. He served as a rifleman in the 2nd Ranger Battalion, 75th Ranger Regiment and deployed to Iraq before a training accident forced his medical separation in 2005. He recovered, and with the help of Congress after four failed attempts, received a medical waiver to continue service. In 2007, he graduated from Officer Candidate School and commissioned as an infantry officer.

He served as a platoon leader for 4th Brigade, 10th Mountain Division and deployed to Sadr City, Iraq, in 2008–09. Upon return, he competed and placed in the 2009 Best Ranger Competition at Fort Benning, GA. Maj. Barge transitioned to Civil Affairs in 2010 and was assigned to the 96th Civil Affairs Battalion (Airborne) (Special Operations) where his team became the first civil military support element to deploy to Lebanon in response to the Syrian Civil War. He then commanded HHC, 96th CA Bn (Abn)(SO) from 2013–15 before moving to United States Army John F. Kennedy Special Warfare Center and School (USAJFKSWCS) as an instructor at the Special Operations Forces Captain’s Career Course. During his tenure, he was awarded the 2016 Special Operations Officer Instructor of the Year and was the runner-up for all Training and Doctrine Command. His assignment at USAJFKSWCS concluded with command of HHC, Special Warfare Education Group before attending and graduating from the Naval Postgraduate School in 2019. He was awarded a master of science in defense analysis in the special operations/irregular warfare track.

His soccer-loving family consists of wife Meg and their two children.