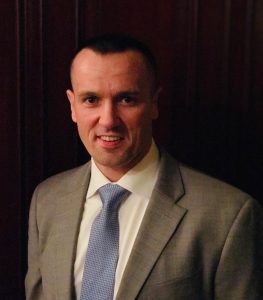 He served over twenty-five years in the Army as an infantry soldier having held ranks from Private to Sergeant First Class and Second Lieutenant to Major.

His assignments as an Army officer included two combat deployments to Iraq as both an Infantry Platoon Leader and Company Commander, a Ranger Instructor with the Army’s Ranger School, a Joint Chief of Staff and Army Staff intern, fellow with the Chief of Staff of the Army’s Strategic Studies Group, Strategic Planner and then Deputy Director of the Modern War Institute where he was instrumental in the design and formation of the institute.

He holds a Master of Policy Management from Georgetown University.

He lives in Colorado Springs, CO, with his wife and three children.  He looks forward to connecting via Twitter @SpencerGuard.

“What the Walls of Westeros Teach Us about War and Warfare,” In: Winning Westeros: How Game of Thrones Explains Modern Military Conflict, Potomac Books, 108-118, 2019

“The City is Not Neutral: Why Urban Warfare is So Hard,” Modern War Institute, March 4, 2020

“The Return of Tunnel Bombs: A Medieval Tactic on the Modern Battlefield,” Modern War Institute, December 30, 2019

“The Power of Op-Eds: How to Inform and Influence,” Modern War Institute, December 5, 2019

“How our recent Medal of Honor shows a weakness in military power,” Military Times, July 15, 2019

“Every City is Different. That’s Why a One-Size-Fits-All Approach to Urban Operations Won’t Work,” Modern War Institute, May 30, 2019

“The Destructive Age of Urban Warfare; Or, How to Kill A City and How to Protect It,” Modern War Institute, March 28, 2019

“Why Militaries Must Destroy Cities to Save Them,” Modern War Institute, November 8, 2018

“Who will challenge and check the military now that Sen. John McCain is gone?” USA Today, August 29, 2018 (coauthored)

“Investing in understanding cities is investing in national security,” The Hill, August 6, 2018 (coauthored)

“The coming cyberbattle will be worse than people think,” Fifth Domain, July 9, 2018

“Prepare the Army for the Future Urban Battlefield,” Army Magazine, May 16, 2018 (coauthored)

“How the military is making it hard to remember our wars,” The Washington Post, November 10, 2017

“Giving military equipment to police will not lead to safer streets,” The Hill, September 20, 2017 (coauthored)

“Why America Is Destroying Iraqi Cities to Save Them,” The National Interest, August 23, 2017

“So You Think the Army Can Avoid Fighting in Megacities,” Modern War Institute, May 16, 2017 (coauthored)

“The Army Needs an Urban Warfare School and it Needs it Soon,”  Modern War Institute, April 05, 2017

“What an Army Megacities Unit Would Look Like,” Modern War Institute, March 08, 2017

“The Most Effective Weapon on the Modern Battlefield is Concrete,” Modern War Institute, November 14, 2016

“Unplug, Soldier! Too Much Online Time is Hurting the Army,” Defense One, September 27, 2016

“No, Actually Transgender Soldiers Make Us A Stronger Military,” The Huffington Post, July 13, 2016

“The Challenges of Ranger School and How to Overcome Them,” Modern War Institute, April 12, 2016

“Horse Soldiers in Afghanistan and the Cost of War,” Modern War Institute, April 11, 2016

“It’s not ‘a man, man’s world’ and neither is war: Gender integration in the Infantry,” Foreign Policy Magazine, September 15, 2015

“Dr John Sullivan and MAJ John Spencer – The Complexity of Modern Urban War,” The Break It Down Show, June 27, 2019

“The Next Battlefield: Connected, Augmented and Urban,” The Future of Everything podcast, Wall Street Journal, October 24, 2018

“War with robots: how battle bots will define the future of ground combat,” Army Times, February 13, 2020

“Would the Coronavirus Quarantine of Wuhan Even Work,” Wired Magazine, January, 22, 2020

“The world doesn’t realize the extent of the tunnel threat,” Israel Hayom, December 31, 2019

“Why US troops ‘flattened’ Raqqa and Mosul, and why it may herald an era of ‘feral city’ warfare,” Military Times, April 30, 2019

“The US military is getting ready to fight underground — here are 10 things it’ll need for subterranean combat,” Business Insider, February 26, 2019

“Last days of the Caliphate and why ‘defeating’ ISIS could mean a catastrophic rebirth,” The Mirror (UK),February 15, 2019

“How U.S. Soldiers Are Using Their “Warhacks” To Transform Combat,” Fast Company, October 09, 2017

“Interview with Major Spencer about the future of urban warfare in megacities: “Stalingrad was a very rare episode!,” Global Review, September 30, 2017

“Women in the infantry: How the Army is growing its first female enlisted grunts,” The Army Times, May 21, 2017

“How do We Rebuild Cities After War,” presented at the New America Future of War Security Forum 2019 conference, Washington, DC, April 29, 2019

“The Battle of Sadr City, 2008,” presented at Warwick University during the “War in the Global City,” urban warfare conference, December 7, 2018

“Urban Operations: The Future is Here,” presented at the Royal Military Academy Sandhurst, Camberley, UK, May 1, 2018

“An Urban Lens: A Call to Arms for New Ways to Look at the World,” presented as the keynote at the 2017 Arizona State University Dense Urban Area Curriculum Workshop, Tempe, AZ, February 28, 2018

“If Warfare Has Moved into Cities, Why is the Military not Preparing,” presented at Center for Strategic Studies and the International Security Program at the Fletcher School of Law and Diplomacy, Tufts University, Medford, MA, February 26, 2018

“Operating in the Red: An Army Officer’s Autobiographical Account of Resilience from the Front Lines,” presented at the American Psychological Association, annual convention, Washington, DC, August 8, 2014