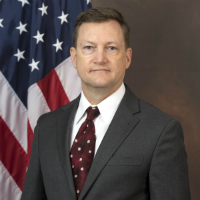 Dr. Jonathan D. Arnett is the Director of Research at the Modern War Institute at West Point. Jonathan graduated from the US Air Force Academy in 1992, earning his commission and BS in political science. He has a PhD in political science from the Nelson A. Rockefeller College of Public Affairs and Policy at SUNY-Albany, a Master of Military Operational Art and Science from the Air Command and Staff College, and a Master of Strategic Intelligence from the Joint Military Intelligence College.

During his Air Force career, Jonathan worked in a number of functional areas including intelligence, strategy, information-psychological operations, administration, training, and education. Jonathan was a targeting officer for four assignments including at 9th Air Force; Joint Task Force–Southwest Asia headquarters; US Central Command headquarters, and NATO’s Deployable Air Command and Control Centre in Poggio Renatico, Italy. He also served as the Air Force senior politico-military and terrorism analyst for the Middle East supporting the Air Staff and representing AF/XOI to the National Intelligence Council, daily intelligence briefer to the secretary and chief of staff of the Air Force, and intelligence flight commander at the 8th Operational Support Squadron, 8th Fighter Wing, Kunsan AB, South Korea.

Jonathan was a strategic analyst on the personal staffs of Adm. William Fallon, Gen. Martin Dempsey, and Gen. David Petraeus, and a speechwriter to Lt. Gen. John Allen at US Central Command, conducting independent research and providing independent counsel regarding the strategic effects of US operations in the Southwest Asia area of responsibility.

After twenty-six years of commissioned service, Jonathan concluded his Air Force career as a lieutenant colonel and an assistant professor of national security studies at Air Command and Staff College, where he taught International Security, War Theory, and Joint Air Campaign planning.